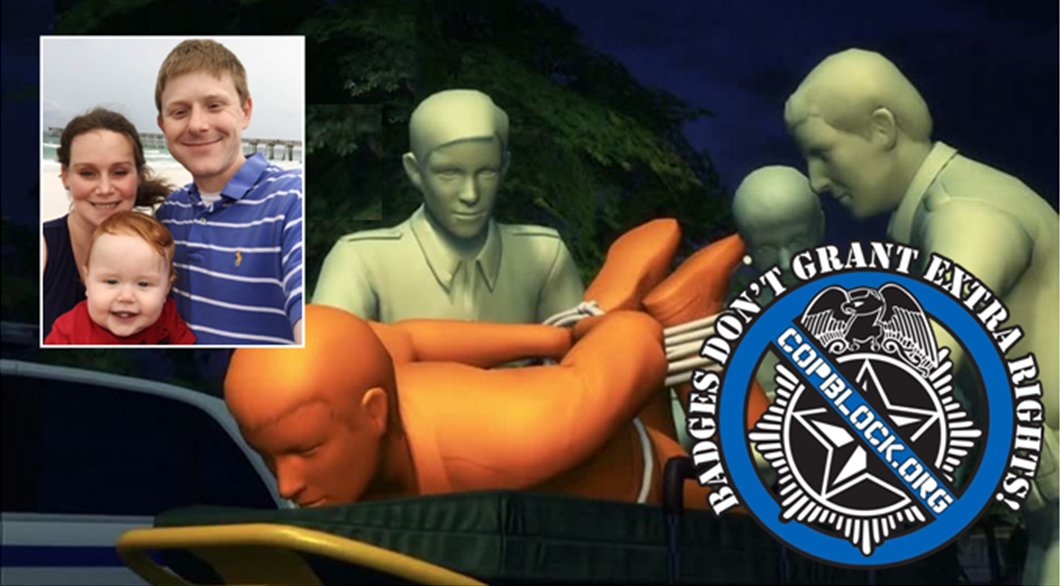 The family of an asthmatic Tennessee man is alleging in a federal lawsuit that their loved one died during a police interaction last year because the cops tased and hogtied him for an extended period of time making it difficult for him to breathe properly.

Thirty-year-old chemical engineer Troy Goode had reportedly been drinking and taking LSD before traveling home with his wife from a Widespread Panic concert in Mississippi on July 18.

Attorneys said Goode jumped out of the car and began running around outside a shopping center when Southaven, MS police were called and responded to the 3400 block of Goodman Road at around 7:30 p.m..

Officers aggressively confronted Goode before he opened the door to a K-9 patrol car and let the dog out, according to witnesses, who said the cops then subdued the man by hogtying his hands and feet behind his back and placing him face-down on a stretcher.

Attorneys said witnesses claimed to have heard Goode screaming that he could not breathe before police arrested him for disorderly conduct and took him to a local hospital – where he died around two hours later.

Southaven police have not released many details or comments about the incident but attorneys for Goode’s family have claimed they have reason to believe that a bystander recorded video of the incident – though that footage has not yet came to light.

Mayor Darren Musselwhite had previously said “…the facts indicate that [Goode] died from a heart problem likely caused by his decision to use dangerous and illegal drugs” – particularly LSD.

District Attorney John Champion had claimed as much also, and blamed the death on a supposed heart condition the man had – but according to medical professionals that viewed the toxicology report, there is “nothing to indicate that the victim had a prior history of cardiac related illness.”

The report, completed by the Mississippi State Medical Examiner indicates that at the time of his death, Goode’s blood contained less than half the minimum “threshold toxic dose” of lysergic acid diethylamide (LSD) – about 1.0 ng/mL.

According to one reputable academic study, an individual who accidentally consumed a dose roughly 70,000 times more than what was found in Goode’s system, “survived with hospital treatment and without residual effects.” Additionally, the study asserts that there have been “no documented human deaths” from LSD.

In addition, an independent autopsy obtained by Goode’s family indicates that the death had nothing to do with the mans ingestion of the drug, and had everything to do with being tased and hogtied by police like an animal.

“He was suffocating. His heart increased into what is called tachycardia,” Goode family attorney Tim Edwards said. “There is no scientific basis to attribute his death to LSD.”

On Wednesday, the Goode family filed a lawsuit in federal court seeking more than $150,000 damages that names – along with officers and the police department – the city of Southaven, the hospital their loved one died at, an emergency medical worker, and others.

According to the suit, when Goode opened the door to the police car, a K-9 got out and a police officer allowed the dog to attack him – which forced him to the ground and bit him several times on his left arm.

The lawsuit says after Goode “attempted to get up,” a police officer then “drew his ‘taser’ gun from its holster and willfully, intentionally, wantonly, with reckless disregard for decedent’s well-being, shot Troy in the back.”

It was at this point, the suit alleges, that officers hogtied Goode and left him face down for more than an hour and a half while he was being transported to, and then in the emergency waiting room of, Baptist Memorial Hospital-Desoto – where he had been taken to be treated for the dog bites.

“Troy arrived at the Emergency Department still prone, strapped down and hogtied,” the suit says. Even though his vital signs showed he needed oxygen, the hospital staff “did not supply Troy with a supplemental source of oxygen.”

“Hogtying is well-known to be deadly,” the suit added.”Troy’s death is not a simple case of negligence. Instead, it reflects a systemic failure and willful violation of civil rights by the defendants.”

Supporters of Goode – who was survived by his wife and 15-month-old child – have encouraged people to use the hashtag #ICantBreathe when sharing his story on social media.

The phrase became popular with protesters and police accountability advocates in the wake of the death of another asthmatic man, Eric Garner, who died at the hands of a NYPD choke-hold in 2014.