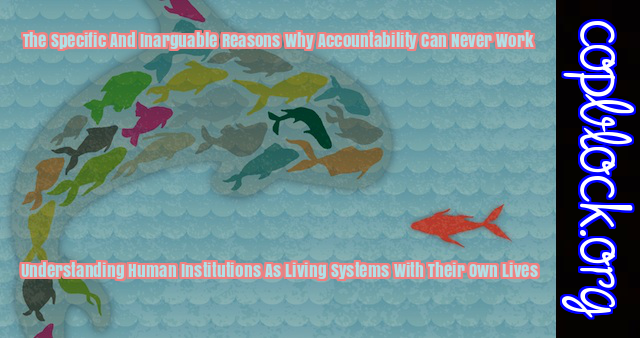 In recent articles I have discussed why accountability is not even a possibility. It seems that the reasoning is not getting through to many who continue to insist on countering with points that my arguments clearly already debunked. So I have written a far more detailed explanation of why the laws of nature inevitably conclude that police and the state cannot be reformed and are a danger to humanity that must be abolished.

Understanding Human Institutions As Living Systems With Their Own Lives

Our human hubris reassures us that we are the dominant form of life on this planet. This is done through a delusional semantic trick by which we have narrowly defined what constitutes a life form. So long as we keep that definition confined to traditional narratives, the delusion prevails. We are currently empowering that falsehood by insisting that life conforms to some basic principles based on physical characteristics, such as a genetic structure. This materialist fiction, predicated on a metaphysical assumption that is full of circular reasoning and self-refutation, then goes on to define life by what it IS and not by what it does; thereby employing the logic of every narrow-minded bigotry to ever exist.

So if instead of defining life by what it is, perhaps we should define it by what it does. And once you begin viewing life from the perspective of it’s verb-state, rather than it’s noun-state, it begins to become clear that our current definition of life is narrow, restrictive and exclusive of other macro-systems that behave exactly as we do.

In 1978 James Grier Miller published a theory under the title Living Systems: The Basic Concepts. READ IT ONLINE HERE FOR FREE.
Do a quicky wiki HERE to get the basics of his basics.

In it he discusses how non-random organizations behave in the very same ways that everything from cells to plants and animals do. He defined several levels at which all living systems tended to do at least one or more of the following- process energy, matter or information in their environment. At the micro level he considers the cell the smallest LS, with the nation state at the other end. We organisms are only the third most complex LS’s of eight, with the supranational LS at the top. In relative evolutionary terms, the supranational entity is pretty recent.

At every stage above us in the complex matrix of living systems interacting with one another there resides a life form dominate to us. The power, influence and abilities of these entities are greater than any human could ever achieve, which is why the socially aberrant psychotics that work most closely with these systems attach themselves to them. Their opportunism is essentially waste management of a more dominate life form, like bacteria that turn organic waste into proteins that can be converted to energy. The ruling elite are the lips of humanity, suckling directly from the rectums of these more dominant life forms like some kind of Human & Nonhuman Centipede flick. Since they get first taste and are not the ones being fed to the dominate life forms, they are perceived as dominate human beings. Their power, influence and wealth are all products of their gleeful association with the predatory entities who lie above us on the food chain.

This truth about the nature of life forms is precisely why it is not possible to expect these living systems to stop harming us. When we think of entities like the nation state as something we have full control over and can use to limit and punish itself, it is akin to carrots believing that they can prevent humans from eating them by appealing to humans to put carrots lives above their own nutritional needs. The nation state cannot be made to stop preying upon us in order to meet our preference for not being consumed by it, because it has to eat and we are a plentiful (and apparently delicious) food source in its environment.

Terms like ‘accountability’, ‘regulations’ and ‘checks and balances’ are meaningless misnomers that we have weaved into our delusion of superiority. To those entities above us, those terms are like camouflage or other evolutionary paradigms that make it easier for them to trick their prey. For us to believe that we can make these higher order systems put us before themselves is a foolish vanity supported only by our self-deception, which exists only to support our vanity itself. It is a circular reasoning that makes us weak and keeps us obedient to the predatory entities and the humans who work most closely with them.