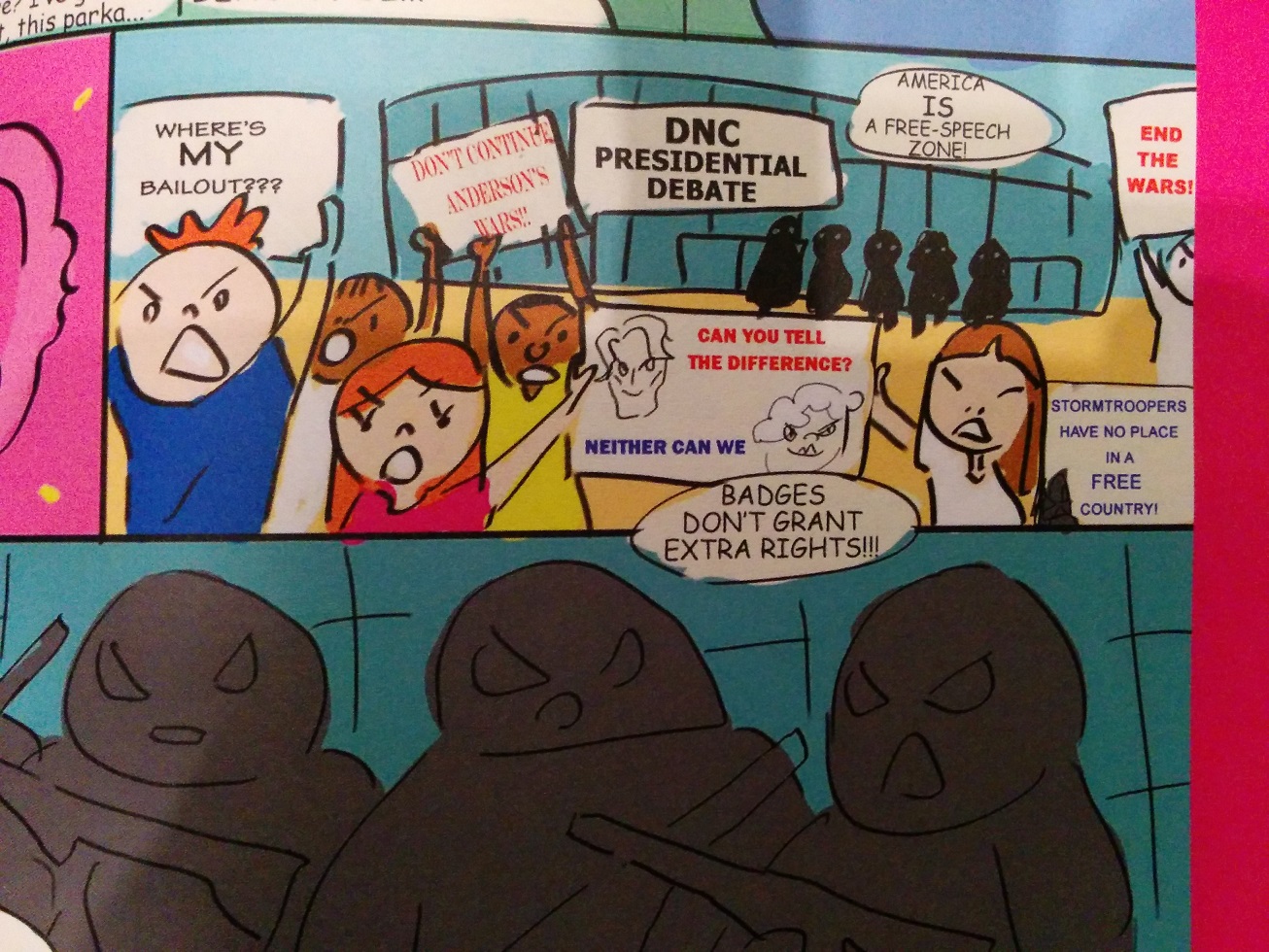 Urban Yogini, a comic series written by Bretigne Schaffer, chronicles a young lady’s adventures, and ultimately activism, in a growing police state. The first volume is called The New Face of Terror, and opens with the struggles of Kyra, a young woman who finds herself trying to make ends meet in the big city. She ends up participating in some free yoga classes and attending a yoga seminar led by a cat named Krishna Purr. After leaving the seminar, Kyra witnesses an act of police violence on her way home. The police are illustrated in the form of hulking, shadowy, black figures that are more robotic than human. A disabled man is being battered by police over a minor offense, and the circumstances are clearly an allusion to the brutal beating and murder of Kelly Thomas by Fullerton Police. As Kyra becomes enraged at the injustice, she finds herself involuntarily transformed into a supernaturally powerful hero (with extra limbs to boot). In her superhero form, she deters police, and saves the victim. In her fury, she attempts to bash the two police officers’ heads together, but she finds herself unable to do so (thus “A Superhero Who Can’t Use Violence”). While initially baffled by her inability to employ violence, Kyra eventually comes to embrace and understand what is essentially the non-aggression principle. The comic touches on many facets of a highly regulated society, such as authoritarianism, colluding politicians, “democratic” values, and a corrupt banking system. Schaffer tackles complex subjects with creative metaphors and colorful characters, including an gigantic villainous purple octopus. She elegantly illustrates the philosophical problems with the Occupy movement and the danger of seeking political solutions for social ills. Most relevantly, this graphic novel is rife with real-world examples of police violence with which Cop Block readers are intimately familiar, such as use of SWAT raids in response to sale of raw milk, and threats against people who film police: The police in this fantasy world similarly abuse their power and declare that maybe police haters and critics can “try calling a crackhead” if they don’t appreciate police tactics. Kyra, a mysteriously wise talking cat, and her friend take on police brutality, corrupt politicians, and the sheeple in this fun and unconventional children’s book illustrated by Santi Biondolillo, Elijah Espada, and Bretigne Schaffer. I highly recommend giving Urban Yogini a chance if you haven’t already.

Buy it on Amazon here.