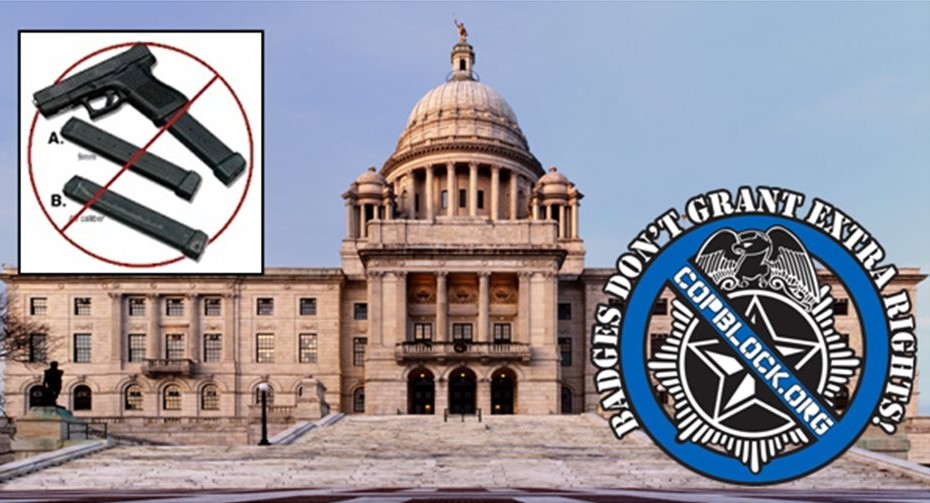 A newly purposed Rhode Island gun law would criminalize the possession of so-called “high capacity magazines” and sentence offenders to up to 10 years in prison.

Introduced on Jan. 15 by State Representatives Regunberg, Carson, Ajello, Handy, and Almeida, H7199 defines such magazines as “any ammunition feeding device with the capacity to accept more than ten (10) rounds.”

According to the bill:

No person, corporation, or other entity in the state may manufacture, import, possess, purchase, sell or transfer any high capacity magazine. Every person violating the provisions of this section shall, upon conviction, be subject to imprisonment for no more than ten (10) years.

The purposed legislation goes on to state that:

Any person who, prior to the effective date of this section, was legally in possession of a high capacity magazine, shall have one hundred twenty (120) days from such effective date to do any of the following without being subject to prosecution:

This essentially means that gun owners will be forced to give up their own private property in what is tantamount to the confiscation of their means to defend themselves in serious circumstances.

Predictably however, police officers and other agents of the state would be exempt from the legislation. The proposal says the penalties for violating the law would not apply to:

Any government officer, agent, or employee, member of the armed forces of the United States, or peace officer, to the extent that such person is otherwise authorized to acquire or possess a high capacity magazine, and does so while acting within the scope of their duties…

How many cops do you think would accept a law like this if it applied to them? Not very many. Why then is it acceptable for politicians to hinder us “little people” with a 10 round limit that their enforcers would never be willing to comply with?

In the words of the great French philosopher and economist Frederic Bastiat, who described this mindset as “the superhuman idea” in his short work, The Law:

There are many reasons one needs more than a 10 round magazine. What if you are attacked by multiple assailants? Violent criminals usually work in in tandem and act in groups. Criminals do not respect laws, that’s why they are criminals. Is it a good idea to limit your defensive capabilities by complying with a law that others wish to explicitly exploit?

What about civil disturbances that take place in the wake of things like riots or natural disasters? Have you seen the Reginald Denny beating and insanity that took place during the L.A. riots? What about the looting and destruction that took place after Hurricane Katrina? Don’t individuals that wish to protect themselves and their property need more than just a 10 round magazine in these situations?

Of coarse they do but it is telling how National Guard troops and police forces have responded to things like Katrina where they illegally confiscated firearms from lawful citizens and dragged them out of their homes. This irrevocably speaks to the greater reality of why gun ownership and the ability to possess “high capacity magazines” is so important – because one day you may have to defend yourself against your own government.

Any student of history knows this to be a very real possibility. In the 20th century alone, governments and their enforcers like police are responsiblee for killing more than 262,000,000 of their own citizens. Much of this democide followed the confiscation and outlawing of firearms that often started with things like menial restrictions.

If you are against the drug war and rationalize that there is nothing that government can do to keep people from getting their hands on the substances they wish to consume, it would be ridiculous to think that things like magazine restrictions will have some exigent affect on preventing crime or mass shootings.

The Rhode Island proposal comes on the heels of multiple executive orders issued by President Obama which are already being challenged in court by former U.S. Justice Department prosecutor and founder of Freedom Watch, Larry Klayman – who asserts the president does not have legal authority to redefine laws enacted by Congress.

Residents in the state and around the country need to stand up against the gradual encroachment against our natural and constitutional right to defend ourselves. Only criminals or those who have a gross misunderstanding of the issue would want to see the public’s access to things like firearms and magazines restricted.

Rhode Islanders are urged to contact their local representatives as well as the sponsors of the bill to voice their opposition at the numbers and emails below: