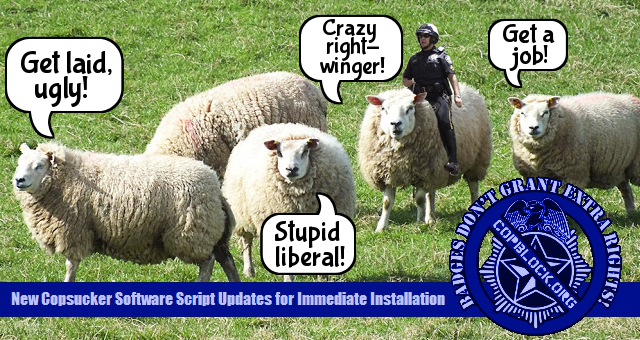 Sometimes it is hard to believe that there is more than one angry, hateful and fear-mongering fifth grader with Tourettes sitting in front of a computer screen somewhere and playing about a thousand identical characters in comments sections throughout the internet. If you were to run an analysis on copsuckers all across the vastness of cyberverse, you would find about a dozen stock statements and responses getting used over and over again. And no matter how often you counter these non-player character quips, they just keep coming back up. But repetition is not the only problem.

Most of these comments are some form of an attack that has nothing whatsoever to do with the content being commented on. And despite the fact that beginning a discussion with an insult is a pretty shithead thing to do, and that it is also an illogical way to argue, these attacks are almost all entirely untrue or massive stretches of the truth. When egregiously ignorant people who don’t know you and are not equipped for intellectual engagements decide their voice must be heard, what you end up is some really stupid shit.

So here are a few of the most common accusations that I receive. If the copsuckers reading this would be so kind as to update their copsucker software to include new scripts with the following cliches, I would really appreciate it.

There are more of these copsuckerisms, but my head already hurts just from thinking about all of the stupid repetitive shit I hear all of the time. But you can find more at our Welcome Copsuckers Page and we will continue to add to that database for as long as we are forced to repeat the same shit over and over to the standing army of cloned rhetoric drones that blast us with their troglodyte slogans on a regular basis.

So if ya’all suckers of cop wouldn’t mind updating your response apps to refresh your database of irrelevant quips and imbecile cliches, that would be great. We look forward to hearing and debunking all of the new stupid that will drool its way out of your minds in the near future.

I do have one last bit of business that I wanna add on to the end of this. Some of our supporters find it distasteful that we use the term ‘copsuckers’. While I will admit that it is not a very advanced label and that it shows a low level of sophistication, intelligence and maturity; get back to me when you spend day in and out dealing with the sort of people we reserve that label for, and tell me that it isn’t just a little bit gratifying and relieving to play on the latent inhibitions, bigotries and emotional triggers of these people. Most of them would prefer to see far worse happen to us than we would to them. Just because we disagree with these dipshits does not mean we wish them harm in real life, although they often tell us what they wish would happen to us or what they would do to us and our families. And it never involves cookies or a happy ending. Even peaceful people like us need to blow off a little steam. So relax. Using the term ‘copsuckers’ is just a silly coping device we have for relieving the stress that comes with being constantly attacked for having an unpopular message. And if you have a better term that keeps intact the humorous sting of ‘copsucker’ I would love to hear it and might even consider adopting it instead in the future. But it better be good.

Click here to read more about the very real problems of anti-intellectualism in modern society.