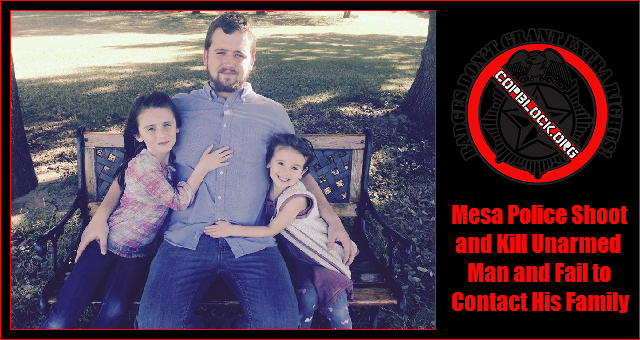 I found this story circulating through social media. Since I was unable to find any other reports on the event anywhere else in the media at the time of this writing I am going to share verbatim what the wife of the victim wrote.

My beloved husband, Daniel, was shot and passed away the evening of Monday, January 18th. All of the details are not clear right now but I feel the need to put out what we know as truth and allow the rest to unfold through proper investigation– and to dispel rumors that have been circulating in the media.

Daniel was traveling for work in Mesa, Arizona. He makes this trip 2-3 times a month and frequently services pest removal stores there. He carries his work equipment: two pellet guns (one approved for flying and one that is not allowed due to an air compressor, I believe.) among other things like a pump, ect. with him on every trip. Due to how expensive his company’s pellet guns are, he takes his hard case into his hotel room every night.

Daniel had dinner with two individuals, a man and woman, in the evening at a local restaurant. They returned to the hotel and went to his room together. I spoke with him on the phone and he had also been online and playing a game with a friend. At some point, someone near the pool called the local police stating that they saw a man with a gun near the window of a 5th floor hotel room. Whether Daniel was the one holding it or he allowed the other man to view his equipment and look into the scope, we don’t know. The man left the room at some point, for what we think was a trip to the gas station. Shortly after, three police arrived to his hotel room and Daniel and the woman came to the door. When asked to step out of the room they both did without hesitation. We were told that Daniel was not aggressive but that he failed to listen when instructing to NOT put his hands behind his back. Due to him putting his hands behind his back, the Mesa, AZ police department took forceful action and shot him. Daniel passed away in the hallway of his hotel, unarmed. His two pellet guns were in and next to his case near the window. It has been almost 48 hours and I have yet to be contacted by anyone about this matter. No notice of death, nothing. I had to do my own investigating after not hearing from him/him not showing up to work, that led me to call every hospital, jail and police station searching for answers.

Unfortunately, I did finally find him when calling the local coroner. No one had the respect or empathy to call me and our children and tell us that Daniel had been taken from us. Not only that, but not one detective assigned to the case has called me back after leaving voice mails seeking answers.

He was my best friend. The love of my life. A son. A brother. Many people’s friend. The glue that held me together. He was madly in love with his two daughters. He sacrificed being away from his family for 25 days a month so he could provide for us, in hopes one day we could all be together all the time. Our oldest, Natalie (6), is a true daddy’s girl. Anyone who has seen them together knows how much they adored each other. Emery will be turning four next week. The last time they saw their dad, we went to lunch together at Natalie’s school to surprise her before he left town. He came home, pushed Emery in the swing for awhile and said goodbye. I was upset that he had to go so he turned his truck back around and gave me three, sweet and meaningful kisses. I am so thankful that is my last memory of us together. He always did everything for us to be happy– and without his comfort, we are broken and we miss him terribly. My girls want their daddy home. I want their tears to stop and for their sweet little delicate hearts to have never experienced this traumatizing loss.

We are raising money for immediate needs like his cremation/memorial service, an attorney to properly investigate and for traveling expenses to be with his family during this time.

Donations can be made via GoFundMe (www.gofundme.com/danielmemorialfund) or to LaneySweet@Ymail.com via PayPal.

When I have energy and know more, I will post updates. For now, please allow us to have time to process this and learn to navigate through our broken hearts. **Please do not go commenting on news articles being shared per our attorney’s request**

Recently I was checking out the profile of a cop who had been harassing me online. One of the posts on his wall was about how important it was that children have their fathers in their life. The thought of how many children’s families have been broken up by the enforcement of victimless crime laws, as well as by the wrongful death of fathers and other family members at the hands of police, made me wonder if this creep was just rubbing it in our faces or whether he really was too ignorant and immoral to make the connection.

For any other LEO’s reading this, I hope you will eventually be able to see the connection between how the system of policing has broken up countless families and robbed generations of poor urban people of their fathers, mothers, children, siblings, etc. Many of you cling to traditional values that appear hypocritical in light of the immoral hellfire you rain over your fellow human beings.

Now one more family has been broken up and the killers did not even have the decency to inform the family. How long does it really take to edit all of the video and get your lies straight, Mesa PD?