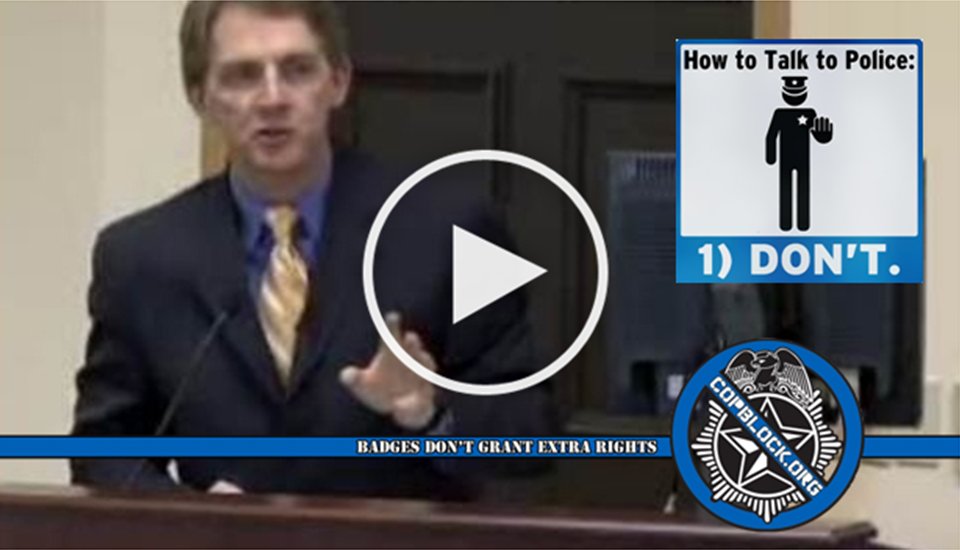 In the wake of Netflix’s Making a Murderer documentary, which primarily chronicles the prosecution of Manitowoc County, Wisconsin resident Steven Avery – who was found guilty in 2007 of killing photographer Teresa Halbach – interest in the recognized right to remain silent has been reignited amongst the populace.

The Fifth Amendment to the U.S. Constitution enshrines that outside the context of detention or arrest, a person has no duty to answer any questions of police at all; and if judicial compulsion is sought by the State, the person can still invoke his or her privilege against compulsory self-incrimination, and refuse to comply.

In 2008, Regent University law professor James Duane first delivered his “Don’t Talk to the Police!” lecture. Little did he know that it would go viral again almost a decade later with some clips shared on Facebook receiving almost 10 million views.

“I decided I would talk to them about the Fifth Amendment,” Duane recently said on a podcast. He says he delivered the lecture to his audience at the time because the Fifth Amendment is “poorly understood by the average guy on the street.”

The case against Steven Avery was in part built by comments made by his 16-year-old nephew, Brandon Dassey – a low intelligent young man who appeared to have been led and coerced by police into making false confessions.

One viral clip posted to Facebook incorporates recommendations from Duane’s 2008 lecture that may have prevented Dassey from concocting details of the crime that were never corroborated by the evidence. In addition, the law professor provides an example of just how easy it is to implicate oneself to authorities.

A professor tricked his law students into lying, and it exposed a huge weakness in our justice system.

Professor Duane, who is also a criminal defense attorney, says he hasn’t watched the Making a Murderer documentary series and can’t speak specifically to the case, but he did echo the reframe from his lecture addressing the importance of people refraining from speaking to officers without a lawyer present.

“It’s too easy, frankly, for the police to induce suspects into giving up their right to remain silent and talk,” he said. “And it’s easier than it ought to be at trial for jurors to be duped or deceived into thinking that they ought to hold it against the defendant or suspect that he must be guilty of something if he chose to exercise his right to remain silent.”

Duane said that when Fifth Amendment rights are waved, it often leads to major trouble – whether an individual is guilty or not – and maintained that “even innocent people who tell the truth to the police are often astounded to find that they just made the biggest mistake of their life.”

“I’d give individuals the same advice that police officers give to their own children,” Duane added, and asserted that even many cops tell their own family members, “Don’t ever talk to the police.”

In Duane’s 2008 lecture he outlined seven primary reasons why to law students: