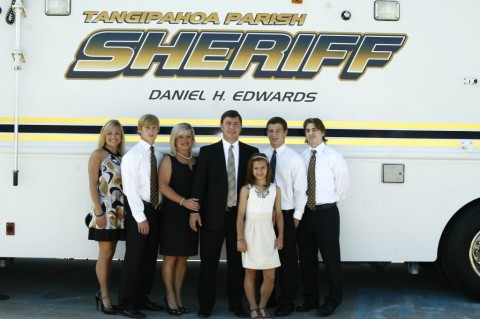 This submission comes to us from Steve Spell, a southeastern Louisiana businessman who experienced theft of his product from the individuals wearing “Tangipahoa Parish Sheriff” patches on their attire. Spell had the insight to capture the interaction on film and is working to hold accountable those who violated his rights by making it public and through a lawsuit. This is yet another incident that stems from the ridiculous notion that some people have the right to control what substances other individuals can and cannot put into their body. -Pete

The Sheriff ordered his men to enter my place of business, seize my property from me without a warrant, without due process and without payment.  Pretty cut and dried.  These same cops are in hot water from previous lawsuits for brutality.  I thank god I was able to record all of this for the benefit of the community

More on the incident from one of the area media sources that picked-up Spell’s plight by those who claim to protect and serve:

After deputies confiscated a product from The Float Dog store near Southeastern Louisiana University without a warrant on March 16, store owner Stephen L. Spell II filed a civil lawsuit against Tangipahoa Parish Sheriff Daniel Edwards, claiming that his constitutional rights had been violated.

“I was denied my rights to due process,” said Spell. “It doesn’t matter what color you are, where you are or what you do. For the police to run into my store without a warrant was very much unconstitutional. My attorneys agree that it was unconstitutional.”

The product seized is a botanical sachet called “Skyscraper the Next Level.”

“We’ve asked for a declaration that the sheriff’s actions have violated Mr. Spell’s rights, an injunction to prevent incidents like this in the future and compensation for the seized product, which was never returned,” said Spell’s attorney Vincent J. Booth of Booth and Booth APLC law firm.

According to the filed complaint, the deputies that entered Float Dog and seized the packets containing the Skyscraper product on March 16 were following Edwards’ “explicit orders.”

“They said it was morally wrong for me to sell it, and they said that somebody had illegally consumed it and overdosed on it on Friday the fifteenth, and they were taking all of it off the shelves,” said Spell.

The officers claim that a female and a male overdosed because made up the stuff about the overdose. They mention a female in the video I captured.  She has found the video made public on youtube and contacted me to tell me that the police were only there on a domestic dispute, they found the botanical sachets I had sold them and asked where she had bought them from and she said from my store.  Well there was no overdose, this was a lie.  No hospital, no medical services and since I have sued the Sheriff in Federal court we are learning through full disclosure that there was also a clear plastic baggy with green leafy residue inside also contained at the scene. Now the Louisiana State Police Crime lab has weighed in and says that the product that law enforcement seized from me without a warrant and and without due process is indeed legal!!   See attached crime lab reports.  Here is a link to some rapidly developing news stories about this case and the youtube video is actually mentioned in our full disclosures as evidence.