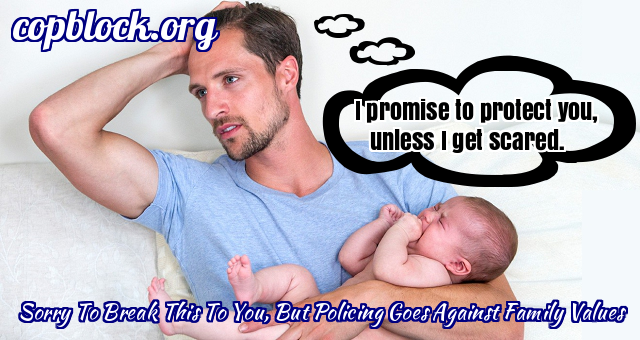 Police and their supporters are often the sort of people who talk about family values as their guiding principles. The family values that they speak of are the ‘traditional’ patriarchal values taken from episodes of Leave It To Beaver. Yet whether we were to judge the activities of police through actual family values that are pretty constant throughout time and geographical locations, or through the own quasi-mythical narrative of modern fundamentalist value systems espoused by police and their supporters, we would find that policing is in severe violation of almost all of those values.

Let us begin with a simple example. My last story was one in which Mesa police killed an unarmed man. Police apologists immediately condoned the killing on the basis that knowledge of the man’s potential possession of weapons, combined with an inability to clearly see his hands, justifies enough concern for officer safety to justify killing him. Now let us see what happens when we examine Mr. Shoot ‘Em Up Policeman under the rubric of the Loving Father archetype they see themselves as representing.

In what set of family values in any culture has it been okay to physically attack the wards in your custody because they might have done something that was not even necessarily wrong, but which made you skeptical enough about what might have or could happen, yet cannot be verified as having actually happened/happening? Would the Loving Father archetype ever strike out with deadly force against a child because the child could possibly pose a threat against them?

First of all, the family value concept in any culture would have the parent putting the child’s life before their own, even if the child was threatening them. Deadly force would never be an option. But do any family values ever make it okay to physically punish a child under the pretense of assumption and possibility? Would you punish severely somebody who you were supposed to protect only because that might have or could do something? Is that family values?

Let us look at some other concepts that are generally considered parts of family values and see if policing meets those requirements. We will continue to use the Mesa tragedy as an example, but it shouldn’t be too difficult to imagine the relationship in almost any other case of police murder.

Understanding- We have no idea why the man in Mesa put his hands behind his back. It is incredibly likely that it was a nervous habit. When there are uniformed thugs backed by the states authority with a history of killing people for little to no reason whatsoever, one would expect n individual to have some irrational reactions and nervous tics. In a family you would recognize these behaviors for what they were, a sign of fear, and you would respond by calming the person and de-escalating the situation. You would do that because punishment is only a last resort and never a first response.

Patience- A parent does not expect a child to respond to commands immediately. They realize that their children have a will of their own and therefore must follow their commands out of rational consideration rather than fear if there is to be any lesson learned. So, unlike the quick shootin’ cowboys in the MPD, members of a family will give one another a bit of time to do the right thing. Even if there is a danger involved. Family values are about more than just addressing danger, they are about support and growth.

The Benefit of Doubt- The Mesa police who killed Daniel were responding to reports of rifle-like objects being seen by the people who called 911. There was never any actual gunfire or reason to believe Daniel had committed any crime. Guns are legal. It would also not have been possible for Daniel to be holding a concealed rifle behind his back. While it is logical to predict that someone seen with some type of rifle (pellet gun) could also possibly have a handgun, there is not enough evidence in these extrapolations themselves to justify killing. Unlike a loving parent, the Mesa PD gave their victim no benefit of the doubt. They assumed the worst about him and immediately gave him the worst punishment possible.

Now take some time to consider the things that you think of as belonging in the category- family values. What are the sort of things that make a happy, harmonious family with individuals that feel nurtured, safe and valued? Do you see police treating us this way? Are the constant suspicions, accusations, punishments, selfishness, betrayals of trust and forceful superiority that police in every department exercise every day the sort of things that you would consider family values?

So why then do so many police seem to be viewing themselves as archetypes of the Strong Loving Father? Why do police supporters see an institution they think is upholding family values rather than systematically destroying them? How have policing and cultural ideas about family values become so culturally entwined when it is so incredibly simple to see how very opposite they are of one another?

People who have suffered mental or physical abuse by family members often display the same behavior. They continue to idealize their abuser in impossible ways as a coping mechanism. Their fear of their abusive family member often makes them the abuser’s greatest defender. They cannot see the whole truth about the abuse because then their entire world would crumble and that is the only thing they fear more than their abuser- the unknown. So the afraid and the abused often will delude themselves in order to avoid the shattering consequences that the truth would have on their worldview and mental/emotional states. The relationship between police and the public mirrors the abusive family model much more than it does the healthy family centered around loving values and interactions.

The fact that families with a police officer in them are far more likely than almost any other career to experience abuse is also very telling.

The truth about family values and policing is that they have nothing to do with one another. Their relationship is far more antonym than synonym. The reason you hear police and their supporters using terms like ‘family values’ so much is that it is an attempt to yell down the truth. You have seen a child who cannot handle the truth do this. You have seen adults in public who were participants in a situation in which the more clear it was to everybody else how wrong they were, would get even louder and more assured in their lies by repeating them at maximum volume. This is what police and their supporters are doing.

Family values are about building up individuals through mutual trust and respect. They are not about tearing one another down to maintain control at any cost. And that trust and respect has to be earned. It is not given automatically with a family members group status. Parents who want to raise loving, independent children will not use force, threats or a power imbalance to get what they want or think is necessary. Family values are about taking the long road as partners, not taking shortcuts to more easily control those you consider your subordinate. This assumed power balance alone means that even your Andy Griffith mythology of the good cop fails to meet the criteria of family values, because those values distribute their power for the benefit of the group, not consolidate them for the benefit of only the few.

Sorry to break this to you, but policing goes against family values.