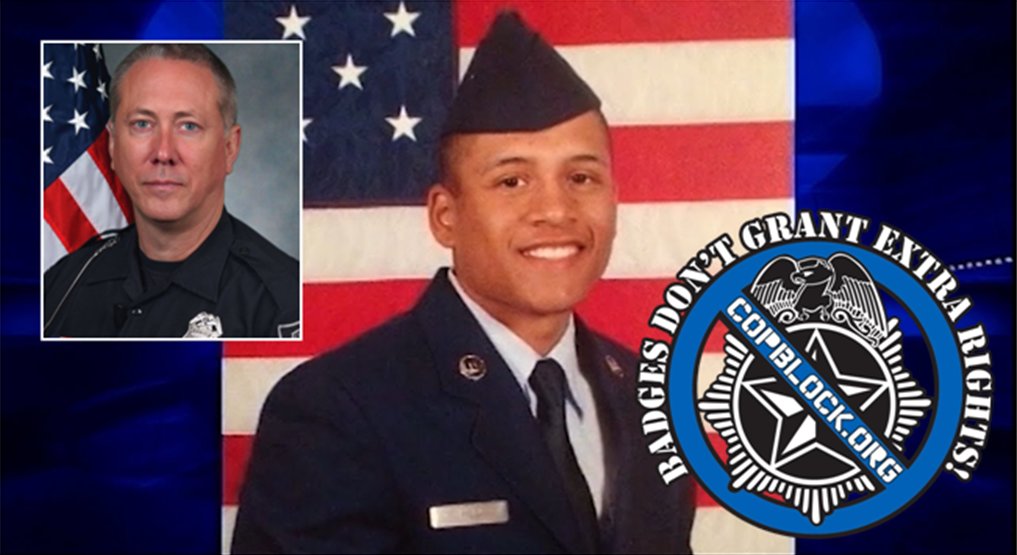 A DeKalb County, Georgia police officer has been indicted for the killing of an unarmed, naked, and emotionally unstable Afghanistan Air Force veteran that took place last year.

The news comes two weeks after prosecutors asked a grand jury to indict Officer Robert Olsen for murder and other charges. At a press conference on Thursday, DeKalb District Attorney Robert James announced that Olsen has now been formally indicted on two counts of felony murder, two counts of violation of oath of office, and one count each of aggravated assault and making a false statement.

Olsen was responding to a call about a suspicious person on March 9, 2015 and found 27-year-old Anthony Hill behaving erratically. Videos and photos taken from the scene showed a completely nude Hill hanging from a balcony, and walking and crawling around outside of his apartment building.

Police claimed when Hill spotted Olsen, “he charged, running at the officer,” before he was told to stop and Olsen, “while stepping back… drew his weapon and fired two shots” – which killed the man.

Following the incident, Hill’s family said he was suffering from post-traumatic stress and bipolar disorder, and was experiencing an emotional breakdown. They filed a federal wrongful-death lawsuit and asserted that they do not believe their loved one was “charging” at the officer. Instead, they say he was likely approaching him for help.

The family also wants to know why Olsen immediately resorted to firing his gun instead of using pepper-spray or a less-lethal device like a stun gun, and maintain that the officer has “a long and extensive history of aggressive conduct” and “propensity toward anger when dealing with members of the public.”

“We have three eyewitnesses to the shooting who say he never got within 3 to 5 feet of the officer,” Hill family attorney Christopher Chestnut has said. “He’s a veteran. He respects and honors and entrusts the uniform.”

Prosecutors presented evidence to the grand jury over the course of eight hours on Thursday. Among that evidence, included the allegation that Olsen made a false statement to another cop after the shooting stating that Hill had physically assaulted him by “pounding on his chest.”

“My job is to uphold the laws of Georgia and prosecute anyone who violates them. This case is no exception,” District Attorney James said at Thursday’s press conference. “The facts and circumstances surrounding the shooting death of Anthony Hill warranted felony murder charges.”

The indictments make Olsen the first police officer in Georgia that will stand trial for a shooting death in at least the last six years – a troubling statistic. Warrants have been issued for Olsen’s arrest but as of Thursday evening, he had not yet turned himself in.

Last month, it was revealed that roughly half of the 184 individuals killed by Georgia police since 2010 have either been unarmed or shot in the back. Every single one of these shootings were deemed lawful in the states criminal justice system without a single officer being successfully prosecuted.

A proposal expected to head before the state General Assembly this year will seek to hamper some of these special privileges by allowing officers to be questioned and cross-examined after testifying.

“This is a day in history,” Chestnut said of Thursday’s indictments. “Hopefully, this will set a precedent for discouraging paramilitary policing.”