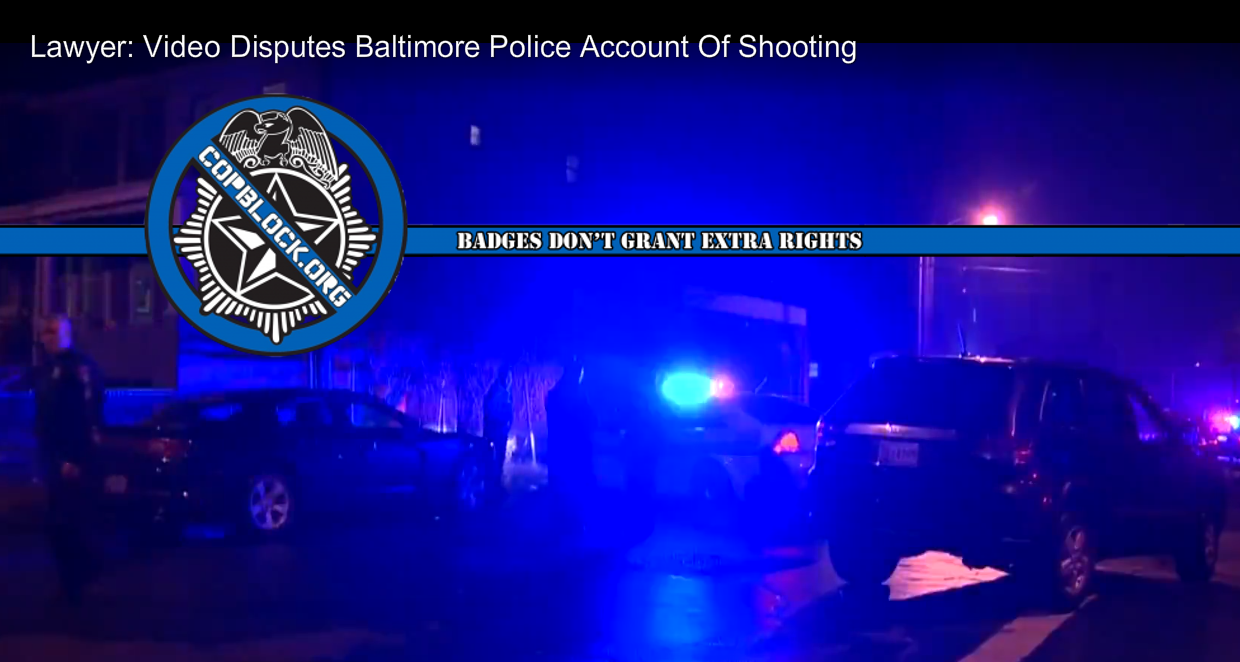 A video that was just released as part of a lawsuit by a man the Baltimore Police shot in January 2013 contradicts the claims the officers involved made to justify that shooting. In their official report, those officers claimed that Shaun Mouzon tried to run them over with his car and that they were forced to shoot him in self defense.

Instead the video shows that Mouzon was stopped in traffic with cars in front of him when they pulled up behind him. Contrary to their statements, they were never in front of his car and it never moved until after he was shot. In addition, the police report claimed that they saw a gun in his waistband and Mouzon was charged with possession of a handgun, even  though no handgun was ever found on him or in his vehicle.

(Baltimore attorney A. Dwight) Pettit gave 11 News access to the surveillance video of what happened when police stopped his client, Shaun Mouzon, on Jan. 28, 2013, in southwest Baltimore.

“You have not only the horror of the shooting and attempted murder, but then you have the horror of a fabrication of police reports to cover themselves,” Pettit said.

Officer Fabien Laronde wrote the report. He has been the subject of numerous 11 News I-Team investigations and misconduct complaints filed by residents. The city has settled some lawsuits against Laronde for more than $175,000.

“They knew at least one of these officers had a history as a bad actor and nothing was ever done against him,” Pettit said.

Laronde’s report said he observed what he believed to be the handle of a handgun in Mouzon’s waistband. Mouzon noticed the police presence and got into his car. The video shows Mouzon turn onto Edmonson Avenue and get stopped in traffic.

Laronde’s report said “Mr. Mouzon let off the brakes and began to accelerate towards the officers in front of the vehicle. At this time, a police-involved shooting occurred.”

“His car is stationary, blocked in traffic, it’s not moving. The officers walk up into the rear and to the side, and then you see the muzzle flashes, you see the officers open fire,” Pettit said.

The officers shot Mouzon 14 times in the head, chest and groin, according to his attorneys. The video shows him trying to navigate his vehicle away afterward before crashing. The police report said he fled the scene.

Mouzon was charged with several traffic violations and possession of a handgun. Pettit said his client was searched and no weapon was found on him or in his car. Eventually, the charges were dropped.

Pettit has filed the case in federal court.

As mentioned in the quote, Officer Fabien Laronde, who wrote the report, has a long history of abuse and misconduct during his illustrious career with the Baltimore City Police Department. Currently, he’s on (paid) leave after a incident in which a 7-11 called to report an armed man causing a disturbance in the store. That armed man turned out to be Officer Laronde. He’s also been banned from the Baltimore Municipal Courthouse after he was caught filming a witness with his cellphone during a trial.

And that’s not even the half of it:

It’s not the first time the city Police Department has investigated complaints about Laronde. He has been with the department for 14 years. His paper trail stretches from City Hall to the federal court to the city’s Circuit Court. City taxpayers have paid out money to settle lawsuits against Laronde more than once.

In July 2006, Laronde testified in a federal court hearing that he had been accused of planting evidence and had, at that time, pending complaints of use of excessive force. The outcome of the complaints is not known.

In July 2009, a man claimed he was strip-searched by Laronde at a shopping center parking lot and released without any charges. A lawsuit the man filed was dismissed because of confusion over the incident’s date.

In June 2011, a man claimed Laronde stole $770 from him after an arrest for marijuana possession, a charge that was later dismissed. The case settled out of court for an unknown amount.

In April 2012, the city paid a man and woman $155,000 to settle their lawsuit against Laronde and two other officers. The man claimed he was strip-searched. Both claimed they were assaulted on the street.

Most recently, the city paid $20,000 to a man who claimed Laronde and another officer unlawfully detained him inside the Baltimore City Circuit Court. The man was employee of the court clerk.

Not surprisingly, the BPD is refusing to release details about the 7-11 incident except to say that they are not conducting a criminal investigation into his actions. Based on their past history of “investigating” Laronde, I wouldn’t hold my breath expecting results from this latest internal investigation, either.