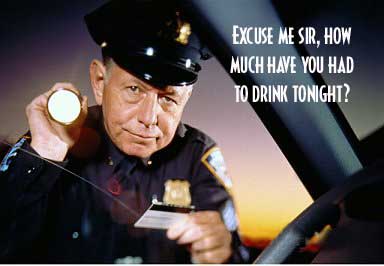 The story below was sent to CopBlock.org via the submission tab from a person who wishes to remain anoynoymous – due to pending court case.

In January of 2015, at around 1:00 A.M., my girlfriend and I were at a bar in East Helena, MT. At around 1:20 A.M. we noticed a Montana Highway Patrol vehicle parked on the opposite (South) side of West Main Street to the West of the establishment with its parking lights on. At around 1:45 A.M., when the bar was closing, we walked across the street to the parking lot where my vehicle was parked, got in the car, and pulled out of the lot heading East on West Main street. Within roughly 15-20 seconds of pulling out of the parking lot I saw in my rear view mirror the MHP patrol car’s headlights turn on as it pulled on to the street behind me. With the officer in tow between 1 to 1.5 blocks behind me I drove East approximately a quarter mile, turned South on South Montana Avenue, then turned West on E US Highway 12. When I was turning onto the Highway the patrol car had just turned the corner from West Main to South Montana.

I continued West on Highway 12 and saw that the patrol car had also turned the same direction and was still driving behind me (at a fair distance as I had been driving 45 mph when I got on the Highway while he had 3 blocks to cover on South Montana with a 25 mph speed limit before getting to the Highway). By the time I traveled about a mile and a half on the Highway the Trooper had caught up with me and was actually in the passing lane starting to pass me when I braked and signaled a right turn, at which time he also braked, turned on his lights, and pulled me over.

Trooper Uhl informed me that he had stopped me because I was “swerving inside my lane” and that my tags were expired (which was true). Ultimately I was arrested and charged with DUI (I do have some issues with the conditions during the FSTs but that’s another story). A couple weeks after I plead not guilty I received my copies of the police report and dash cam video. The first sentence of Trooper Uhl’s report read “I was patrolling along Highway 12 when I noticed a white thunderbird swerving within its lane…”

In short: An MHP Trooper sat outside a bar on a city street (pretty unusual for a Highway Patrolman to be doing in Montana), followed me at a distance through town to the Highway, drove fast enough to close a very large gap (I was driving the speed limit) within a mile and a half to catch me, pulled me over citing he noticed me because I was swerving (which, were he just driving along behind me observing the speed limit, he’d never have been close enough to see any swerving I might have been doing seeing how I wasn’t impaired and was not swerving any more than the average person normally swerves). In the end, he lied in his report about the events leading up to the stop.

I am still awaiting trial on this.

– Catch of the Day

What’s the point of posting this submission? To give another ‘criminal’ a voice to spin their wrong choices on and to blame cops for doing their jobs? I guess that’s one way you can see this post. It also highlights a police state right? Without the police state you wouldn’t have cops camping outside of local bars, scanning plates for registration (aka: PAPERS PLEASE!) or claims of swerving to justify having a man with a gun pulling you over under the guise of safety.

While CopSuckers will praise the actions of the LEO here, I find myself asking, “if the Trooper was going to sit outside the bar all night (or even just near closing) then why didn’t he just offer those who walked out at bar time a ride home?” Or follow them to make sure they made it safe. Clearly “Catch of the Day” wasn’t driving too bad since he wasn’t immediately pulled over nor did he crash. Maybe the Trooper wanted him to crash so he could shoot him like this California cop? Of course the Trooper said the vehicle was swerving but who wouldn’t be when there’s a man with a gun and a desire to cage people who’ve had some drinks then drive behind you?

Nevertheless the main reason I’ve decided to post this is so that people can learn. Know that police partake in stalking/fishing schemes like this one. They stake out local watering holes and find any reason to stop vehicles leaving such places. While it’s not exactly right (IMO) your DUI will hold up in court – unless some other reason gets you out of it – so choose an alternative to avoid falling into these revenue generation traps (Uber or Lyft?). Or send out a decoy.