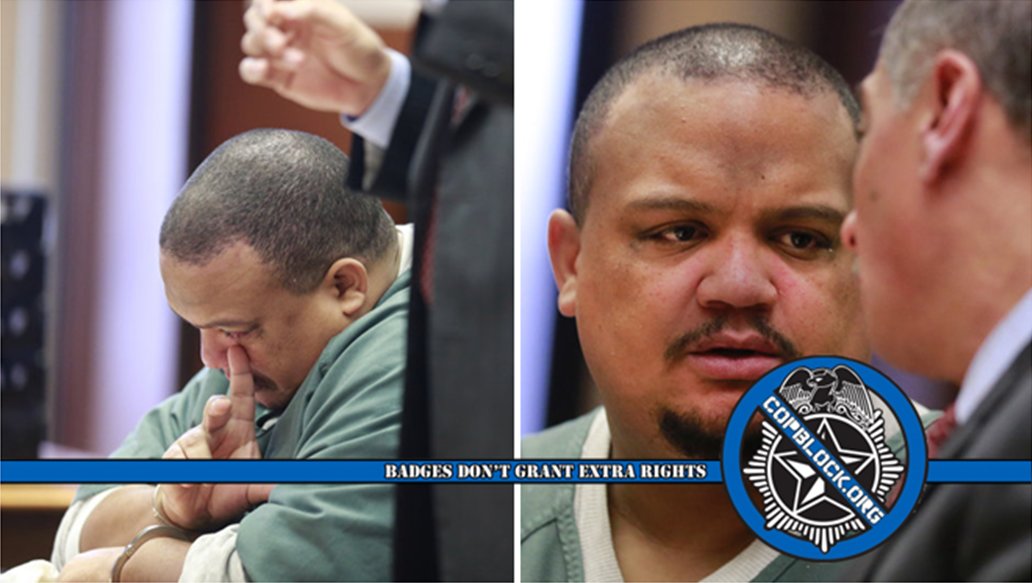 In November, two Bloomfield, New Jersey police officers were convicted on numerous charges after suppressed dash-cam footage showed them beating a man who was facing years in prison because of their lies.

The video, which did not emerge until 30-year-old Marcus Jeter was already on trial in February of last year, ultimately prevented him from serving years in prison for a multitude of counts, including eluding police and assault.

The incident occurred in June, 2012 when police were called to the Bloomfield home Jeter shares with his girlfriend. No charges were filed and Jeter said he left after briefly talking to the officers.

Moments later, police, who said Jeter was eluding arrest, pulled him over on the Garden State Parkway and drew their weapons. Officer Sean Courter can be seen on the dashcam footage pointing a pistol at Jeter through the drivers side window while another officer, Albert Sutterlin, who is armed with a shotgun, stands by.

The footage then shows a police car, driven by officer Orlando Trinidad, come careening from the opposite direction over the median into oncoming traffic, before striking Jeter’s parked car. (This was not mentioned in any police report.)

Officer Courter then breaks the driver side window, opens the door, and begins punching Jeter in the face.

“The next thing I know, one of the [officers] bust the door and there is glass all over my face,” Jeter said. “As soon as they opened the door, one officer reached in and punched me in my face.”

Courter continues to punch and elbow Jeter while screaming “stop resisting” and “stop going for my gun” while the victim is clearly holding his hands in the air. “All I kept saying is I’m not doing anything,” Jeter said.

It is at this point that Jeter is dragged out of his car, thrown on the ground, punched further, handcuffed, punched one more time for good measure, and then placed in a squad car.

It is worth noting that the Bloomfield Police Department’s internal investigations department found no evidence of any wrongdoing by the officers in their initial “report,” and during Jeter’s criminal proceedings, attorneys for the cops argued that their clients had acted appropriately.

After prosecutors reviewed the dash-cam video however, all charges against Jeter were dropped, and Courter and Trinidad were indicted on charges of official misconduct, conspiracy, tampering with records, and false swearing. Trinidad was also facing an aggravated assault charge.

Jeter had initially been offered a plea deal to serve five years in prison, which he refused, and testified in court that he had his “hands up” the whole time during the incident. He also maintained that he never tried to disarm Courter and did not strike Trinidad like the officers had claimed – facts confirmed by the dash-cam video.

In November, despite officer attempts to derail the case against them, an Essex County jury convicted Courter and Trinidad of official misconduct for making the false statements in police reports – and additionally found the cops guilty of conspiracy to commit official misconduct, tampering with public records, falsifying or tampering with records, and false swearing.

They dropped the aggravated assault charge against Trinidad but convicted him for the lesser crime of simple assault for striking Jeter during the incident. The cops were suspended without pay from their positions for more than two years and were scheduled to be sentenced on Jan. 11.

The sentencing for the officers would be postponed however, but on Friday, Trinidad learned that he would be spending at least the next five years of his life in prison.

During the sentencing, Essex County Assistant Prosecutor Berta Rodriguez cited the “needless physical and psychological injury” caused to Jeter and called on Superior Court Judge Michael L. Ravin to impose a seven-year prison sentence with a five-year period of parole ineligiblity. This means Trinidad will not be getting out early.

Rodriguez said that by striking Jeter during the false arrest and then falsifying the police reports, the officer’s actions “show[ed] a complete lack of respect for Marcus Jeter and the citizens of Bloomfield and Essex County, and a lack of respect for his position as a law enforcement officer.”

“I am truly sorry for everything that has transpired,” a chained and cuffed Trinidad said while crying like a child after being sentenced. “I am a different man today as I stand here before you. I am a humbled man.”

Officer Courter’s sentencing was postponed again in the case, but officer Albert Sutterlin – who retired in the wake of the incident – pleaded guilty in October 2013 to falsifying or tampering with records. After testifying against the other officers, he took a plea agreement and was sentenced to two years of probation in late November.

Jeter was unarmed, committed no crime, and presented no threat or danger to the defendants or public, the lawsuit says – and names in addition to the Township at large – a total of 10 officers, including Sutterlin, Trinadad, and Courter.

In September 2014, Bloomfield officials transferred the suit to federal court where it continues to sit unresolved. Jeter is seeking compensatory and punitive damages, cost and interest, attorneys’ fees, pre-judgment and post-judgment interest against all defendants and any other relief that the court deems justifiable.

“I feared for my life that night,” Jeter said at Friday’s sentencing. “It’s a situation that I would never want anybody to be in, and I believe that I didn’t do anything to provoke the officers that night.”