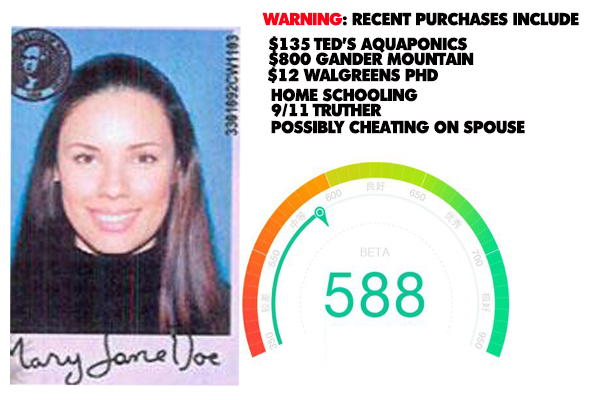 Are Citizen Rankings A Violation Of Our Constitutional Rights?

It’s no secret that the United States government is collaborating with businesses to collect meta data on its citizens. In a recent article it was proclaimed that Fresno law enforcement was using technology that gathered information from “arrest reports, property records, commercial databases, deep Web searches” and “social- media postings” to assess a citizen threat score according to the Washington Post.

Eventually we may see citizen rankings become more prominent and even dictate if you can fly,  leave the country, access government buildings, shoot a smart gun, receive a job, health care coverage you will receive, enter a self driving car and even what school your children may attend.

Socially, the speculative reality is that a citizen score would gather data from social media sites such as Facebook, Reddit, Twitter, Snapchat and Instagram. Facebook, which reads like a public diary, already records your conversations and reports controversial activity to local police. The system would undoubtedly calculate a score based on your friends, political postings, arguments and relationships. If you recently had conversations about suicide or owning fire arms expect your threat rating to increase. Dating sites are no exception to meta data collection. Websites such as OK Cupid ask a plethora of bizarre questions ranging from fringe political ideology, drug usage and relationship questions. Tinder is also starting to rank their clients using their system to calculate your attractiveness or charm factor.

Your school records will be accessible to the cause. Under the governments new Common Core curriculum all sorts of meta data is collected on your children and will eventually be used to asses their healthcare, thought process,  threat ranking, sociability and potential to contribute to society.  This ranking could be used by a judge to dictate what kind of sentence your child should receive for a crime or by a college to be the deciding factor if your child is admitted to the school for education.

Credit card purchases on-line and off-line will play a huge factor in calculating your score . Your purchase history tells the government, law enforcement and anyone who has access to this data your state of health, what weapons you own, places you like to frequent, your religious beliefs and your current traveling trends. Moral of the story is, use cash as much as possible and learn to keep it out of the bank.

Your internet search history is not hands off. Your search history  may reveal the most personal and intimate details of your private day to day routines, including your interests, shopping trends, political affiliation and thought process.

Vehicles will also help contribute to the meta data collection to figure out if you’re a 5 star citizen. All new cars have black boxes now that will connect to built in wi-fi systems that all roads, lights and cars will share and communicate with in the near future to make way for driverless cars. A citizen ranking would make it easy for a driverless car to dictate who will have to die in an automobile accident due to weather conditions or vehicle malfunction. It has already been announced that self driving cars will decide whether you die or not. Children would naturally receive a higher ranking as well as government officials and law enforcement.

These rankings are needed for artificial intelligence to properly identify and interact with humans.

Who would of thought that the Patriot Act would lead to all of this?