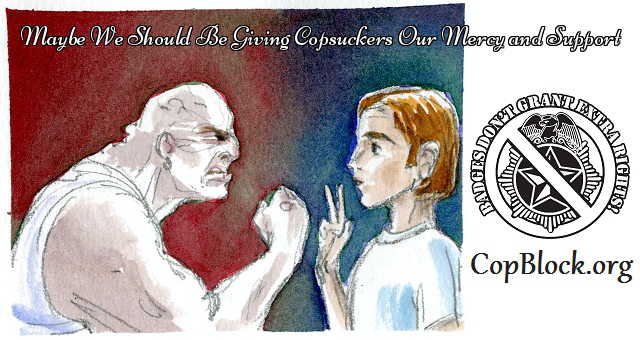 The most memorable moment of the first episode of The Walking Dead is when Rick Grimes re-encounters the pathetic half zombie at the end of the show. Even though that zombie would like nothing more than to eat his flesh and turn him into one of it’s kind, Rick is able to understand that the zombie was acting on forces that were beyond individual human will. So just before he puts the rabid monster out of its misery he tells it, “I am sorry this happened to you.”

Nobody ever said- “I want to live in fear and be dependent on other adults when I grow up.” Nobody ever intends to become subjected to the conditioning and manufactured fears that our institutions put us through for its own maligned purposes. The institutions that have done this to rabid police supporters have also been trying to do the same to us. Whether it never took or circumstances forced us to abandon that conditioning, those of us who see the problems of authoritarianism are lucky, in that we can at least still conceive of the freedoms we have lost. Those lost to the system have been robbed of even the basic ability to imagine a better existence for themselves. And that is itself a tragedy. Copsuckers are also victims of the system. Perhaps it is time we change tactics with them and show them our support and mercy, just as we would do for a loved one we were trying to rescue from a suicide cult that they have become brainwashed to identify with beyond the reach of logic and facts. What I am getting at is that copsuckers would not be that way if they were not also victims. They deserve the understanding that we should afford to all victims of police and the state. The fact that they do not want our help is not because they are our enemies. It is because, like any dependent or addict, they are trapped in a cycle of self-abuse so deep that they can no longer imagine how fulfilling and joyous life could be without their destructive copsuck substances. And they will lash out at all who threaten to take it away from them or judge them for it. So maybe we should start treating them with the mercy and support we would give to any person in a desperate situation that needs our help.

That being said, obviously most people are not going to do this. Antagonistic methods are useful in the words of the skilled meta-informationist. And they are certainly gratifying. Sometimes they are the only gratification we get out of the horrible situation we are in. So I can understand why some people will always, or will most of the time, choose to meet the copsuckers where they play- on the battleground. Some of you reading this, however, may find that type of behavior unsettling. You may wish to contribute to the discussion, but do not want to get into comment fights. For those want a more peaceful and loving way of dealing with rabid police supporters that does not include burying them with facts or logic, perhaps you can begin employing the tactics I will discuss below. Maybe it will be your efforts that finally make the difference. I have always stood by the idea that we must try every method possible in freeing ourselves from the police state, and so I hope that some folks step up to try this new method.

First of all, we have some ugliness of our own to clean up. The comments sections at CopBlock.org as well as on our Facebook page tend to attract some fanatic and suggestively violent people who actually do hate cops. And even though I suspect many of these are just cops or their supporters planting the hate to discredit us, we can discredit them just as easily. So from now on whenever you see something like…

“All pigs must die!”

“This person does not represent me or the majority of the people here. They have been emotionally disturbed by a lifetime of systematic oppression, so please ignore their ignorance and hatred; and shower them with the mercy and support they need to get right with themselves and the world again.”

Now as far as the copsuckers themselves go, any challenge you make is going to put them in combat mode. So if you wish to get them to truly listen, do not challenge them in any way. They are already going to find your attempts to show them mercy and support to be condescending and patronizing from their worldview. Do not argue back. Make your statement and then move on to the next copsucker in need of your help. There are always plenty. Below I will write out a response that should be pretty universal. You may outright use it, cannibalize it for parts, personalize it, use it for inspiration or outright ignore it altogether. It is an example, not a script, unless that is how you wish to use it.

“Dear Brother/Sister in humanity,
I can see by your words that you are in pain. Like all of us here, you have been crushed by a lifetime of oppressive forces. All of us are affected differently by this. Some of us fight with every breath against it, while some of us live in so much fear of it that we come to identify ourselves through it in order to avoid succumbing to the existential dread and helplessness it entails to recognize it in all of its horror. I understand your predicament. I fight the police state not just on behalf of its obvious victims, but on behalf of all of those whose entire being has been influenced by its power. So even though you cannot see that we are trying to free you along with ourselves, we will continue to fight for you. We will show you our understanding in falling victim to complex forces that caused you to become dependent and attached to your abusers. You are not to blame. We are here to help. May you yet come to experience freedom in your lifetime, whether you develop a taste for it before those of us fighting for it are successful, or not. Do not fear us. Do not live in fear. Face it and fight it, and if at the end of each day you were not victorious, wake up strong and start again. We are on your side. We are all in this together. Stay well, my friend.”

No single instance of this response is going to change somebody’s mind or open up their eyes. But perhaps over time, through repetition and combined with the methods others are using to break through those walls, it will have an impact.

READ- IT’S THE LITTLE THINGS to find out more about how copsuckers are also victims of police and the state.