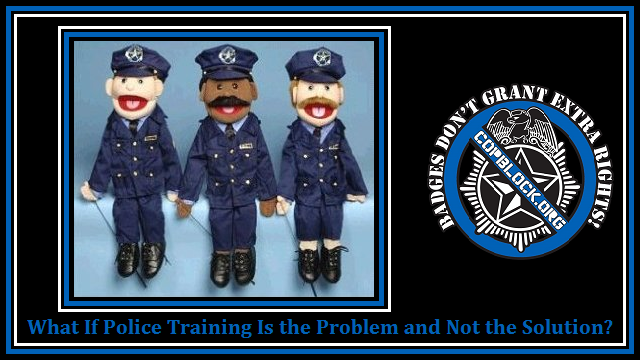 Both police supporters and critics of the accountability persuasion are always certain that what police need is more training. Yet when someone ends up dead at the hands of police it is the supporters who are quick to excuse the killing by saying that the cop was just doing what they were trained to do. Which is another reason I think that accountability advocates should rethink their own reasoning, since it often parallels with rabid police supporters in ways that validate their conclusions.

Watching a few videos of police pulverizing people and pets today, I had an unsettling glimpse into their worldview. When the magic costumes and badges come out, individual human beings with decency and compassion lose themselves in a role. They become the part they are playing. Not just for themselves, but for their supporters as well. And as if it is not bad enough that the individual wearing those magical implements is lost to the character they are playing, training often removes them even further from their humanity.

Training is conditioning. It is conditioning a set of responses based on specific observations. The conditioned officer no longer sees a scared dog or human in distress, they see a problem which they have specific methods of handling. And when those specific methods end up in police committing acts of violence, the human being takes no responsible for a human tragedy, but rather passes the problem onto the character who was just complying with their training. And so training becomes a method not only by which people are taught to kill, but by which they later justify it and refuse to take responsibility for the inhumanity of their acts.

The reason soldiers are given regimented training, without going into the problems of the industrial military complex, is so that they will have conditioned responses to dangerous enemy combatants and are more suggestible to following orders no matter what. The increasing training given to police similarly causes them to see the public as dangerous enemy combatants. While they are playing their role as robotic enforcers, they see us belonging to another category of beings. The Us-vs-Them mentality becomes the dominant cultural paradigm and the thin blue line becomes a demarcation of group supremacy in which police see themselves as superior.

Yet their supporters often join them in their assessment. Where I saw videos in which robots who had been programmed to be violent thugs by their training and culture hurting living things, police supporters saw the same video and saw ‘the pros’ dealing with a ‘situation’ and just doing their jobs. Society itself conditions people towards authoritarian empathy. In this way, individuals are already ‘trained’ by their environment before ever putting on a badge. And when we add all of the ‘if this happens, you get to kill them and get away with it’ training, we create robots who no longer act as human beings.

However, every situation police respond to is, in some way or another, a human situation. The last thing we need are for the people who are responding to difficult human situations to be people who have been conditioned through their training to put their humanity aside and think only within the narrow confines of the role they have been assigned using only the pre-ordained responses absorbed through training. Difficult human situations require a response by people thinking like a person, not a mystical authority figure thinking like a mystical authority figure. The training we are giving cops as a society and professionally has created a machine which chews up human beings and spits them back out either broken or dead.

Before you start with the, “But Joshua, it is not the training but the kind of training that is the problem.” let me just forewarn your naive literalism. All training conditions the individual and the conditioning dehumanizes them. When you tell people what they should and can do, you take from them the responsibility of considering for themselves what the right thing to do it. And absent this responsibility for ones own actions, individuals become capable of acts they would otherwise never consider.

The logical conclusions of accountability advocates always fail to consider the actual consequences of their rhetoric. Instead they are attached to an idealized symbol their words have conjured up. Much like Bernie Sanders supporters, minimum wage increase advocates and gun control supporters, the idea that police could attain some ideal state of operations with allegiances more to humanity than to police and the state themselves, police supporters and accountability advocates are living in a fairy tale where they get to have their cake, eat it, lose five pounds and then have some more cake.