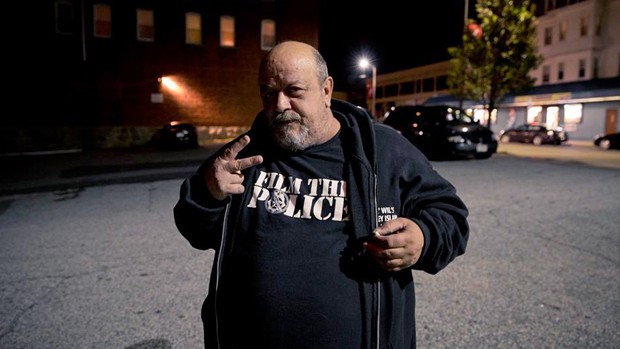 **Originally posted at Photography is NOT a Crime by Carlos Miller.**

A Massachusetts man who was arrested on wiretapping charges for video recording a cop in front of his home yelling profanities into a phone was awarded a $72,500 settlement Monday.

George Thompson, a lifelong cook, said he is investing the money into a food truck named Bozo’s – in honor of the cop who arrested him – Fall River police officer Thomas Barboza.

Barboza, who received a one-day suspension for the profanities, is more than welcome to dine at Bozo’s after it opens this summer, Thompson said in an interview with Photography is Not a Crime Monday evening.

“The first meal is on me,” said Thompson.

A generous offer considering Barboza is more than likely responsible for deleting the footage from Thompson’s iPhone after he seized it as “evidence” – not that he was ever charged with destruction of evidence.

But Barboza is unlikely to go near the food truck as he has been trying hard to avoid Thompson since he made the arrest on January 6, 2014, refusing to make eye contact with the 53-year-old man when the two run into each other at the local Dunkin Donuts near the Fall River courthouse on those days when he had hearings.

“He runs away,” Thompson said.

Thompson, it turned out, became his worst nightmare, hanging up a sign in front of his home that read, “bad cop, no donut #32,” on the day of his release from jail, keeping it there for more than a year – ignoring a request from a city councilwoman to remove it – taking it down only because he moved after his landlord decided to sell the place.

The 32 is Barboza’s badge number, a low number indicating he is an old-timer at the department. A man who has learned he can do what he wants, when he wants, all because he carries a badge.

But he finally met his match with Thompson, who said  he will net $47,000 after the lawyers take their cut, a nice sum to launch his food truck business.

On the day of his arrest in early January 2014, Thompson said that he was sitting on his front porch, noticing Barboza pacing back and forth speaking into his phone for almost an hour, saying “fuck” in almost every sentence.

After watching an elderly woman walking by who seemed offended by his words, Thompson told the cop to watch his language.

But Barboza told him to “shut the fuck up and mind your own business.”

That is when he pulled out his phone to record, which prompted Barboza to rush onto the property to arrest him.

“That’s right, I’m videotaping you,” Thompson told Barboza, according to the officer’s own arrest report, which also confirmed that Barboza was working off-duty security for a nearby construction company.

He then followed up that statement by writing that he noticed Thompson was holding the “phone to his chest area in a hiding motion.”

That last detail was crucial for Barboza to include in his report because Massachusetts wiretapping laws state that it is illegal to secretly record a person without their consent, even if that person has no expectation of privacy.

And what the hell is a “hiding motion” anyway?

What happened was that Barboza noticed he was being recorded but did not appreciate being recorded, so he accused Thompson of secretly recording him. Cop logic. Twisting the truth without caring about the obviousness of it, knowing that cops investigate themselves.

Thompson said Barboza called him a “welfare bum” while arresting him, an accusation Barboza denied to internal affairs.

But even in his report, he managed to fuck himself harder than he fucked Thompson.

The whole thing sounds absurd if you’re not accustomed to hearing police lies, but it’s all there on paper in 72 pages of discovery, which you can read here.

And it gets even more absurd.

At some point while the iPhone was in police custody, the phone was reset to default factory settings, a development that police tried to blame on Thompson, saying he did so remotely.

It wasn’t like Thompson was able to delete all the files as Barboza was pouncing on him to shove him in the back of a police car.

Fall Rivers police returned his phone on May 28, 2014 and internal affairs eventually determined there was no “malicious intent” behind the arrest or the deletion of the footage, concluding that the footage was “inadvertently” deleted because the cops kept trying to enter the pass-coded phone but failing.

No, you really can’t make this stuff up. It’s all there in the discovery in reports signed by Lieutenant Ronald Furtado.

The 72-page report states that Thompson eventually gave them the passcode to his phone, which I have yet to confirm with him as he is now sleeping, but that passcode was given to them on January 15, 2014, nine days after his arrest and seven days after the phone had already been wiped clean of all files and restored to factory settings.

The wiretapping charges against Thompson were dismissed in April 2014 but his phone was not returned to him until the following month because they insisted upon a court order, according to the Bay State Examiner, who tried to interview Barboza, only for him to hop in his car and drive away.

Yet the Fall River Police Department never sough a court order to view the contents of Thompson’s phone.

Thompson filed his lawsuit in December 2014,  which you can read here.

That was when he was told they would settle with him in 2016 because they did not want the settlement to influence the upcoming November 2015 election of Mayor Sam Sutter, who happened to be the district attorney trying to prosecute him for the wiretapping charges only a year earlier.

Sutter lost the election anyway to a 24-year-old man named Jasiel Correia, who took office two weeks ago. He is Fall River’s third mayor in 13 months.

Sutter had only taken the mayoral reigns a year ago after resigning as Bristol County District Attorney when the previous mayor, Will Flanagan, was defeated in a recall election.

It’s a clusterfuck of a city and Thompson said he is not going to stop his rabble-rousing.  He still wants to hold Barboza and the police department accountable for deleting his footage, so he plans on attending the next city council meeting and hand out copies of the 72 pages of discovery.

Besides the one-day suspension for cursing, Barboza was forbidden from working off-duty security detail for 15 days.

The real crime besides the unlawful arrest is the illegal destruction of evidence. Barboza may never be disciplined for that, but he will also never live that one down.

Especially when the clients start lining up at Bozo’s, which they will judging by customer reviews of the restaurant where he currently works.