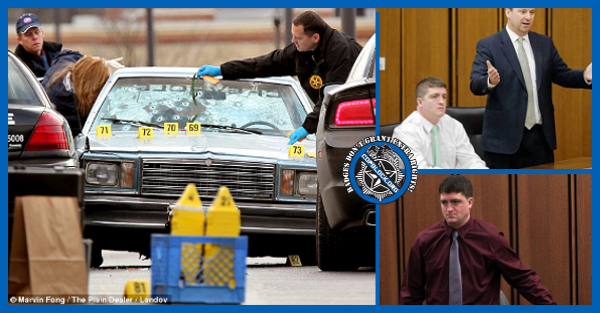 It seems like the trial of Cleveland police officer, Michael Brelo, just ended yesterday for those of us here in Cleveland. Yet we knew the trial was not the last we are going to hear about this killer cop. Today, he and 5 others were fired for policy violations that stemmed from the incident where 13 Cleveland police officers fired 137 bullets into a car killing two unarmed suspects.

Timothy Russell and Mallissa Williams were killed after their car backfired in front of the justice center in 2012. One of Cleveland’s finest mistook the backfire for a gunshot, and chased the car to search them. They ran and subsequently some 90 cop cars joined the chase that ended with Timothy and Malissa dead in the parking lot of an elementary school on Cleveland’s East side.

Officer Brelo jumped on the hood of their car as they tried to surrender and emptied at least two clips into the unarmed duo. The city of Cleveland handed down 63 suspensions, disciplined 7 supervisors and fired two others, all the while claiming they did nothing wrong. The city then compensated the families of the deceased to the tune of 3 million dollars in a civil suit filed by the families of Timothy and Malissa.

Brelo was later tried as the lone killer and acquitted. Our beloved prosecutor, Timothy McGinty, claimed he ran into a blue wall of silence when trying Brelo. As a result the court could not find sufficient evidence that Brelo’s bullets killed the pair, despite it being rumored that Brelo carved his badge number into his bullets. Now he is on the loose and free to join another police department. To wrap all this up, the city of Cleveland that claims they did nothing wrong the whole time, has added 6 more officers to the list of those that did nothing wrong that fateful day. That brings the total to 76 officers that weere disciplined despite having done nothing wrong. Make sure you study this guys face and if he appears as a cop in Indiana or California, let’s make sure his bosses know what kind of cop he is. A killer cop!