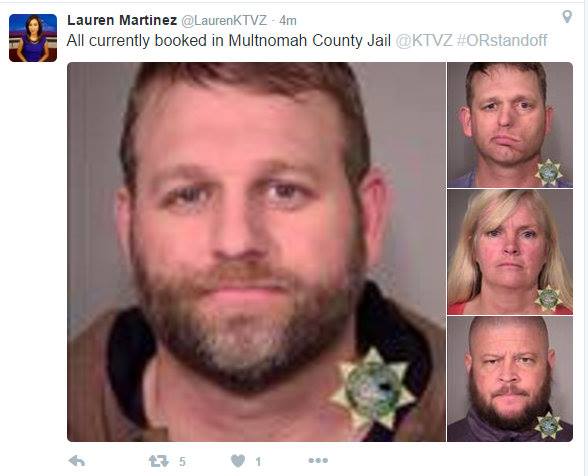 A car carrying Ammon Bundy and several others was stopped by Oregon State Police and FBI members. The initial reports state that two men were shot and one has died as a result of the gunshot. According to KATU 2:

It all began with a traffic stop while Bundy and some of his followers were en route to a community meeting at a John Day senior center, about 70 miles north of Burns.

Shots were fired after FBI agents, Oregon State troopers and other law enforcement agencies made the stop on US Highway 395.

All of them are facing federal felony charges of conspiracy to impede officers of the United States from discharging their official duties, through the use of force, intimidation or threats.

LaVoy Finicum, an outspoken member of the armed group who would often speak at news conferences in place of Bundy, was shot and killed during the confrontation. Ryan Bundy suffered a non-life threatening injury in the shooting.

News (if no video below, click here –>) report from the local news agency:

The reports coming out of Oregon also state that those remaining at the Wildlife Center have been told by the FBI that if they leave they will not face arrest or aggression. At this time it is unclear if those there will stand their ground or leave.

Yet, while the final stages of this occupation play out, we have a moment to peep into federal law enforcement mentality. Those arrested face charges of impeding officers of the USSA from discharging their official duties through the use of force, intimidation or threats.

Let me say that again. IMPEDING OFFICERS OF THE USSA FROM DISCHARGING THEIR OFFICIAL DUTIES THROUGH THE USE OF FORCE, INTIMIDATION OR THREATS.

That’s what those who were arrested are facing charges of. Yet, does it not describe what the United States Government does on a daily basis? The government tries to impede on each person’s everyday life (or duties) and does so via the use of force, intimidation and threats!

In the past I’ve recorded police officers parking illegally to highlight the double standard of law enforcement, today the FBI just gave the world another – more troubling – example. While the FBI claims that the militia members have used force and intimidation it’s the sole purpose of how any Law Enforcement Agency achieves anything.

Threats and force seemed to be exactly what was used when arresting the people who’ve yet to harm anyone, as detailed in this first person account of the arrest.

This account clearly contradicts the claims by the FBI and State Troopers. Claiming only three shots were fired and that Bundy and Finicum were not cooperating.

Get live updates from those in Oregon via Citizens for Constitutional Freedom Support Group on Facebook. Will update at more details come in.