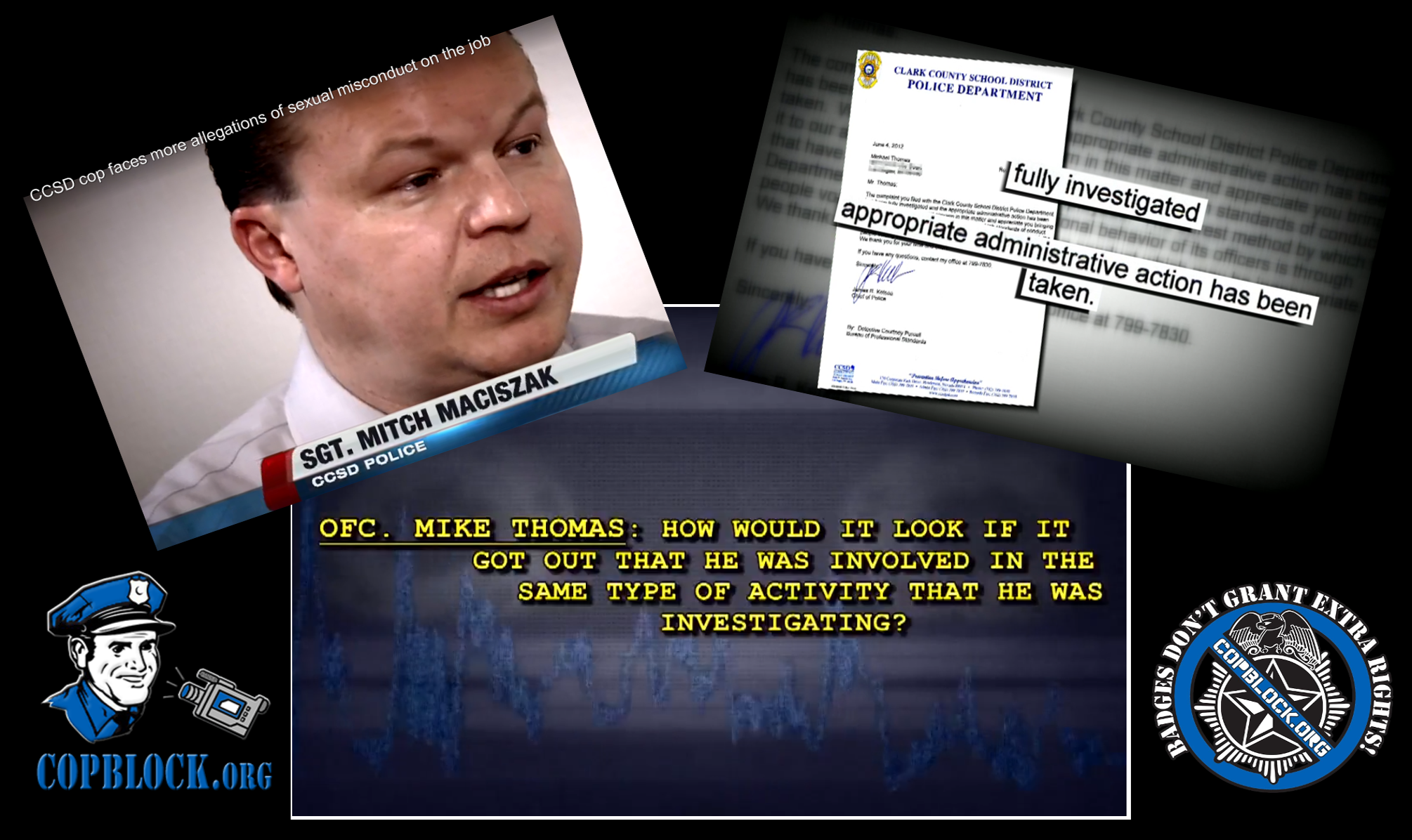 Up to that point, Maciszak is pretty relaxed and happy to discuss how inappropriate the janitor’s behavior was. That changes quite a bit shortly after, though, when Spears begins to discuss Maciszak’s own behavior. Suddenly, he doesn’t want to discuss it because it’s a “personnel issue.” Shortly after, Captain Ken Young, who was monitoring the interview, agreed that it’s a personnel issue and declared the interview over as Maciszak stands up and starts taking his microphone off.

So, it’s okay to discuss a school janitor’s dirty hands, even though it’s not just a personnel issue but also a criminal matter. However, the interview is over as soon as someone brings up the fact that the cop in charge of investigating that case has left some stains of his own on school property.

Darcy Spears: The ultimate goal in cases like this is what?

Sgt. Maciszak: Well, we always like — like to see some type of outcome to where some type of sentence is imposed.  Either jail time — always jail time.

Skelton cut a plea deal, putting him behind bars for two years.  Then, he’ll have to register as a sex offender.

Sgt. Maciszak: Absolutely.  We take all incidents seriously.  Any type of incident that could impact our children, our staff, our visitors of the school district, we want to make sure–like I said–they’re safe when they come to our property.

Though Maciszak says the Skelton case is unique, our research suggests that this might not be an isolated incident.

We asked Maciszak to flash back to when he was a detective stationed at Garside Middle School.

Sgt. Maciszak: You’re speaking of a personnel issue and I’m not comfortable speaking with that.

It’s something the CCSD Police Department has kept secret… Until now.

Darcy Spears spoke to Officer Sturdivant, who recounted what he saw that day.

He said he tried to use his key to get into the police office at Garside, but the chain lock on the inside blocked him from opening the door all the way.

He saw Maciszak jump back, bend over to cover himself and run into the back office.

Maciszak’s belt was lying on the desk and there was Asian pornography on the computer screen.

Officer Mike Thomas on the audio tape says, “The tech over at Garside had constantly–it was kind of like common knowledge — had constantly — that computer was always crashed.  It had so much pornography on it that they had to constantly go in there and fix the problem.

When we asked the District about the incident, they sent a written statement, which says, “Concerns were brought forward, which were investigated administratively. Appropriate action was taken.”

Because no one blew the whistle on Mitch Maciszak, his case wasn’t even investigated for years.

That investigation started on the very day Maciszak was promoted to sergeant.

The outcome, our sources say?  A letter of reprimand in a personnel file.

“As far as I know, this was a reprimand in the file and no criminal charges were filed?” Darcy Spears asked Sgt. Maciszak.  But before he could answer, CCSD Police Captain Ken Young, who was supervising the interview, said, “At this point, like I said, we talked about that, this is a personnel issue.  So at this point we would have to conclude the interview.”

Maciszak takes off his microphone, and leaves the room.

Contact 13 learned this was just the tip of the iceberg with Sgt. Maciszak. And it gets better.

The third video embedded below details even more of Sgt. Maciszak’s “personnel issues:”

But Contact 13 discovered the cop who headed up the investigation had a dark secret of his own.

“How would it look it if got out that he was involved in the same type of activity that he was investigating?” CCSD Police Officer Mike Thomas asked during a March, 2012 Internal Affairs investigation.  Contact 13 obtained the audio recording of that interview…

Darcy Spears: Is it fair for you, with a background like that, to be investigating a case like this? Do you see a possible conflict of interest?

Sgt. Mitch Maciszak: There is no conflict of interest.

Maciszak is no stranger to allegations of sex acts on the job.  What is strange for him is having to answer publicly for his actions…

Other officers were not comfortable speaking out about Maciszak’s behavior until sources say it became impossible to ignore.  They came to Officer Mike Thomas, who heads the police union’s grievance committee.

“Taken as a whole, I think there’s a pattern that did give me some concern,” Thomas told Internal Affairs.

Specifically, sex on the job at school police headquarters.  Investigators were told Maciszak was getting oral sex from another department employee in his assigned school district vehicle.

“And on at least one occasion, he allegedly took her into his work office and had sex with her,” the Internal Affairs investigator repeats during the interview with Thomas.

Thomas added, “I think if you have impulses that you can’t keep in check and you bring them into the workplace, then I think that’s an issue.”

The other issue Internal Affairs investigated is something Officer Thomas witnessed first hand on December 18, 2010 at the Police Officer’s Association Christmas party, which was attended by about 125 department employees and their guests.

IA investigator: And that you saw Det. Maciszak, who you felt was obviously intoxicated, taking his camera phone, sticking it up women’s skirts and taking pictures up their skirts?

Multiple people who were at the party tell Contact 13 they saw it too.

Officer Thomas told investigators, “To say he was out of control was an understatement.”

The behavior described is a clear violation of the School Police code of conduct.  Sanctions are supposed to get stricter with each additional offense.

According to an internal memo Contact 13 obtained, the complaints against Maciszak were “fully investigated and the appropriate administrative action” was taken.

We don’t know what that action was, but we do know Maciszak was promoted to sergeant during the investigation and even acts as a department spokesman, including in the case of custodian Michael Skelton.

When we asked him about Skelton, he said, “This employee chose, consciously, to do the wrong thing and make the wrong decision.  Therefore, he has to face the consequences that have been dealt to him.”

So, after a school janitor “chose, consciously, to do the wrong thing and make the wrong decision,” he had to “face the consequences” of a felony record, prison time, and being forced to register as a sexual offender for the rest of his life. Meanwhile, the cop investigating Skelton has a history of sexual crimes longer and even worse than him. However, instead of having to face the consequences of his actions, Sgt. Maciszak’s conscious and chosen wrong decisions are treated as a personnel issue and swept under the rug without any meaningful consequences, whatsoever. In fact, according to the CCSD Police Department, the “appropriate administrative action” was for him to be promoted and made a spokesperson for the department, not to be criminally charged or even fired.

This is hardly the first recent case of a CCSD cop getting arrested or of sex crimes being committed by members of the Las Vegas Metropolitan Police Department. Nor is it even a rare example of Las Vegas police covering up for their fellow employees or other government officials. It’s hardly shocking that people living in Las Vegas have such little trust of the police or faith in police “investigators” with that type of sterling history for accountability among area police departments.