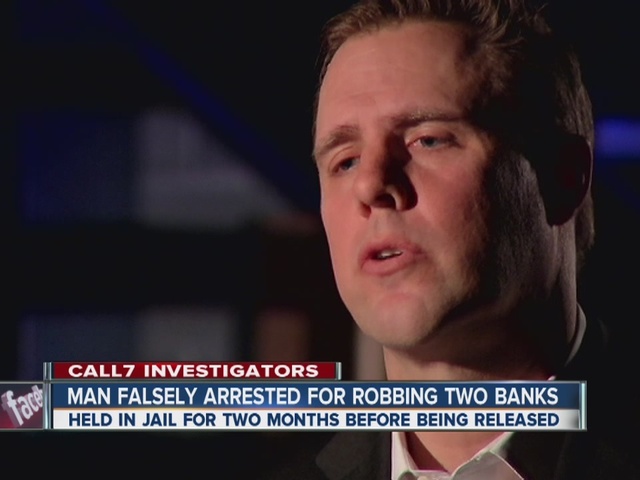 UPDATE March 27th, 4:30 pm: Steven Talley was back in court on March 17th hoping that the state would drop the wrongful charge of bank robbery against him. As the regular readers here will recall Talley was arrested, and beaten during the arrest, for allegedly robbing two banks in Denver. He was at work during the first robbery and that alibi is airtight.

The second robbery was dropped with the first but was pushed again after Talley had a disagreement with the Internal Investigation into those who beat him. At that time an FBI report came to light that stated facial recognition software identified Talley as the suspect. Yet, Talley has a distinctive mole on his face that the robber does not. Add that to the fact that the bank teller also testified that Talley is not the suspect.

Nevertheless Talley was in court and to his surprise the charges weren’t dropped and instead the ‘court’ asked to have his height measured. According to Fox 31:

But the suspect in the video doesn’t appear to have a mole on his right cheek like Talley does and even the bank teller, Bonita Shipp, has testified that Talley is the wrong guy.

Now FOX31 Denver has obtained an FBI document from the Digital Evidence Laboratory in Quantico, Va., that makes a height determination of the suspect in both robberies. FBI agents superimposed a height chart on the surveillance video from both robberies.

An investigator for the Denver District Attorney’s Office used a yellow tape measure in a private room next to the courtroom and found Talley to be approximately 6-foot-3.

“I guess they hope I shrunk and lost weight,” joked Talley, who added he weighs 240 pounds, much heavier than the suspect estimated to weigh 175 pounds.

A spokeswoman with the Denver District Attorney’s office refused to discuss the height discrepancy, saying it would be inappropriate to discuss a pending case.

“I’m getting a little frustrated. Seems like they’re playing games to delay the inevitable,” said Talley who had hoped prosecutors would dismiss the case at the last hearing, let alone Thursday’s.

Talley is due back in court April 21 for a motions hearing.

This just goes to show the lengths the state is willing to go to protect itself – as outlined by Josh in his series “Abolish the Police.” While the police clearly have the wrong guy they are going through great lengths, including using the FBI, to find a way to make Talley the perp.

Luckily for him all attempts have failed thus far and it seems that the clock is winding down on the eventual lawsuit that will come.

Will update this post again after the next hearing.

Steven Talley’s first submission to CopBlock.org via the submission tab was to bring to light his wrongful arrest at the hands of Denver SWAT and FBI. According to that post:

As you’ll see from the news report, I had an airtight alibi. I was actually working at the time as a financial professional. The Denver police didn’t even use the fingerprint evidence they collected “to be used in a comparison exam should a suspect be developed.”

Since Talley had an airtight alibi the charges on both robberies were dropped.

Which brings me to Talley’s second submission to CopBlock.org to bring to our attention is second wrongful arrest. And I wish I were joking when I say, it’s for the same robberies he was previously arrested for. Seriously, I cannot make this crap up.

In December of 2015 Talley was arrested and charged- AGAIN – for the second robbery. This time he was living at a homeless shelter so his arrested wasn’t as traumatizing. Nevertheless he was carted off to jail by police and placed on a $50,000 bond. Luckily, it didn’t take as long for the State’s bogus case to expose itself. According to Fox 31:

But at a preliminary hearing, his defense attorney pointed out Talley has a mole on his right check, something not seen on the bank robbery suspect in the surveillance video.

“If they can miss a mole on a guy’s face, I don’t know how anyone can rely on this facial recognition technology,” defense attorney Benjamin Hartford said.

In addition, Hartford introduced a witness from a church food bank.

Deborah Hicks testified that her sign-up sheet showed Talley had checked in on the morning of the bank robbery, though she couldn’t say he was definitively at the church at the time of the robbery.

Bonita Shipp proved to be a more important witness. She’s the bank teller who was robbed on Sept. 5, 2014. Shipp testified that Talley was not the man who held her up.

“It was a surreal moment. I mean it felt good when she said that. I figured at that moment they were just going to dismiss it because they didn’t have a case. It was ridiculous,” Talley said.

The judge did not dismiss the case but he did order Talley released on a personal recognizance bond, which allows a defendant to be freed without spending a dime in bond money.

The judge said he was changing the bond conditions because he considered it “unlikely” that prosecutors could convict Talley at trial.

For the second time Steven Talley was released from jail but, unlike the first time he was released, his charges are still pending. This is one the more absurd cases I’ve ever blogged about. Talley seems to be getting hammered by a number of areas and highlights a number of problems with the system as a whole.

First, there’s the error factor and the slow process that it takes to correct itself. Talley sat in jail for nearly two months when prosecutors refused to analyze fingerprints and after hearing of his alibi. You can write this off and say this is rare but know it’s not. What’s rare is that the wrongfully accused are released without any loss. Many are even forced to take plea deals and, as Talley mentioned, they can be just slaps on the wrist (for a crime you didn’t commit).

Second, we have the brutality of the SWAT team and the stupidity of the FBI. We all know the thin blue line is real but to hear an officer say, “Don’t f*ck with the biggest gang in Denver” is terrifying. Especially since after this statement a number of “good cops” beat Talley to a pulp and threw him in a cage with limited to no medical attention. Furthermore, this case highlights how far the thin blue line really goes. While a Denver detective was the one to start the push for recharging Talley, you have to assume the FBI was in on it too. They clearly produced a false report that stated facial recognition identified Talley as the robber. Or the quote by his lawyer, stating such technology as unreliable, is correct. Either way it’s not good for the agencies deemed with caging the bad with sound evidence in the absence of personal opinion.

Let’s not forget that the FBI is in the middle of another PR disaster when their operation against “occupying ranchers” killed LaVoy Finicum. The FBI released the video of the shooting with the belief that it was clearly justified. All they’ve done is add more criticism to their actions and produced a video without supporting facts (autopsy, pictures of truck, weapon and more).

And last, but not least, we have the standard government lack of accountability. While it’s clear that at least a few public officials knowingly participated in Talley’s wrongful arrest, prosecutions and detainments, not a single person has been arrested. A SWAT team showed up a Talley’s house in with flashbangs, firearms and a beating. Yet, with more evidence pointing to those with badges for wrongdoings, no action has been taken, not even the common sense of dropping the charges.