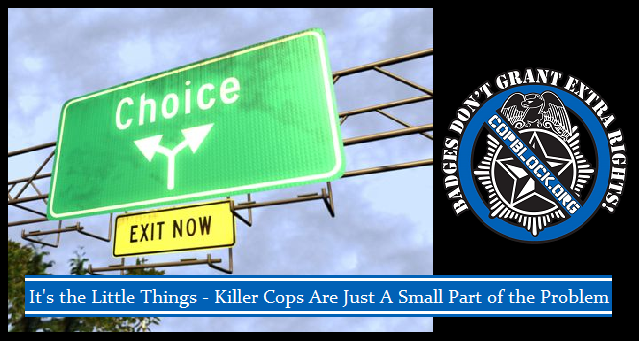 It is always outrageous and tragic when someone dies unnecessarily at the hands of the police. Regardless of race, class, gender or any other human classification, every one of those deaths is a vile act of horror that reverberates all throughout our species. Yet sometimes I wonder if we are so wrapped up in our loss that we are unable to see the greater truth. Each of us will die. Leaving behind loved ones and them having to go on without us is certainly a very real and powerful loss. Yet death is an inevitability, so it is not the dying that should most alarm us, but the killing.

Killing is a pox upon our collective consciousness and identity. It forces us to redefine ourselves on its terms. Killing is not inevitable. It is a choice. Whether the killing is done intentionally or there was some chosen act of negligence which resulted in it, homicide is unlike death. We are not forced to accept it. We are only unnaturally forced to endure it. Killing creates a culture of fear and hatred and has human beings pitting themselves against one another in ways that make the world a much uglier place. The ultimate issue of killing, or even the threat to do so, is it removes from us the basic essence of our human nature- individual freedom.

I am not talking about ‘rights’, either. ‘Rights’ are what the people who usurp your liberties and freedoms call the consolation prizes they give you in return. Liberties are your mobility in the social environment. Freedom is the innate drive for one to act freely without some internal or external force diminishing the ability of the individual to shape their own autonomy and will. Freedom is the condition we are born into and quickly conditioned against by the forces that consume it and excrete it back out at us in rights and privileges. And nothing can threaten freedom like killing or the threat of. And while killing ultimately removes the individuals freedom from existence, the threat of killing is at work in everyday life in millions of insidious ways destroying our freedom by creating unnatural consequences and limiting our choices without our consent.

While killing stands out as the most obvious and egregious way that we are stripped of natural freedom, it does not add up to all of the lesser thefts of freedom that we experience as part of everyday living. Our law-makers are predators that have gorged themselves on our freedoms through the enactment of more laws than anyone could break or enforce in a lifetime. And the enforcement branch has tagged shortly behind like jackals waiting to pick the rest of our freedom from our bones using the same penal codes. And it is inevitable that violation of any law may ultimately result in the death of the law-breaker. Non-compliance, even when peaceful, is lethal. So every law, no matter how small, is a death threat that forces you to either conform or face repercussions for exercising your freedom in ways that are illegal, even when they are not hurting or interfering with anyone else.

No more could this be true than with the War on Drugs. This ongoing act of domestic terrorism against the people by those who claim to be their protectors has eroded our freedoms in immeasurable ways. It is easy to notice the more obvious ways, such as imprisonment. But even having small amounts of demonstrably harmless drugs can lead to a legal encounter that changes ones entire life. Especially in the age of internet where everything that we do is pretty much available to everyone else. Possession of a small amount of marijuana might land you a ‘Possession of a Controlled Substance’ charge which allows schools, landlords, employers, potential mates and everyone else with the access to the information to judge you based on that criminal label alone. In removing these opportunities, our choices become narrowed. A ‘crime’ that harmed absolutely no-one has now become a shockwave that will reverberate throughout the rest of your life preventing you from your dreams and potential. This is not a rhetorical example, either. It is one which occurs untold times every day, leading promising people off the paths they chose for themselves and onto paths that will continue to narrow their freedom and destroy their mental health and self-identity for all of their lives. When breaking a law comes to define you,  any law at all no matter how petty, you no longer have the freedom to define yourself.

The same can be said for all victimless crimes. But even that example is more obvious than some of the more subtle ways that we are compromised by our legal system. We are conditioned by it. Being forced to conform to it makes us identify, empathize and side with it in ways that are harmful to our individual psyche. Nothing is sadder than a person who has endured a lifetime of restrictions and ideologies that has led them to rabidly support and admire the very forces that enslave them. And since those forces use not just the threat of violence against us, but predicate that threat on a mythology of fear in which we are conditioned to believe that the bad guys are hiding around every corner waiting to eat us up, we become enslaved to our own inner darkness and turmoil. This system survives on fear. Every defense of the system by those under its boot always comes out in the form of statements of fear. And if a loss of freedom removes one’s ability to define their self, fear steps in and does that defining.

We are ideologically enslaved by the system. This is its primary function. It first attempts to control you through fear and conditioning. If you break its control boundaries, it punishes you in ways that last a lifetime and erode your potential. And if alas you are unwilling to accept it doing all of this it will outright kill you. It doesn’t matter if you are a young black man in a Midwest city street or an old white rancher on a country highway, it will kill you. But before it ever did that it controlled you in countless ways more numerous and insidious than can be measured.

If the outrage for the obvious and egregious trespass of police killings was equally represented for the damage authority did in all the little things all of the time, that outrage would be a howl that could huff and puff and blow the house of our entire legal system down. Let us not, as we say to our loved ones at funerals, get together only when these tragedies happen. Let us join to reconnect and celebrate ourselves and promote the freedom of all individuals by fighting together against the singular set of forces that stands against us. We need not commit acts of outrage or violence, either, because the same is true of the greatest erosive forces of our freedoms as are the ways we can recapture them together- It’s the little things.