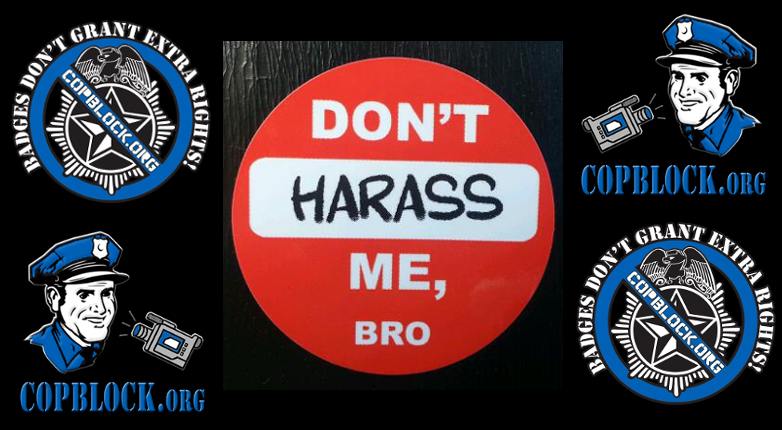 The following post was shared anonymously by a reader, via the CopBlog.org Submissions Page. They chose to only be identified by their initials out of a fear of retaliation from government/law enforcement officials, due to the small size of the town in which they live.

Saturday afternoon (01/30/16), I was at home watching TV when there was a knock on my door. When I answered the door, there was a man who appeared to be about 50 years old in plain clothes standing on my porch holding papers that looked like a fake summons. Since I’ve had a lot of financial trouble recently and had loan companies trying to pull all kind of crazy things, I just asked the guy what I could help him with.

He asked for me and if I was me. When I refused to answer or give him any information, he started getting rude. Throughout the whole incident, he never identified himself in any way. Instead, he kept persisting and getting more and more rude. So I just told him I was done arguing with him and told him to get off my property and not come back. That really set him off I guess, because he turned around and started putting everything in his pockets and bowed up and told me he wasn’t going anywhere and he would come back anytime he chose and belligerently asked me “what are you going to do about it?” I again told him to leave and that if he didn’t he would find out. At this point he stepped up into my face, while I was still standing inside with the door cracked open, and YELLED in my face, “I’m an officer of the court don’t you DARE threaten me!” I told him I hadn’t threatened him yet and that if he didn’t leave I was calling the city police to file trespassing charges against him. At this point, he started calling me out and telling me to step outside and he would assault me. (His words were that he would “kick my ass.”)

This is on MY front porch, mind you. So at this point, I had no idea who he really was or what he would do and was starting to fear for my safety and thought it may escalate to the point I would have to defend myself or possibly even have to draw my weapon, I didn’t though. As bad as I wanted to go out and give him a lesson in manners through the language of boxing, I was able to remain calm and once again told him I was calling the police.

By this point he was yelling where the whole block could hear him, cussing at me, and calling me all kinds of names. Meanwhile, a woman driving the SUV he came in was laughing out loud while he yelled and (I apologize for the profanity, but I think it’s important to convey the level of unprofessionalism and hateful language this “officer of the court” was using in his verbal assault on me and the terroristic threats of physical violence) and told me instead of the local police I should call my momma, because I wasn’t a man; I was a pussy.

Whenever I attempted to say something, he yelled and called me a faggot. And like a small child arguing with another, every time I attempted to say anything he just kept yelling “FAGGOT”, “FAGGOT!!” Then as he made it to the curb, the woman driving threw a stack of papers down in my front yard and the wind was blowing about 30 mph, so half of them went blowing down the street. They then drove off laughing.

I attempted to make a report with the Ardmore Police Department, but the dispatcher made light of the whole thing and kept saying, “so what;” “let him throw the papers.” So, I knew that since I was making a report against basically a second cousin, more or less (city police/county process server) and by her humiliating attitude that was going to be a waste of time. Next, I called the Carter County Sheriff’s Office in Ardmore to get information on the process servers and who was in charge of that department. However, their dispatcher wasn’t any more helpful than the city dispatch and told me they only had one.

So, I’m thinking great the department size is one and that means the guy standing in my yard calling me a faggot and making threats against me is likely the head of the servers, as well. If anyone knows where I can file a complaint outside of the Carter County Sheriff’s Office, like maybe with a state agency, the attorney general, or a private attorney?? If someone has any information that may help, please let me know