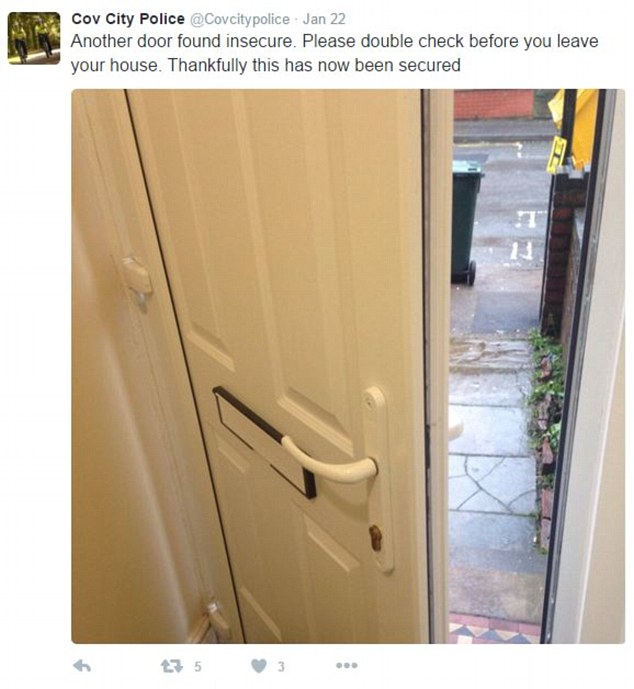 Cov City law enforcement recently went patrolling door to door and entered unlocked homes to show locals how easy it is for a burglar to break in.

If the building was unsecured when police attempted to enter the premises, they would continue on in and actually entered the homes of at least 6 people to insure that a robbery was not in progress or already occurred.

If families were home law enforcement would kindly remind them to lock up and teach them a valuable lesson.

On finding open door, we shout for occupants, before entering to find someone to lock the door & make sure burglary has taken place already

As you can imagine many locals have taken to social media to voice their concern, many curious what legal process if any was used to make decisions to enter private homes without a warrant.
Many citizens feeling the action was entirely all to extreme and calling it victim blaming at its finest.
Ally @Chilari tweeted @Covcitypolice “Warrant issues aside – haven’t you just told thieves where they can find unlocked doors with this?”
Mike Hatton @Parax tweeted @Covcitypolice “Victim Blaming at it’s finest! #appalling What next? Don’t wear short skirts. Stop making it easy for rapists#rapedinseconds“
Alex Robinson @LordOfDoughnuts tweeted @Covcitypolice Um…is that….y’know…..legal?

In the United States, police have just started dabble with the victim blaming thought process. We saw last year Illinois police enter unlocked vehicles to remind people to lock up to prevent vehicle theft and even in one instance, New Hampshire police intended to grabbed belongings and bring them back to the station to teach locals a lesson.

It is foreseeable that similar door to door programs could pop up in America in states like California or Illinois.

1.8k
SHARES
FacebookTwitterGoogleRedditTumblr
DiggLinkedinStumbleuponMailPrint
You Can Support Cop Block by shoppping on Amazon using the banner below:
BANNERS ARE CLICKABLE