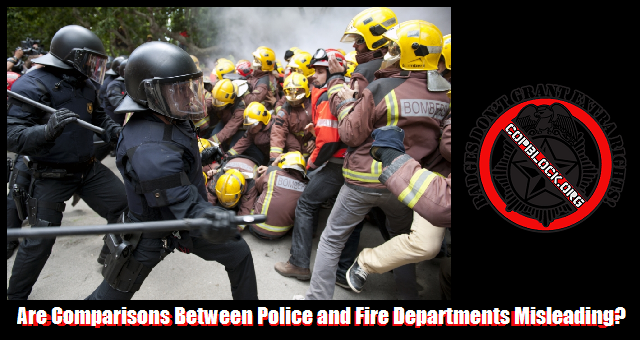 I often see other police-critics making comparisons between police and fire departments in a way that suggests the superiority of the methods and activities of the latter. The argument generally states that fire departments, unlike police, do not go out looking for trouble. This assertion is demonstrably untrue as the following observations will attest to.

In most towns or cities of and beyond a certain size, where quite often the fire department is comprised of many full-time paid employees, fire department first-response units are dispatched alongside police and medics, even in mostly routine situations where there is no specific reason to believe that their assistance is required. This observation is often responded to with empty platitudes like ‘Better safe than sorry.’ or ‘What if waiting to be sure made them too late to help?’. While those are enticing appeals to our basic fears, they are not necessarily rational. An emergency situation could require any number of specialists to make the crucial difference in response success, but to suggest that we send someone representing every skill set to every emergency is impractical and illogical.

For instance, most emergency situations have a psychological component. Addictions, mental illnesses and fear of the responding authorities often lead to the most deadly or otherwise damaging interactions between police and the public. The knowledge and skill sets of psychologists and field counselors are far more necessary in most emergency situations than those of fire departments. In fact, psychologists and mental health experts and counselors could do much of the work that we send people with guns and badges to do, more efficiently and peacefully.

As a society, we are conditioned to ‘fight evil’ rather than provide compassionate and rational assistance to help resolve a bad situation with the best interests of everyone involved in mind. We see police and firefighters as heroes sent to fight off the scourges of evil and destruction that threaten us, and so attached are we to this symbolic drama that we ignore peoples actual needs. If the logic employed by public officials for writing policies dictating responses to situations that potentially involve an emergency, which is used to justify sending firefighters out on every call with potential unknown dangers, then we should be sending an army of specialists out to deal with every situation in which they could be useful in creating the most positive outcomes. The argument that firefighters show up at almost every emergency party out of rational necessity does not hold up to the logic of its own premises.

Another way fire departments go out looking for trouble is when they become lobbyists for and enforcers of local safety codes. When firefighters show up in your home or business to verify that your property is ‘up to code’, they are not responding to an emergency, let alone doing heroic deeds. When they threaten to issue fines, condemn or evict property owners for running their own homes or businesses as they see fit, yet which do not satisfy the edicts of the enforcers and their sacred codes, this is going out looking for trouble.  Their arbitrary inspections do not address safety issues as they occur, they just routinely enforce potential incidents using threats of aggression against those who do not comply.

Using statistical models created by insurance companies that describe circumstances which increase the chances of a fire hazard, fire department officials and unions lobby local politicians to enact codes in the name of safety. Yet statistical models describe only a theoretical world, and do so only through correlations, and not the precise causation of any individual incident with its myriad of unique factors. The enforcement activities of institutionalized professional fire departments have no direct bearing to safety.

For both of the examples mentioned above in which fire departments go out looking for trouble, there is a far simpler and more rational reason they do so than those we are given in the socially acceptable talking points provided by public officials and their lackeys in mainstream media. Sitting around waiting for fires to happen, which is actually a pretty relatively rare occurrence (thankfully), doesn’t employ many people. It is in the best interest of professional firefighters to expand their duties outside of actually fighting fires, as a matter of job security and upward professional mobility. In the last several decades firefighting has increasingly become a paid profession, rather than a matter left to unpaid volunteers from the community. As it has done so, the number of duties tasked to fire departments has increased, even though technological advancement has made us safer from fires than ever before.

Fire departments themselves have become institutionalized. They are no longer organized by the values and standards of the community, but based on principles and connections that extend into federal legislators and laws. As a monolithic and widespread institution, like policing, fire departments have become a living system that has taken on survival, growth and evolutionary needs of it’s own. The institution of firefighting no longer exists solely for the needs of those who require fires to be prevented and fought. It has taken the shape of a distinctly unique entity with its own needs and desires. And like everything else, the health of the institution and those it employs is predicated on its economic power. Firefighting for profit is now a thing, and as with policing for profit, corruption and misuse or abuse of power become an increasing factor.

This has become apparent in the last few decades where fire department officials were called in to shut down otherwise legal protests in the name of safety. Dissent is an important factor in maintaining our freedom and liberties from abusive and corrupt authorities. Without that freedom and liberty, there is not a world worth keeping safe. A safe cage is still a cage, and no amount of safety justifies the cages that are created through blind obedience to arbitrary safety protocols. When fire departments collude with other government agencies to deny us our freedom and liberty to peacefully gather in protest, they have become another tool in the possession of oppressors and tyrants. Nothing could be so corrupt as to deny us our essential avenues of dissent in the name of fire and safety codes.

A final criticism of institutionalized fire departments is that they are funded through force. One cannot opt out of the taxation that pays for fire departments. A refusal to pay the taxes that fund any and all fire department activities, even if the tax-payer does not approve of or require some or all of those services, will be met with the threat or execution of violent force. Likely by a policing agency. Firefighting agencies, like policing ones, may provide some universally beneficial services. But the moral and ethical implications of these services being provided on the premise of aggression negates their overall benefits to society.

This is not to say that I believe all firefighting services are unnecessary, just as I do not think that all of the (often only theoretical) roles that police play are not of value to communities. Dealing with potential murderers, rapists and other violent criminals must be considered by communities, and factored into the services they elect to solicit individually or collectively; and fires are a very real danger that communities should plan organized responses to. But those responses should be a matter of choice and voluntary consent. They should be tailored to meet the unique needs and circumstances of the community in which they are designed and enacted. One-size-fits-all solutions, products of collectivist nationalist dogmas, are bound by the laws of nature to outgrow their creators and compete for domination over individuals.

I also recognize the courage and bravery of those who walk into extremely dangerous situations, obviously fires – but also the other numerous emergencies they are prepared and equipped to face, and commend their chivalrous efforts to protect property and save lives. There can be no denouncement of the strength and resolve of those who face those kinds of dangers for the benefit of others. We should honor such rare individuals by presenting them with equally honorable opportunities to offer their heroic services to their communities without the degradation of institutionalized monopolies predicated on force and prone to their own agendas.

Comparing institutionalized policing to institutionalized firefighting does reveal some fascinating truths. Yet those revelations are not necessarily favorable to the systematic profession of firefighting. Instead they reveal some similar flaws, which in turn reveals much about the folly of nationalism, statism, centralization and all forms of social organization predicated on singular solutions to infinitely complex problems which are ultimately answered with the aggressive bludgeon of force, compulsion and coercion. Abolish police, the state and all of its monolithic agency-entities, and let every community source out the solutions to problems like crime and fires in ways that represent the needs of the people within them, and not the institutionalized images created by those who profit from the inevitable corruption, misuse and abuse of the powerful monopolies they administrate.