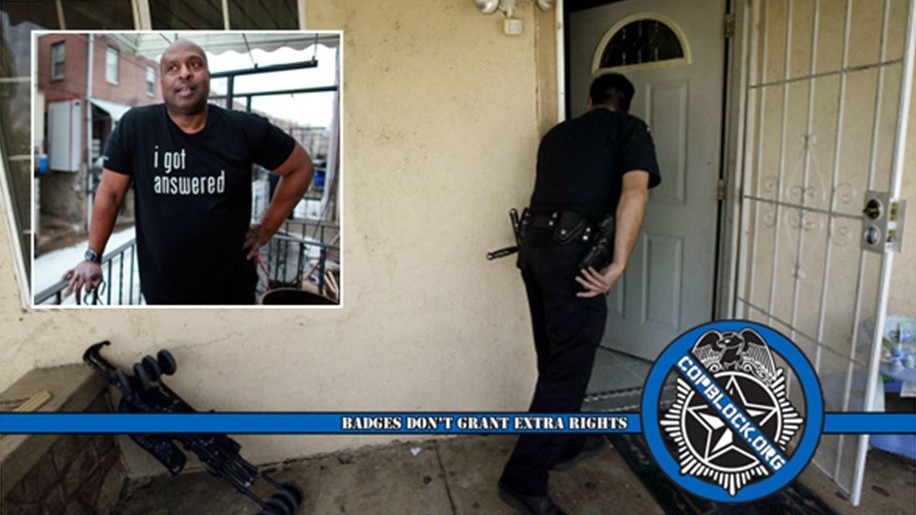 A retired Philadelphia police officer is saying in a complaint made to Internal Affairs that officers with the department forcibly entered his home and assaulted him after falsely accusing him of paying for a takeout meal with counterfeit money.

Fifty-four-year-old Kevin Booker says he began hearing someone pounding on the door of his home on Ashdale Street at around 11:30 p.m. on Jan. 8, but when he answered, there was no one there and he went back to sleep.

About an hour latter, Booker says the pounding started up again so he nervously grabbed his .380-caliber handgun and went back to the door. He asked who was knocking and found out that it was the police.

Booker claims that he placed his firearm on a banister and then opened the door to cops erroneously accusing him of passing off two fake $10 bills to a food delivery person from Sorrento’s Pizza in order to pay for a cheesesteak and a pie.

Booker said the delivery driver stood near his house while one of the cops questioned him about the supposed transaction. He says he tried to explain that he hadn’t ordered any food and didn’t know what they were talking about.

“[The cop] said, ‘Look, if you don’t give [the driver] his $20, I’m taking you to Northwest Detectives,'” Booker said. “I didn’t order any food. I asked the delivery guy, ‘Are you sure you came to this house?’ He just pointed at my address number and then at his phone.”

According to Booker, he told the cops to check the phone number on the delivery slip in order to show that the number wasn’t his, but the officers didn’t oblige and instead barged into his home, threw him onto the floor, handcuffed him, and punched him in the back of the head.

He says one cop rifled through his trash, recycling bin, and refrigerator, attempting to find evidence of the takeout meal. After nothing was found however, Booker says the officers took the handcuffs off him and left.

“I said, ‘I used to be a police officer,’ and the one officer said, ‘I don’t care. It doesn’t matter. You probably got fired anyway,'” Booker said. “This is the kind of thing that makes it harder for people to trust the police and it makes people like me angry.”

Booker said that after the incident, he was able to track down the delivery driver, who explained that someone had used his address to order the food, and then paid him with the counterfeit money at the curb and left.

After filing the complaint with Internal Affairs, Booker – who worked for nine years with the Philadelphia police department until 2000 when he left because of a knee injury – said he obtained a civil rights attorney who will decide how to move forward with a lawsuit after the investigation.

“I think [the officers] need to be fired,” Booker said. “They didn’t do their jobs properly. They violated me.”