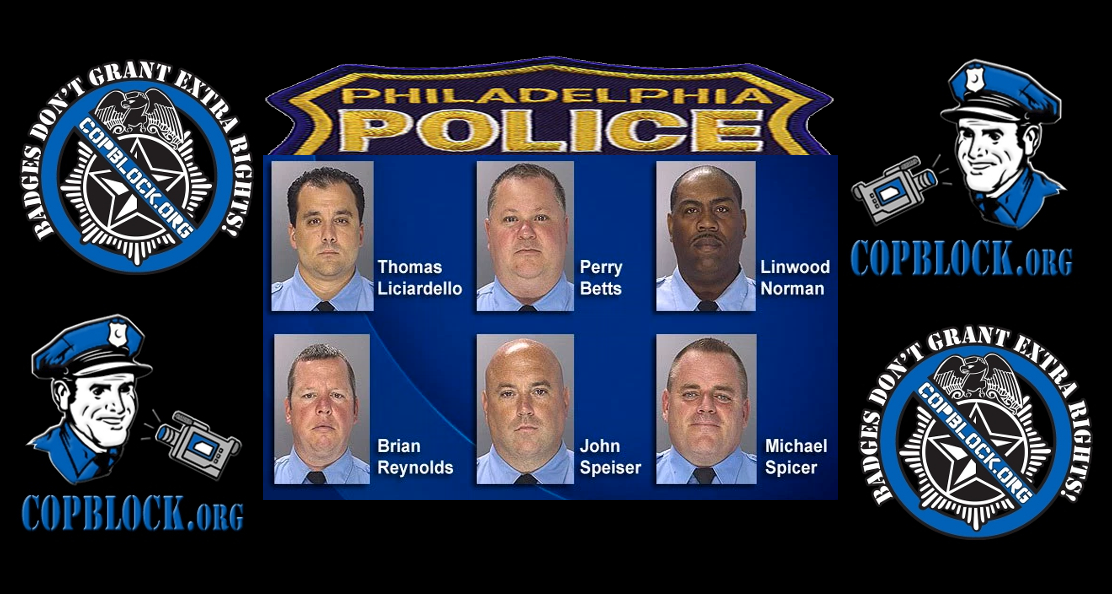 The following post was submitted anonymously, via the CopBlock.org Submissions Page. The case of the six Philadelphia cops discussed in this post has been previously discussed on the CopBlock Network. Those posts can be found here, here, and here.

THOUSANDS of Philadelphia cops were involved in 600-plus dismissed/reversed cases of six narcotics cops (about 1,000 cases in total are to be dismissed/reversed, as per the Public Defender’s Association.) That is because dozens of officers were involved in each of the thousand fake cases, which were scattered throughout the city. For those reasons alone, THOUSANDS of Philadelphia cops are possibly corrupt!

The six referenced officers have cost taxpayers over $30 million (and counting to $50 million-plus) in wasted prosecution costs of over $50,000 per case (including prosecuting attorneys’ fees, court costs, incarceration costs, police compensation, etc.) and corruption/brutality lawsuit settlements.

In May 2015, the six “allegedly” crooked Philadelphia cops were acquitted by a scammed jury. Prosecutors purposefully presented an EXTREMELY weak case in order to vindicate the obviously guilty cops, with whom they had frequently worked to convict possibly innocent people. During the voir dire, prosecutors deliberately selected 11 wealthy suburban whites to be jurors (only one of the 12 jurors picked was black), knowing that such jurors would side with the crooked white cops and disbelieve the mostly black witnesses.

The sole purpose of the “prosecution” was to give the illusion that the police are being policed, while simultaneously allowing the six “allegedly” criminal cops to receive long, paid vacations. Prosecutors intentionally failed to emphasize the real evidence, which is that a staggering 19 victims gave virtually IDENTICAL accounts of their alleged victimizations, which held up even under intense and sophisticated FBI interrogations. Any seasoned lawyer will tell you that it normally takes merely TWO such corroborating witnesses (even convicted felons) to get a conviction. And many of the cops’ HUNDREDS of alleged victims are NOT criminals, contrary to the blatant lies told by prosecutors.

Do not believe the silly police excuse that the 19 witnesses were not credible because they were not completely consistent in their testimony. All witnesses are inconsistent to some degree, and no defendant would ever be convicted if complete consistency was the standard. The six “hero” policemen, Thomas Liciardello, Brian Reynolds, Michael Spicer, Perry Betts, Linwood Norman, and John Speiser, have since been rehired with back pay. In other words, as “punishment” for “allegedly” robbing, extorting, assaulting, perjuring, and framing citizens, as well as dealing drugs and stolen property, these six thugs in blue have each received a paid, yearlong vacation! This, despite the fact that they have cost taxpayers over $30 million (and counting) in wasted prosecution fees and lawsuit settlements. One officer, Michael Spicer, has even since promoted to sergeant!

Five of the cop thugs have even filed a laughably frivolous defamation lawsuit against Philadelphia’s mayor, police commissioner, and district attorney. We are sorry, obviously guilty but “allegedly” corrupt cops, but the truth is an absolute defense against libel and slander — and such officials are immune from such civil prosecution — so your case will be dismissed on a summary judgement. Your guilt has already been proven by the civil standard, as per the city solicitor’s de facto admission thereof via lawsuit settlements which he made with some of your “alleged” victims. Said three city officials should countersue these five scumbags in blue for malicious prosecution and other points of law.

Also, taxpayers should file a federal class action lawsuit against the “hero” officers and police union, for fraud and violations under the Racketeer Influenced and Corrupt Organizations Act and other points of law, to recoup their losses. The city’s police force actually wanted to hold a parade for these six obese, vertically challenged losers, calling them “heros”.