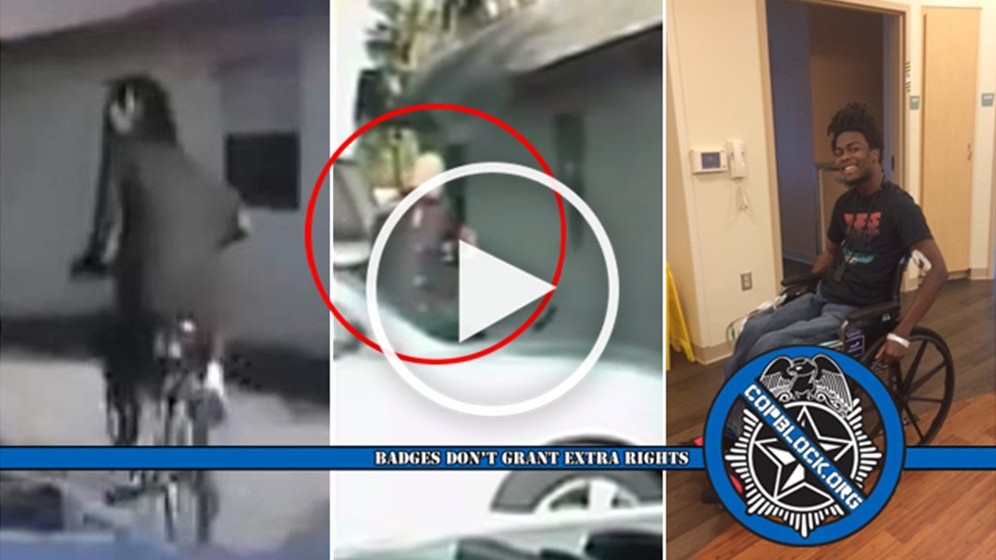 On Wednesday, a federal jury awarded $23.1 million to Dontrell Stephens – an unarmed man shot in the back by a Palm Beach County, Florida sheriff’s deputy back in 2013.

Dash-cam video of the incident emerged in April of last year showing Sgt. Adams Lin shooting Stephens four times after he was followed while riding his bicycle in West Palm Beach.

Stephens, who was 20-years-old at the time, was left paralyzed from the waist down as a result of the encounter.

Lin said he pursued Stephens to ticket him for impeding traffic while crossing a street on his bike and opened fire because Stephens reached into his waistband and he thought he was armed.

The dash-cam footage shows Stephens stop his bicycle next to a house after realizing he is being followed by the squad car, which pulls up sharply behind him. Carrying a mobile phone in his right hand, he walks off camera toward the deputy.

Stephens appears in view again seconds later with his back to the officer and begins to run as shots ring out.

Police initially alleged that Stephens assaulted the officer, even though he never touched him, and insisted he refused to obey an order to get on the ground.

Following the incident, Lin claimed he was suspicious because he had not seen Stephens in the neighborhood before and said, “I feel bad for what happened, but I was not the cause of what happened.”

State prosecutors agreed and initially ruled Lin was justified in opening fire. He was allowed to return to work four days later, but the video – which was released as part of a lawsuit Stephens filed against the Palm Beach County sheriff’s Office – shed new light on the encounter.

Attorneys for Stephens had said that they would seek more than $5 million to cover his medical and future care expenses, but they did not mention what amount they would seek for pain and suffering until closing arguments made to the jury on Wednesday.

During the proceedings, Attorney Darryl Lewis said Stephens will have more than $6 million in medical expenses during his lifetime, and that he deserved at least $18 million for his pain and suffering. An expert concurred with that assessment and said that the young man would likely spend more than 50 years in his paraplegic state.

Police remained steadfast in their assertion that Lin did nothing wrong, and said in a statement that, “Based upon Mr. Stephens’ actions, Sgt. Lin reasonably mistook a cell phone that Mr. Stephens held in his hand for a firearm, and fearing for his life, he shot Mr. Stephens.”

The statement added that Lin is in fact a hero and claimed, “Sgt. Lin then saved Mr. Stephens life due to the fact that he had extensive medical training as a result of serving his country as a member of the U.S. Army while on deployment in Afghanistan in 2008. He did so by rendering first aid to Mr. Stephens until EMS arrived.”

On Wednesday, the jury rejected Lin’s claim that he had made an “objectively reasonable mistake,” and said Stephens was due $23.1 million for the officers actions.

The award Stephens received is not finalized however. In Florida, the law stipulates that any award above $200,000 must be approved by state lawmakers – a process that has taken up to four years for similar cases in the past.

Stephens’ lead attorney, Jack Scarola, said legislators “would not be fulfilling their sworn obligation” if they failed to approve the payment and maintained that if they did reject it, they would be overriding a jury that heard all the evidence and found a “major injustice.”

Lin’s attorneys are expected to appeal the decision and may ask Magistrate Judge Barry Seltzer to reduce the size of the award.