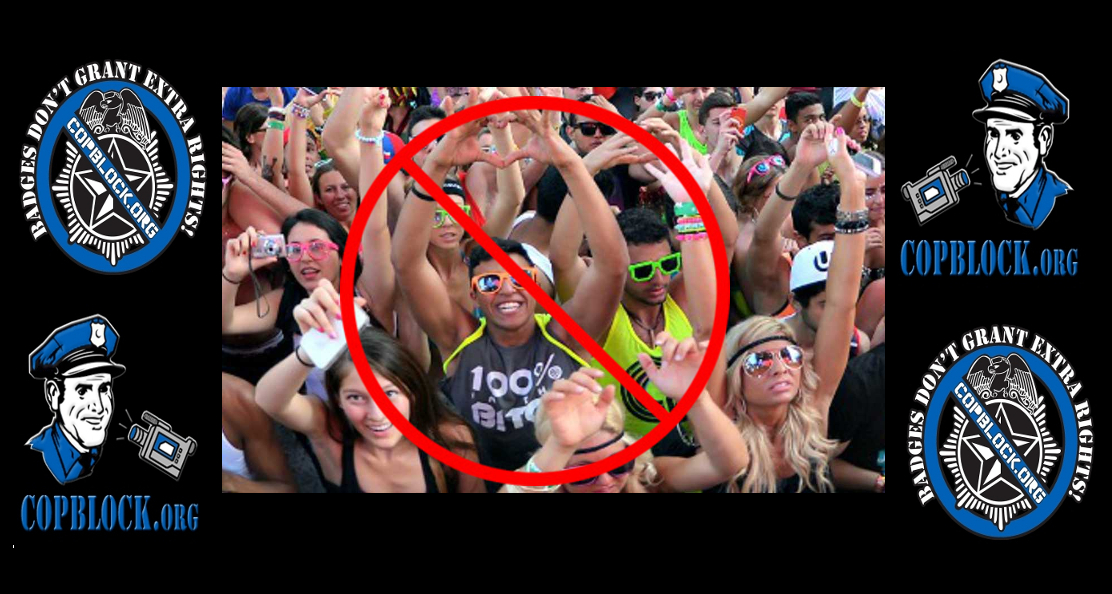 The following post was submitted to the CopBlock Network by Isiah Holmes, who has been featured several times previously on Cop Block, via the CopBlock.org Submissions Page.

Ban All The Music

Music festivals and concerts have always served as magnets, drawing in material from the far reaches of culture. Some gatherings, and their frequenting artists, are regarded as a kind of pilgrimage for bohemian pockets far and wide. Such outlier communities have always seen persecution by the authority, as exemplified by any number of episodes in America’s 1960’s. Perhaps it was this same oppressive, fear mongering spirit that possessed one Philadelphia city councilman to recently propose a blatantly unconstitutional bill. It’s mandate: to add concerts and performers to the police surveillance state’s lengthy target list.

The bill, first proposed by City Councilman Mark Squilla, according to the Free Thought Project, essentially steamrolls the First Amendment. Squilla intends to create a police database of music performer names, addresses, and phone numbers. Under the new bill, police would have access to a database of every band, DJ, and performer whose info can be pulled any time for any reason. Venue owners, the Free Thought Project reports, would pay five times the current price while being forced to collect and surrender performer information.

If that wasn’t orwellian enough for ya, Squilla also aspires to blacklist artists and ban their performances. As a performer, simply having a few rowdy crowd members could put you on Squillas band list. Groups, or even whole festivals, get banned when any “crime, traffic, litter, noise” is present, or even if neighbors find it inconvenient.

“Giving performers’ information to police when requested”, Squilla explained via email, “enables them to review past performances to see if there were any public safety issues during their events.” Mark Squilla’s bill, according to the Free Thought Project, also targets clubs which stream music for termination. The controversial council member affirmed his belief that live music attracts crime, and that his bill does not target specific artists.

“This is news to me”, says Sean Agnew of R5 Productions, the Free Thought Project reports. “As someone who books 600+ shows a year, I have never once reviewed an artist’s home address or phone number. It’s all through booking agents, managers, publicists. There is a firewall in place with the artists.” Squilla’s bill, obviously, seeks to infringe upon that firewall, and really for what purpose?

“This bill”, reflects Deputy Legal Director of Pennsylvania’s ACLU Mary Catherine Roper, “reflects a strange expansion of police duties and a dangerous muddling of the line between law enforcement and business licensing.” Roper fears the Pennsylvania police will “approach it as another police function, informed by police priorities that may not be appropriate to the task.”

It does more than just reflect a strange expansion of duties, it’s blatantly unconstitutional. The First Amendment protects free speech, expression, and peaceful assembly. Compiling that specific data is bad enough, but forcing venue owners to do it–while charging them more–and then banning the artists is another level. Not only does this bill discourage musicians from frequenting Pennsylvania, it restricts the native music scene. If there’s anyone who should be outraged it’s right-wingers who hoot and holler in favor of a “free”, aka deregulated, market.  Additionally, passing such a law opens legal doors for the authority to more easily violate basic rights in the future.

Mark Squilla’s law enforcement database idea rings shades of CIA’s Operation: MH CHAOS in the 60’s. Under the espionage program, groups and/or individuals associated with the civil rights and anti-war movements were ruthlessly monitored. MH CHAOS also targeted music groups which were seen as figures of the counterculture. Jim Morrison, John Lennon, and Jimi Hendrix were all targets of this unethical crime against the state and it’s people. Of the three performers named one was assassinated, another possibly murdered, and one pursued by the FBI on trumped up felony charges until his death. The same crimes continue today, whether it’s the NSA tapping phones and emails or it’s the FBI flying spy planes over crowded cities. These groups have proven themselves untrustworthy, suspicious, and eager to monger their fears. Mark Squilla, and his bill, are no different from these entities or their programs. There’s no room in a free society for such an intolerant and undemocratic propositions as his.