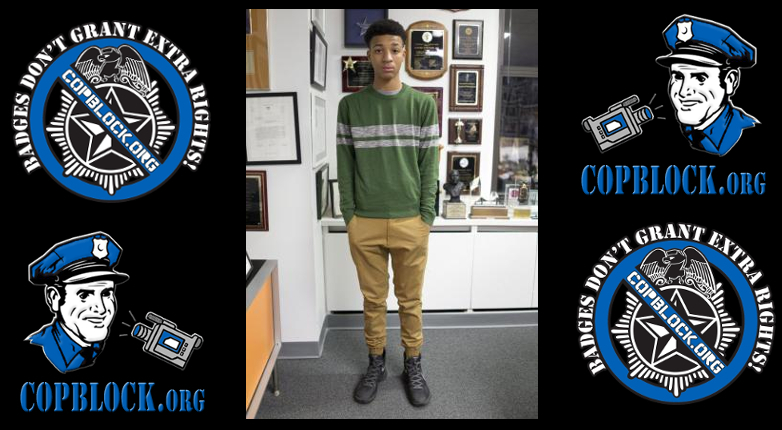 We already know from previous stories on the CopBlock Network that bullying runs in the family for cops and, of course that cops have no problem being physically abusive even when their victims are children. However, this is a case of a cop going above and beyond his heroic duty of beating school children by actually encouraging his son to assault another child and then personally attacking a 13 year old student that broke up that fight while off duty.

The incident apparently happened on a school campus in the Bronx. It turns out the victim was trying to break up another fight.

13-year-old Justin Harris claims he was not only attacked by a classmate, but that the student’s dad, an MTA police officer, allegedly joined in.

The eighth grader says it started after he tried to defend another student from the alleged bully at Bronx Mathematics Prep School.

“He punched him really hard; he had Ruben on top of my son hitting him in the head. He said to his son, ‘Draw blood,'” said Sean Harris, the victim’s father.

Under the advice of their lawyer Sanford Rubenstein, Justin did not make a statement rather his father Sean Harris explained what happened Thursday afternoon after the school day ended.

“He had to lacerations on his arms, scratches, on his back where he punched him there was a bruise,” Harris said.

“What this family wants is for this Port Authority police officer to be held accountable for what he did,” Rubenstein said.

The off-duty MTA Bridges and Tunnels police officer was arrested and charged with assault.

The 36-year-old Ruben Caraballo turned himself in at the 43 Precinct Friday.

In spite of the enthusiasm the Harris’ lawyer displays in the video below for the accountability that “anyone of any profession faces,” the reality is that cops get away with abusing (or even murdering) children on a pretty regular basis. That includes their own children where the Good Cops they work with often look the other way. Even more so than that, they pretty much have free reign to beat and otherwise abuse children as part of their job. In fact, it could easily be argued that the only reason Caraballo actually got arrested was because he wasn’t wearing his magical uniform and on the clock at the time.