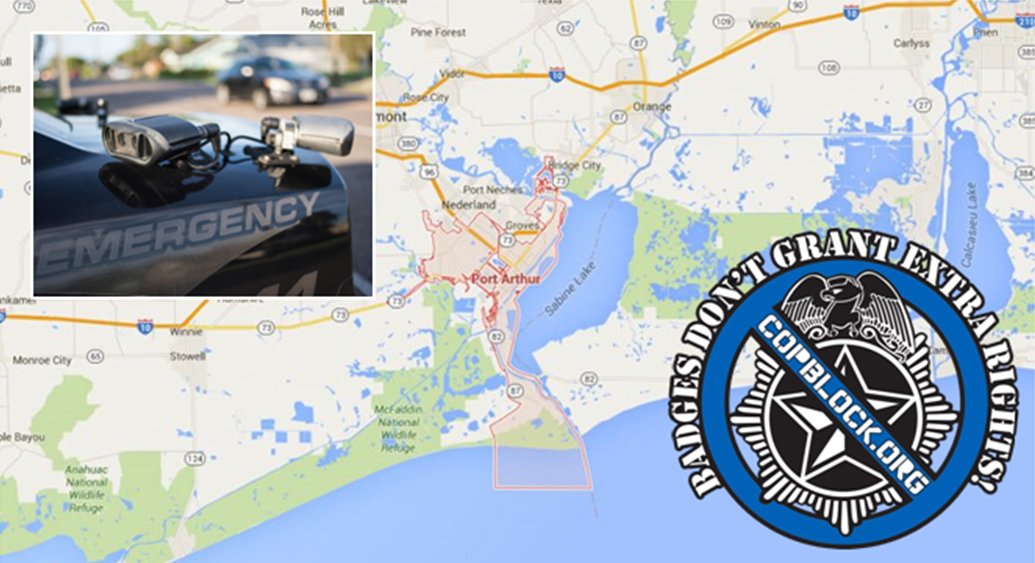 Port Arthur is located in Jefferson County with a population of just 53,818. The license plate readers come equip with three cameras each and scan license plates in order to locate those who haven’t paid traffic fines, or that may be wanted for other reasons.

Police in the town say that once a plate is scanned, “the system searches the entire database in less than 1/10th of one second” and returns data about a query in real time with the new information remaining in the database.

After combining the technology with its eight-man Traffic Enforcement Unit, Port Arthur cops have ratcheted up its traffic fine revenue generation from $750,000 in 2006 to $2.1 million in 2012.

According to the Electronic Frontier Foundation, automatic license plate readers are turning Texas police officers into mobile debt collectors and data miners by giving them access to technology that captures sensitive location information on all drivers, not just criminals.

They say surveillance manufacturers like Vigilant Solutions are utilizing new state laws that allow “officers to install credit and debit card readers in their patrol vehicles to take payment on the spot for unpaid court fines, also known as capias warrants.” The money then goes straight into the pockets of the company to cover the costs of their equipment so that police departments don’t have to.

This corporate-fascist relationship exemplifies the context of the modern American state, where companies utilize government to enrich themselves at the expense of the liberties of the host population.

As government is devoid of any genuine feedback mechanism – primarily, profit and lose – it is unable to gleam, relative to demand, if what it is engaged in is overall benefit to society.

Compulsive funding via taxation means government makes its own priorities for what police should be doing, which leads to things like the drug war and arbitrary victimless traffic enforcement – things that in a market economy, voluntary paying customers would be unlikely to compensate security providers for.

These kinds of perverse incentives lead to nothing more than legalized plunder. According to statistics compiled by Statistic Brain Research Institute, 112,000 people receive a speeding ticket every day in America at the average cost of $152 a piece. That means out of a possible 196,000,000 drivers on the road, 41,000,000 are ticketed for speeding annually – over 20 percent.

That puts the total amount of money paid in speeding tickets per year by American citizens at around $6,232,000,000 making the average annual speeding ticket revenue per U.S. police officer $300,000, with only 5 percent of ticketed drivers contesting the fines in court.

Keep in mind that the aforementioned stats relate only to speeding violations. It appears governments don’t keep track of how many tickets they write, and for good reason. When comparing things like victimless traffic enforcement to cases successfully pursued against actual violent criminals, the picture becomes clear: government law enforcers are nothing more than highway robbers.