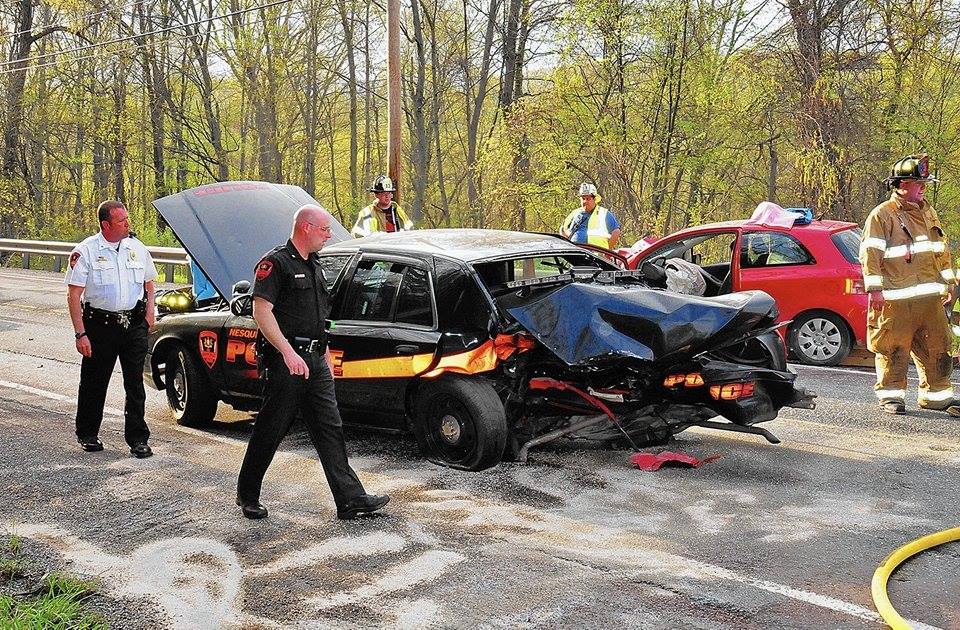 This story was submitted via the submission tab by Matt Taylor of the Oath Accountability Project. These were the words that came frantically over the police dispatch scanner from former part-time Nesquehoning police officer Steven Homanko at 6:22 p.m. on May 12, 2014, after he lost control of his cruiser along Route 209 between Nesquehoning and Jim Thorpe, Pennsylvania. He collided with an oncoming vehicle carrying a Pleasant Valley Elementary School teacher and his wife.

Very few details have surfaced in the years since the crash that left Michael Sauers hospitalized and claimed the life of his wife, Carola Sauers.

According to dispatch scanner reports of the incident, Homanko said he was pursuing a yellow Dodge Neon traveling along Route 209 towards Jim Thorpe. It was unclear from the report if he was in a high-speed chase, but it is noted that sirens could be heard over the scanner.

The Pennsylvania State Police released a statement to various media outlets that Homanko’s destination prior to the crash was, and still is, under investigation.

However, in a statement contradicting the official report, Michael Cardone of Lehighton, the passenger in the yellow Neon, has stated to the media that there was no chase, and that, in fact, neither he nor his girlfriend, Denna Przewoznik, were aware they were being pursued by Homanko.

“There were no sirens,” he stated in a telephone interview the day after the crash to a local paper.

“There was definitely no cop chasing after us. Nobody pulled us over until we got into Jim Thorpe,” Cardone added. He claimed that he and his girlfriend, along with her two children, ages 16 and 11 at the time, were detained.

Cardone and his girlfriend were then questioned for reasons unknown.

Cardone added that they were not arrested or charged with anything, but their car was impounded, leaving the family stranded in Jim Thorpe at 9:30 p.m. three hours after the wreck.

According to court records, Cardone had been in trouble with the law in Nesquehoning, and Officer Homanko in particular, thus establishing a history between the two.

According to the official statement made by state police, Homanko lost control of his 2009 Crown Victoria police cruiser as he rounded a curve about 1-1/2 miles north of the intersection of routes 209 and 93, between Nesquehoning and Jim Thorpe.

The cruiser crossed into the oncoming lane and the driver’s side rear of the vehicle slid out of control and struck a 2007 Toyota Yaris, which was carrying Michael and Carola Sauers.

Homanko can be heard over the scanner saying he crashed and needed medics because he struck a vehicle.

The scanner lit up with a flurry of activity, with calls for Jim Thorpe and Nesquehoning fire companies as well as Nesquehoning Ambulance and Lehighton ALS to assist in the crash. An air medical unit was also called in for transport.

The Sauerses were transported to the Panther Valley Elementary School in Nesquehoning, from where they were then flown to St. Luke’s Hospital Bethlehem. Carola was pronounced dead at the hospital. Michael was hospitalized for severe injuries.

Homanko was transported by ambulance to Lehigh Valley Hospital, Cedar Crest, where he was treated for moderate injuries and later released.

An investigation was immediately opened and the intersection of Route 209 and Route 93 in Nesquehoning and in the area of the Liberties in Jim Thorpe was shut down to traffic so the state police Collision Analysis and Reconstruction Specialist Unit could begin its field analysis.

At a McAdoo Borough Council meeting held the day after the crash on May 13, 2014, local news reported that a number of people came forward to talk about Homanko, claiming that he “has a pattern of harassing people by pulling them over in their vehicles without cause.”

Steven Homanko is son of District Justice Joseph Homanko of Weatherly. He was also employed as a part-time officer in McAdoo. He is currently not working in Pennsylvania as a police officer.

On May 6, 2015 Homanko was arrested and charged with reckless endangerment and vehicular homicide – he still hasn’t been arraigned.

The wreck took place four months after a similar incident occurred in Williamsport involving Officer Jonathan Deprenda. Deprenda was charged in February of last year with homicide by vehicle and other crimes for allegedly causing the crash on January 12, 2014, that killed James Robinson of Williamsport. It took only days to find Deprenda at fault resulting in his charging.