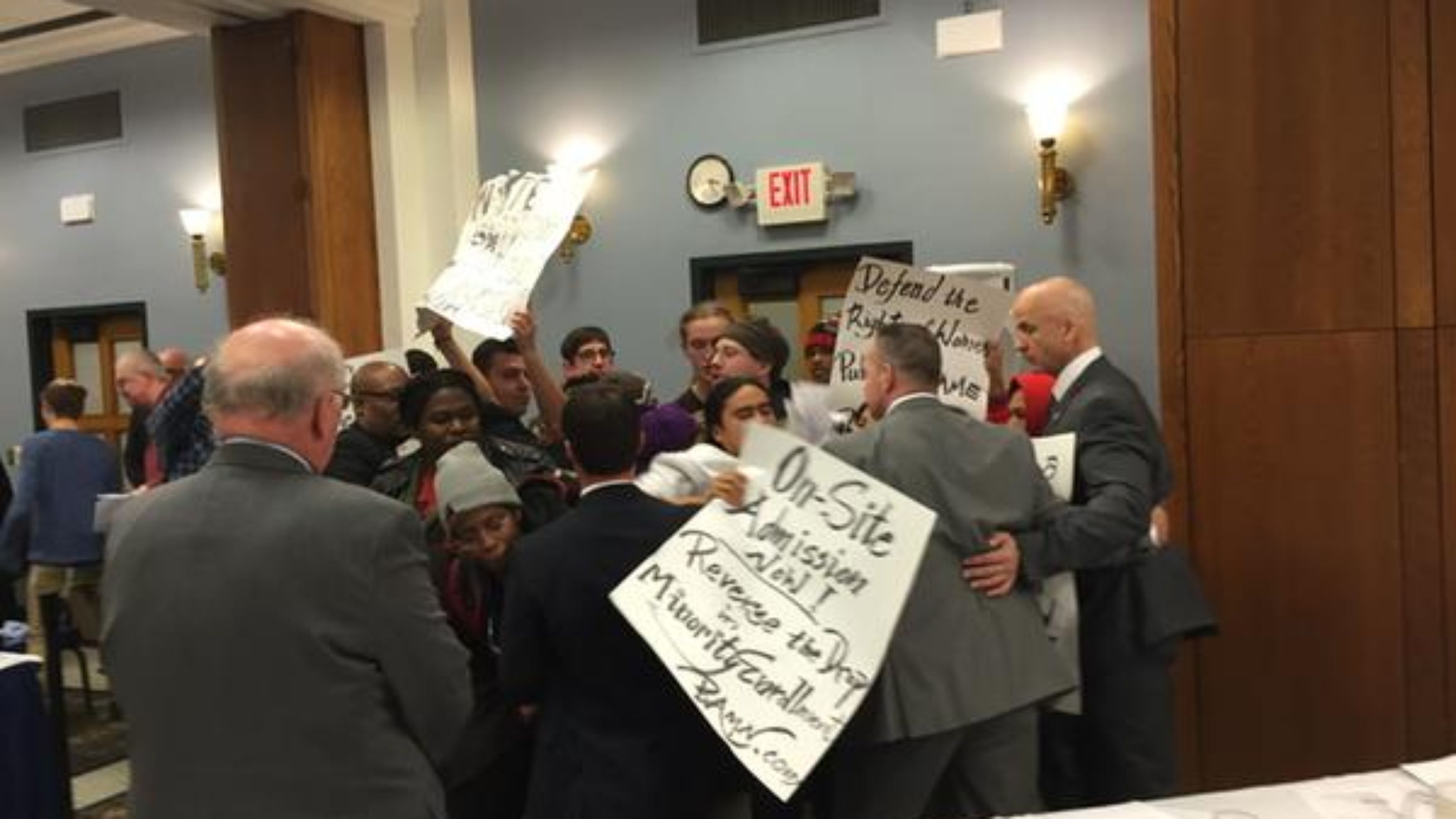 Political movements, particularly grassroots movements, often see little press coverage or glorification. Rather, their efforts are powered by motivated people–acknowledged or not– making the magic happen. Michigan University’s BAMN (By Any Means Necessary) chapter knows this all too well, having pushed hard for on-campus equality. Their demonstrations, however, have sparked tensions with campus police culminating in several micro- confrontations. Such incidents come as student activists organize not against the police, but the university’s administrative leadership.

I personally became aware of BAMN’s efforts in Michigan after discovering a video taken during an on-campus student meeting. The video’s title said it all: “University of Michigan Police interrupt a BAMN Tribunal on Racism and Police Brutality.” Before long I was prompted to write up a story on the incident, but my analysis left out many crucial details. Namely, my last piece lacked a solid context for the nature, and quality, of recent activist-officer interactions.

Some of the earliest Michigan-based BAMN coverage involved not college students, but inner-city high school students. In 2014, Mlive covered a visit to Michigan University’s student activities building by high school-aged activists. The students publically accused the school’s admissions process as starving out the college’s diversity. Either by chance or through coordination, Undergraduate Admissions Director Ted Spencer was present and listened to the chants. According to Mlive, at least four of the students were denied admission to a school who’s black enrollment dipped 4.4%, that year.

BAMN hit the streets in full force following a court decision to uphold a ban on affirmative action in Michigan University’s. According to CBS Detroit, three dozen students crammed into the admissions office, booming a resounding demonstration. Eight BAMN members were arrested during a similar protest at U-M’s Board of Regents meeting. According to Mlive, campus officers and a line of tables had been positioned between college officials and their students. At some point 20 BAMN members reputedly rushed the table barricade chanting “open it up or we’ll shut it down!”

Two male officers began grabbing protesters as others physically shove the crowd back. Activists, onlookers and cops alike tumble and fall upon one another as chants continue. Even school officials can be seen reinforcing the table barricade from their side, undercover officers appear active in the room. Detainee’s, whilst being tackled and handcuffed, continue chanting alongside their comrades.

The situation climaxes, male officers having, once again, roughly forced someone to the ground. One protester asks another if they’re alright, officers now rolling bodies through a mess of downed chairs. One cop orders a protester to “get up”, the seemingly young detainee’s response: “let us go so we can get up!” More officers remained standing than students, barking orders detainees were physically unable to follow. One student eventually exclaims, “I can’t breath!” The video ends with officers continuing arrests, protesters chanting still, and school officials looking on with an aura of concern and helplessness. Their demand remained unanswered: “open it up, or we’ll shut it down.”

This, Mlive reports, marked the second administrative meeting in several months interrupted by BAMN. Demonstrators marched into a November meeting chanting, “minority enrollment is going down, open it up or we’ll shut it down!” Officials relocated to a different room for a closed meeting, reputedly in violation of Michigan open meetings laws. Specifically, protesters demand U-M open up fair enrollment to inner-city minority youth.

It’s easy to scrutinize campus police, and this is warranted, but let’s set this aside for a moment. U-M’s administration, arguably, sits as the catalyst of BAMN’s grievances and, thus, holds responsibility. Holding possibly illegal closed meetings in one instance, and hiding barricaded behind cops and tables in another, sends a clear enough message. To inner-city students, the already undiverse college’s declining minority enrollment represents a lofty barrier between them and any idea of equality. Administrative leadership act this barrier out like children in a game of pretend when they resort to such scrutiny-dodging measures. A table barrier needed to be built before the meeting began, officers briefed and positioned. This was not the spontaneous response of a situationally overwhelmed meeting delegation.

Campus police similarly demonstrate the very things BAMN and other groups have marched against with such tenacity. If you notice, during their more aggressive confrontation with BAMN, only some officers appeared more hands-on. Whereas some simply pushed BAMN’s crowd back others tackled, grabbed, yanked, and dragged students. The words of one student, “I can’t breath”, echo Eric Garner’s final words. Similarly, when officers interrupted a much quieter BAMN student meeting, only one, “Black Hat”, was imposing. Those campus officers able to swallow their ego enough to remain civil are much appreciated.

They’re more authoritative, problematic colleagues, however, represent every so-called “bad apple” nationwide. It’s the department’s responsibility as a whole to handle such things in a professional manner. Tackling students protesting loudly, while intimidating and imposing upon others, is totally unacceptable. As such, like viritually all American police departments, Michigans campus PD as a whole deserve a practices and policies investigation.