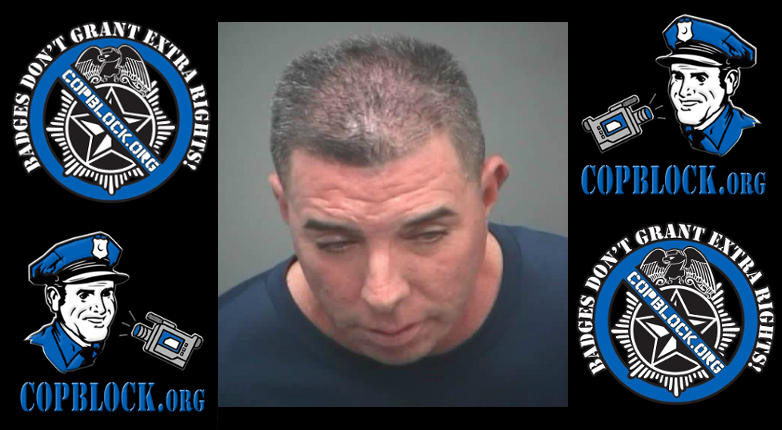 A link to the article quoted within this post was shared with the CopBlock Network anonymously by a reader, via the CopBlock.org Submissions Page.

On February 8th, Sergeant Dennis Stone of the Honolulu Police Department was stopped in his department issued vehicle because his tire was flat and had deteriorated to the point that the rim was sparking. The (unnamed) officer that stopped him quickly determined that Sgt. Stone was drunk. Instead of being arrested and charged with DUI like anyone else that didn’t own a magical uniform and shiny badge would be, that officer gave him a “courtesy ride” home.

Soon after, other officers realized that the tax-payer financed vehicle that Stone had been driving drunk in (shortly after patrolling the streets for people driving while drunk) was damaged and had obviously been in an accident and not just randomly gotten a flat tire. Upon that discovery, a (Keystone Cops style)  frenzy ensued to get Sgt. Stone back to the scene of the crime before any potential victims showed up and exposed how “courteous” they are with their fellow Revenue Collectors.

Although it was eventually found that Stone had actually ran into a curb when he caused the damage to his tax-payer financed vehicle, it is now being reported this Bad Apple likely won’t be able to be prosecuted because of all the policies that the Good Cops didn’t follow when they gave him his “courtesy ride,” instead of arresting him for stuff that they (and he) routinely arrest others for.

And, of course Sgt. Stone has a prior violent crime arrest for beating up his daughter’s boyfriend. Not only did the Good Cops working in the Hawaiian police union get him his job back after that red flag, but he got a promotion shortly afterwards.

In a case that raises serious ethical questions, a Honolulu police sergeant was given a “courtesy” ride home by officers who suspected he was driving drunk, Hawaii News Now has learned.

He was subsequently rushed back to the scene, though, after officers discovered he might have been in an accident in his police-subsidized vehicle.

Here’s what happened: Sgt. Dennis Stone was pulled over January 31, just before 2 a.m. He was off-duty, but driving his HPD-subsidized Dodge Charger.

The officer who pulled him over wrote in his report that Stone was driving on Kahekili Highway with a tire that was so flat it was shredded and the rim was sparking.

The officer also wrote that Stone’s breath smelled of alcohol.

A second patrol officer gave Stone the “courtesy” ride to his home, about two miles away.

But just minutes later, the officers discovered the Dodge Charger had damage to the front fender. That’s when the same officer who drove Stone home rushed back to return him to the scene.

“At the time that they took him home and there was all this damage, they didn’t know whether or not somebody was hurt,” said Burge, who is not connected to the case. “For all they knew, he plowed into somebody two blocks away. That could have been disastrous.”

When Stone was brought back to the scene, an on-duty sergeant responded and noted that Stone’s breath smelled of alcohol and that his face and eyes were red.

He told Stone that he wanted to do a field sobriety test. Stone refused and was arrested.

Officers followed the marks on the highway from Stone’s tire rim about a half a mile — to the intersection of Kahekili Highway and Keaahala Road. They determined that Stone hit the concrete median there and left the scene.

What makes the episode worse is that law enforcement experts say the current case against Stone probably won’t hold up in court.

“The case itself is very weak,” said Aaron Hunger, a University of Hawaii criminology instructor. “I would doubt criminally the prosecutor’s office would see this as a case that would be winnable. A lot of policies were not followed.”

Stone is on restricted duty while criminal and internal investigations continue.

He is a 24-year veteran of the force, and he’s been in trouble before.

Three years ago, as a corporal, he was charged with assault for beating up his daughter’s boyfriend. He was fired, but got his job back a year later. Four months after that, he got promoted.

Obviously, the Thin Blue Line never goes on vacation, not even in Hawaii.