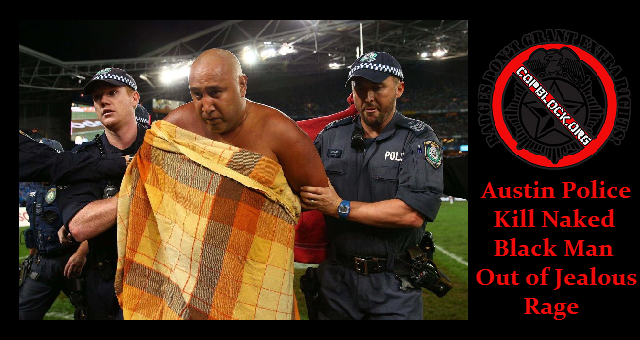 Alright, now before you go getting all up in arms about that title, let us pretend that it were literally true. That would probably have been a better reason than why they actually shot him. The reason they actually shot him was the old ‘he was coming right at me’! Because it makes a lot more sense that ‘charging’ should earn one a death sentence on the spot, right? According to KEYETV:

AUSTIN, Texas — Neighbors are shocked after an 18-year-old man was shot in broad daylight in a quiet North Austin subdivision Monday morning.

Neighbors tracked the man some described as suspicious and naked by commenting on a neighborhood Facebook page.

Police said the man was acting aggressive and erratic, leading several neighbors to call police. What happened next shocked everyone.

In a press conference, police said the suspect did not cooperate after repeated commands from a responding officer.

“Our officer gave commands to the subject who was in the middle of the street,” Assistant Chief Brian Manley, chief of staff at Austin Police. “The subject did not comply with the commands that this officer was giving and instead charged at the officer.”

Police said part of the incident is caught on a patrol car’s dash camera. Police have not said whether or not the man had a weapon– leaving residents with more questions than answers.

Other homeowners did report an unknown man in the area both Monday and over the weekend. Ana Rivera’s sister was housesitting for her when she saw a seemingly disoriented man outside.

The officer involved in the shooting is on administrative duty which is standard protocol. Police have not named the offiver but say he has more than a decade of experience with the department.

Now where, pray tell, does a naked man hide a weapon so that officers are unsure about his weapon status? Were they worried he had a snub nose buried in his colon he might dig out at the last minute and fire? There was never any question about whether the man was armed or not. That excuse is just an automatic go-to for badged thugs after they satiate their wicked bloodlust by killing unarmed civilians. It is one of the trifecta of get-away-with-murder cliches that police use every time they kill, along with ‘He was charging at me!’ and ‘I feared for MUH LIFE!’. In this case Austin police wasted no time in rolling out the red carpet for all three of the typical banalities.

Last night I went to the grocery store and as soon as I got out of my car a crazy person rode up to me on his bike. He told me that I was a rotten son of a bitch and then warned that I would not get away with my embezzlement, and then ended his tirade by making multiple death threats. I had never seen this guy before this. Coincidentally an ICPD vehicle had just pulled up near the scene, so the man also took the time to warn me that he wasn’t afraid of no damn cops. He continued moving closer to me, ie: charged at me. But since I am not a giant fucking wimp, I did not fear for my life. I did what rational people would do and just walked away. Responding would have just been escalating a crazy person in the middle of their turbulence. I have always been a magnet for crazy people. I have been charged at and threatened numerous times in my life and the worst that has ever happened was getting hit by a water bottle once.

If you are going to confront a person in the throes of a mental break down, you are probably going to make things worse. The best you can do is stand back, let the fire die down and make sure everyone is safe. When you do confront them you do it by earning their trust and respect, not making demands and playing McTuff the Crime Hog. This is especially true if you are a public servant whose job it is to insure the safety of everyone involved, even the wacko. Of course we have seen time and again that judging police by what society says they do, rather than what they actually do, will always disappoint. This is why accountability is a thuggish fiction. What cops actually do is make bad situations worse and then profit from it. This is why we must abolish the police.

Had the man last night got in my personal space and become an actual threat, I would have just knocked him the fuck out. Why are cops so afraid to take a punch or throw one? What is with this wimpy ass go-right-for-muh-gun bullshit anyway? Why aren’t communities at least requiring officer standards that weed out people aren’t even willing to use fists and feet before hopping right on the trigger? A naked man running at you is just one scrotal kick away from being completely disarmed. So why did Austin police feel a need to kill him?

Did the naked man have them out-gunned in other ways? Was the shooting caused by insecurity and penis envy on behalf of the cops? Probably not. But that explanation still makes more sense than any other that attempts to paint the victim as deserving to be executed in the streets. Crazy people need help, not lethal gunshot wounds.

Cops generally kill because they are over-trained robots with no dignity, integrity or courage. And killing is not even the tip of the iceberg when it comes to the myriad of ways policing breaks down peaceful societies. I am through with meeting police supporters half way and paying lip service to the myth of accountability. You cannot fix evil, and I will not negotiate with terrorists.