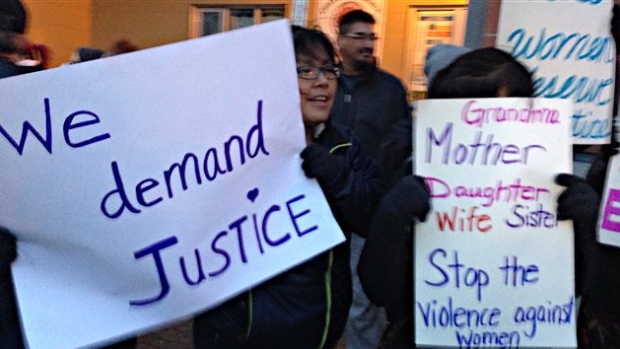 An investigation is under way into allegations of sexual and physical violence toward indigenous women by police in Quebec.

The claims about Val-d’Or provincial police were exposed last year in a Radio-Canada report and involve indigenous women who said they were either forced or paid in cash or drugs to perform sex acts on uniformed male officers.

The alleged victims said that officers in the town northwest of Montreal routinely drove seemingly intoxicated women out of town and left them to walk home in the cold. One woman said an officer physically assaulted her in his police cruiser and left her alone on the highway after she refused to engage in sexual activity with him.

Bianca Moushoun told CBC that as recently as two years ago, officers paid her in cash or drugs to perform sex acts on them.

Carole Marcil, a Val d’Or bartender, alleged that as many as 30 women have had similar encounters and “show up with bumps, bruises, punches and burns.” It is not a force-wide problem but that there are several “bad apples” within it, she said.

At a news conference following the investigation’s late October release, Surete du Quebec Capt. Guy Lapointe said the 14 allegations date back 10 years and that two involve sexual misconduct. Two other sexual assault allegations were made against a ninth officer, who is now dead, he said. Lapointe said that five of the faulted officers still working on the force had been suspended, while three others were switched to administrative work.

“I’ll just go as far as saying that we weren’t aware of all the allegations that were put forward in the report,” he told CBC News.

Montreal police are overseeing an internal investigation that will involve two indigenous officers, the provincial government recently announced. Quebec’s National Assembly has also launched its own probe, according to the CBC.

In the meantime, there have been efforts to improve safety for indigenous women, CBC reports.

All Val-d’Or police cruisers will now be equipped with cameras and occasionally social workers will ride alongside officers. The town is also funding more aboriginal housing and day shelters for the homeless.

The federal government recently launched its inquiry into the national crisis of missing and murdered indigenous women that is expected to address police. However, aboriginal and municipal leaders want to see a separate, provincial effort as well.

The Assembly of First Nations, the city of Val-d’Or and the Grand Council of the Cree are calling on Quebec to hold an independent public commission of inquiry on the relationships between police and First Nations.

“Make no mistake, we do not pretend to have solved the matter and [declared it] over,” Grand Chief Matthew Coon Come said in a news release on December 15.

Such reports are rampant nationwide, he said.

“Reports of abuse continue to come in from other regions, including Cree territory,” he said. “This is not just a Val-d’Or problem. It does not belong only to Val-d’Or. This is systemic. This belongs to everyone. Quebec must take position on these matters of public security.”