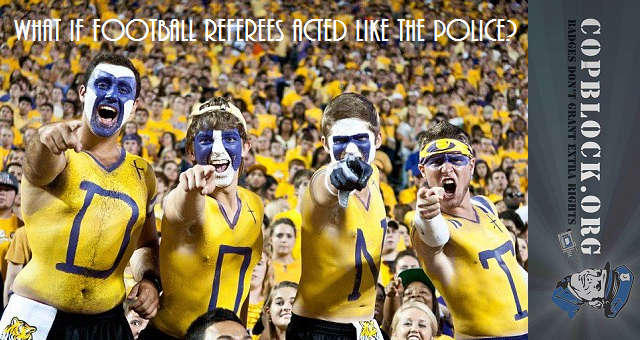 I came across this little gem on the CopBlock Facebook Page wall posts. I do check those from time to time, but if you really want to get something to us to consider sharing it with us at the CopBlock.org Submissions tab.

Blogger Baunini wrote a piece entitled A Little Super Bowl Comparison at http://hiddenthingsofdarkness.blogspot.com/ in which she discusses the gap between standards we have for sportsball overseers and law enforcement. She writes-

Let’s pretend that there is a football referee who has been hired to work the Super Bowl, only he doesn’t really care about the rules, because he feels that his opinion is superior to the rules, and he knows that “for the good of everyone” he must ignore, bend, even flagrantly break the rules in order to push his own agenda.  So he plans to do so.

He absolutely changes the trajectory of the game, throwing flags on plays that don’t deserve it, allowing players that he likes to do whatever they want, and basically deciding unilaterally which of the football rules are “good” for “everyone” at any particular part of the game.  Some people are mad, but the people whose views happen to align with the corrupt ref think those people are crazy conspiracy theorists who don’t understand that the ref is really right, he is not held down by the rules because he is above the rules, he gets to decide the rules on the spot because after all, he is the ref–the authority figure.

The game definitely wouldn’t be fair, and people would be mad about it and complain to the NFL–fire this ref!!  What if the NFL got his back and said, “well, we disagree with what he did, but he’s one of our striped brothers, so we have to get his back, really, he’s only one bad apple ref, it’s not a big deal, how many people can one bad ref actually hurt?”

If this happened, people all over the country would notice, people all over the country would care.  What about real life?  Cops (some of which truly do fit the Criminals On Public Salary moniker) are allowed to interpret, bend, and break laws, even flagrantly LIE in order to push their own agenda, to “make the world better for everyone” by helping their “team” win, and nobody seems to notice nor care.  These are real people whose lives are being touched, harmed, ruined, even taken by police overstepping and brutality, but it doesn’t make a stink like a corrupt ref would.

There was an intro and a conclusion that I did not include which you can read by CLICKING HERE.

The reason I did not include it is that it takes on a naive accountability position, a position which I think does more to make things worse than to fix the problem. Because the problem itself is policing, and abolishing that institution is the only reasonable and tenable position. The system is not broken. The system is doing exactly what nature demands it must do.

Unlike the NFL, the players who are subject to the enforcement of rules are part of that system of their own voluntary consent. They are not extorted by the NFL to pay the referees, either. And most importantly those referees cannot kill the players or ruin their lives. The reason the state cannot operate with the same transparency as the NFL is because the NFL actually generates its own revenue, whereas the state relies on their armed, badged thugs to help them extort us to prop up a system which is not in our best interest.

The greatest complaint about professional sports that is valid is not the fault of the institutions themselves, but rather that they reinforce the idiotic ‘Us-vs-Them’ two-sided groupthink our society has become overly dependent upon. Most police supporters have little more in the way of reason to justify their support than some childishly deranged dichotomy. Good guys-vs- Bad guys. My team versus yours. You are either on my side or you are on their side. That is not the explicit message of team sports, but it is an implicit message that bleeds into every day thinking. This is not the fault of the sports themselves, but of a lifetime of conditioning in schools and media that trains us to take intellectual shortcuts in the form of nonsensical Aristotlean dualities. It is of no wonder that they place these teams sports at the front and center of both the schools and media, then, as a way of solidifying the conditioning to think in false dichotomies that they are constantly bombarding us with.

There is a way out.