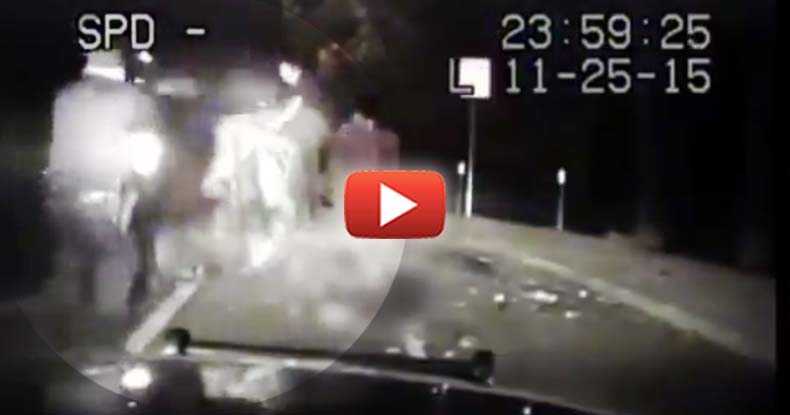 In December of 2015 I blogged three times about Patrick Feaster who shot and (eventually) killed Andrew Thomas after a DUI crash on Thanksgiving. To recap those blogs, Feaster was following a vehicle he witnessed drive from a tavern with its headlights off. Before Feaster can conduct the stop the car crashes into the median and wrecks. The passenger, Thomas’s wife, was ejected and died at the scene.

As if that wasn’t a horrific enough story Feaster, upon exiting his cruiser, draws his police issued sidearm from its holster and fires one round (according to the DA – though it seems like a double tap to me even still) at Thomas who was (somehow) able to crawl out of the wreckage. Upon being shot Thomas goes limp and falls back into the vehicle he was trying to escape. Feaster later claimed that the removal of his firearm, pointing and firing it was merely an accident. Even though the video shows him looking for shell casings and failing to inform other officers that arrive (including supervisors) that he had discharged his weapon. He didn’t even mention it when Thomas himself told another officer he had been shot. A statement the backup officer didn’t believe.

In the immediate aftermath, when it seemed that Thomas would live, Butte County District Attorney Mike Ramsey heavily defended Feaster’s ‘accident’ and decided to NOT press charges. Ramsey claimed that the video proved the shooting to be an accident and though it was negligent it was not criminal, without a fatality.

Sadly, that’s exactly what happened on December 19th when Andrew Thomas passed away from his gunshot wound to the neck. Since then though there hasn’t been any action from Ramsey that he alluded you to believe by his previous justifications for the shootings. Of course Feaster is still free to roam the streets and even take off if he wants since no official charges have been filed yet. It seems it might be a good time to jet too, considering CBS Sacramento is reporting that he was fired on Monday:

A Paradise police officer has been removed from the department and could face manslaughter charges months after dashcam video showed him shooting an unarmed man.

The unarmed man who was shot has died, and prosecutors say they may file charges against the officer.

I guess that’s a start. There should be comfort that a man who can draw a firearm, point it and discharge it at someone as an accident isn’t in a position to carry one of those each day. Yet, it’s pathetic that it took over two months to do it. Sure it’s probably because of stupid government (or union) paperwork, but that’s just another reason government services suck. If this was a private business, accident or not you would have lost your job that night. Instead of that he got support from the person who’s supposed to bring justice to the County.

Speaking of Ramsey, hopefully we’re all not sitting around waiting for him to find another loophole to let Feaster off the hook with. This was clearly a criminal act, and by that I mean negligent, baring a victim and of great bodily harm, that if any of us were the suspects of we’d be in a jail cell right now with a heavy bond. That shouldn’t change when you’re a killer cop with a badge.

What should change is the way policing is provided to the customers, YOU AND I! This good old boy buddy, buddy system that protects one another – even if just small favors – is ridiculous. It shouldn’t be tolerated and people need to start expressing that while demanding an alternative. We need to get some choices into our options of protection. Until then don’t expect too much of anything but the same old treatment… Feaster catches another break and ends up working elsewhere.