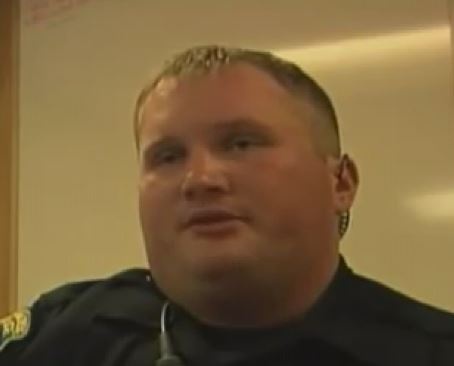 Last night I blogged about Patrick Feaster who was removed/relieved (department won’t comment as to which) from his job as a Paradise (CA) Police Officer. Even if the Department won’t comment, one can only assume this is the result of Feaster killing Andrew Thomas with a single gunshot to the neck. A shot Feaster claims was an accident but sure doesn’t look like a accident when you watch the video (see below).

Today Feaster turned himself over to the Butte County authorities where he had his first court hearing. According to KRCRtv.com:

Feaster appeared in Butte County Superior Court where he was charged with involuntary manslaughter. That charge, combined with the additional allegation of being armed with a firearm at the time, carry a maximum penalty of five years in county  jail.

Feaster is accused of shooting DUI suspect Andrew Thomas, 26, after a rollover crash in Paradise on November 26.

According Butte County District Attorney Mike Ramsey, the manslaughter charge was the culmination of several weeks of work involving legal and forensic experts engaged by the District Attorney’s Office while waiting for the Thomas autopsy.

Thomas was taken to Enloe Hospital with a single gunshot to his spine just below his neck, which nearly severed his spinal cord. Although he initially began to recover, medical records showed Thomas later developed septic shock, including pneumonia and kidney failure, during his stay at the hospital and he died three weeks later on December 19.

Ramsey noted the autopsy from the Sacramento County Coroner’s Office concluded Thomas’ death was as a result of complications from the gunshot wound to the spine and he had no other significant injuries from the collision which led to his death.

Feaster turned himself in to authorities Wednesday morning, and was released on his own recognizance. He is scheduled to return to court in two weeks.

It’s obvious that Feaster knew of the charges before this mornings public announcement and appearance in court. That’s why he came with an attorney, so, that’s double standard ONE right there. Do you think you or I would have gotten a heads up? Probably not, most likely we would have been awoken by a SWAT raid or a random visit by police. Nevertheless, it’s rare that people who have caused a death to someone else are allowed to appear on their own accord and not by police escort.

The second double standard highlighted is that Feaster was released on a personal recognizance bond. Brian and I were released on a $2,000 bond for chalking the police but a killer cop gets to walk out of court with a mere promise to return!?!? I thought justice was blind? What’s to stop Feaster from taking a trip to Mexico or Canada? Did Andrew Thomas’s family think a zero bond amount should be set? Under what pretense is this understandable or justified?

Lastly, and I’ll catch some shit for this by the CopSuckers, but INVOLUNTARY MANSLAUGHTER! Seriously! How about MURDER! Does the charge of murder require it to be intentional (which we all know it was, even if he wasn’t thinking, he shot that firearm)? It doesn’t seem so according to California Law (I bolded related language to Feaster’s actions) :

Under California law, there are three ways to be convicted of first-degree murder:

Examples of first-degree murder include (but are not limited to):

In order to prove that you are guilty of violating California’s murder law, the prosecutor must prove the following three facts (otherwise known as “elements of the offense”):

It seems that Feaster, IMO, could be charged with a degree of murder and that is more in line with his actions than INVOLUNTARY manslaughter. Clearly there’s a double standard being applied to his case and this treatment is clearly in his favor. How else can you call what you see on the video above involuntary!?!?

Mike Ramsey should be ashamed of himself. He must have forgotten that, “I have dedicated my career and the resources of my office to make sure that justice is done, no matter who the offender or victim may be” is quoted on his page of the Butte County website. So, it seems that it does matter and Ramsey is protecting one of the cities own – again.

What do you think? Should Feaster be in jail? Should a more severe charge replace the involuntary manslaughter? Let us know in the comments below.