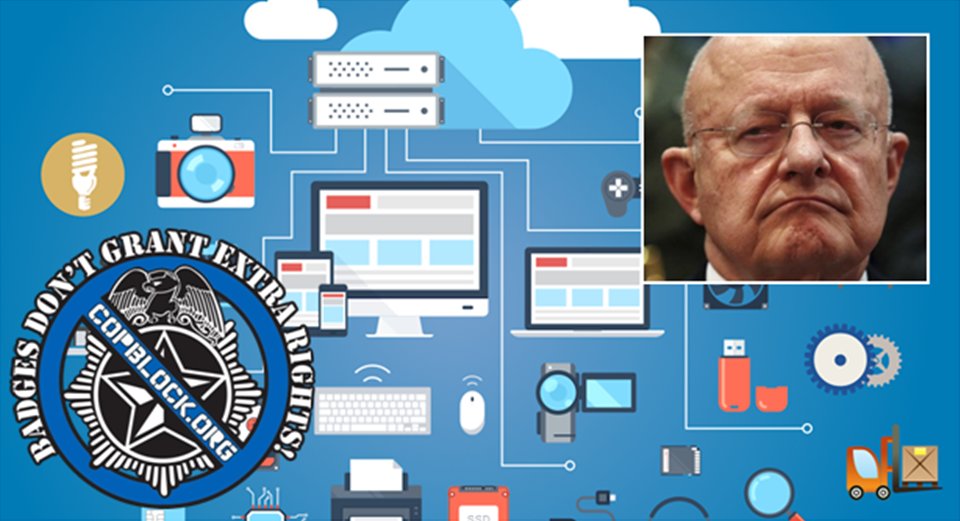 The U.S. director of national intelligence, James Clapper, has told lawmakers that intelligence agencies could soon use the “Internet of Things” to conduct covert surveillance on the population.

The Internet of Things refers to smart-devices which are embedded with electronics, software, sensors, and network connectivity, that enables them to collect and exchange data and to be sensed and controlled remotely across existing network infrastructure – thus creating opportunities for more direct integration of the physical world into computer-based systems.

This encompasses technologies such as smart grids, smart homes, intelligent transportation and smart cities. Experts estimate that the internet of things will consist of almost 50 billion objects by 2020, meaning that an integrated electronic apparatus that can be easily exploited by intelligence agencies is already upon us.

Its hard to imagine that these systems aren’t already being utilized by various government snoops, but Clapper told the Senate armed services committee and an intelligence panel on Tuesday that, “In the future, intelligence services might use the [Internet of Things] for identification, surveillance, monitoring, location tracking, and targeting for recruitment, or to gain access to networks or user credentials.”

Clapper did not pinpoint any intelligence agency as being directly involved in smart-home-device surveillance, but security experts almost entirely agree that it is just a matter of time until surveillance services intercept signals from the newly networked devices, just as they do with cellphones.

Again, this is most likely already happening, but Clapper’s statements embody the first steps of a slow-drip roll-out of more and more invasive spying measures meant to acclimate the public to the reality that they have no privacy in the face of the omnipotent modern state.

The comments came during the Obama Administration’s unveiling of it’s new cybersecurity initiative, which has tasked the Department of Homeland Security to increase the security of, and “test and certify networked devices within the ‘Internet of Things.'”

Clapper’s admission about the surveillance potential for smart-home devices is rare but not unprecedented. In a 2012 speech, CIA director David Petraeus called the surveillance implications of the Internet of Things “transformational… particularly to their effect on clandestine tradecraft.”

During Tuesday’s testimony, Clapper cited Russia, China, Iran, North Korea and the Islamic State as upgrading their online espionage, disinformation, theft, propaganda and data-destruction capabilities as the reason for necessarily increasing cyber-security powers, but in light of recent events in Burns, Oregon, the U.S. government has made it clear that legal changes are needed to combat so-called home-grown “anti-government extremists.”

Connected household devices represent low-hanging fruit to intelligence agencies seeking ways to spy on us. In February 2015, it was revealed that microphones on Samsung smart-televisions were “always on,” and that millions of people were being spied on by Microsoft’s voice-activated Xbox games consoles.

According to a study that Harvard’s Berkman Center for Internet and Society released last week, “Law enforcement or intelligence agencies may start to seek orders compelling Samsung, Google, Mattel, Nest or vendors of other networked devices to push an update or flip a digital switch to intercept the ambient communications of a target.”

“Appliances and products ranging from televisions and toasters to bed sheets, light bulbs, cameras, toothbrushes, door locks, cars, watches and other wearables are being packed with sensors and wireless connectivity,” the study adds. “The audio and video sensors on [Internet of Things] devices will open up numerous avenues for government actors to demand access to real-time and recorded communications.”