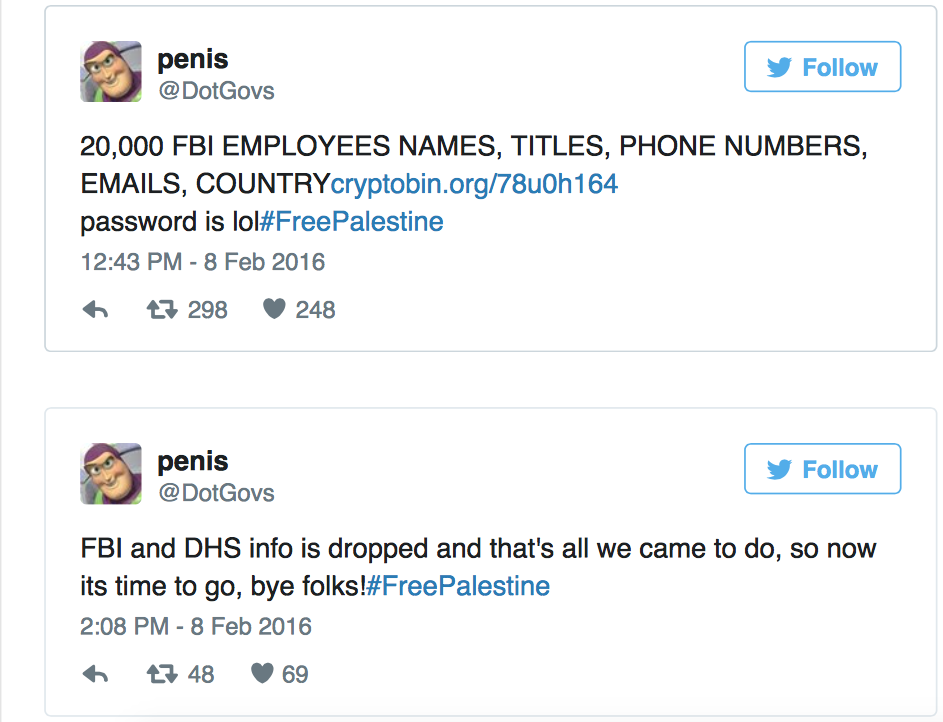 After releasing stolen records of 9000 employee from Department of Homeland Security, the hacker who goes by the Twitter handle of @DotGovs today leaked contact information of 20000 FBI employees.

The hacker had promised yesterday that he would be leaking FBI employee details and today the hacker made good the promise by publishing contact information for 20,000 FBI employees on Cryptobin.

The hacker, tweeted from the account @DotGovs, claim the details were stolen by hacking into a Department of Justice database.

The Justice Department is investigating the hack. Department spokesman Peter Carr told CNN it does not appear there was a breach of private personnel information, such as Social Security numbers.

“The department is looking into the unauthorized access of a system operated by one of its components containing employee contact information,” said Carr. “This unauthorized access is still under investigation; however, there is no indication at this time that there is any breach of sensitive personally identifiable information. The department takes this very seriously and is continuing to deploy protection and defensive measures to safeguard information. Any activity that is determined to be criminal in nature will be referred to law enforcement for investigation.”

The hackers taunted federal officials, tweeting, “When will the US government realize we won’t stop until they cut relations with Israel.”

According to the official Penis twitter page the cryptobin website is down following the release of the employee information.

On February 8, 2016 Penis tweeted a triumphant “I think the government can hear #FreePalestine now Hahhaha”

The twitter page of the hacker has been blowing up with retweeted links of his mischief. Unfortunately I was unable to find one that would open for me.

It appears the leak was a group effort and London hacker Vinnie Omari has been accused of being the leader. Omari has neither confirmed or denied his part in the leak saying, “I don’t have to clear myself of nothing”.