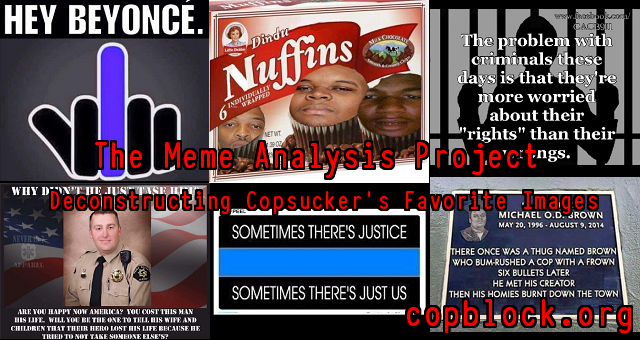 To say that I do not like memes would be misleading. It has nothing to do with how I feel about memes, and everything to do with the fact that they are a contributing factor to the mounting Idiocracy. I have written extensively on the subject. Here at CopBlock I recently wrote a piece about an exploitation photo that became a popular copsucker meme. Last year I wrote about another meme that went viral and gave it a full analysis. One of my issues with memes is that the information you see is just the tip of the iceberg; most of its mass lies beneath the surface where almost nobody ever investigates. I have explored whether memes are an act of aggression and even written a humorous mashup story between The Borg and Idiocracy to relate my concerns. But one of my most successful pieces in relating the troubling issues in these bacteria-like images was to perform a specific meme analysis on several examples. So effective was it at showing the implicit messages in viral macro images, that I have decided to treat cocksuckers to a deconstruction of their favorite memes.

As a side note, I have listened to and seriously considered the critiques of using the term ‘copsuckers’ and I find some truth and value in the idea. That term, like memes, does carry implicit messages that should be more closely examined. Yet I have been unable to come up with a good enough replacement, with ‘SyCOPhant’ being the closest I have gotten. Please share your suggestions here. Since the recent Superbowl dust-up is still fresh in everyone’s playbook, this is as good a place as any to start. There really isn’t too much complexity here. It’s explicit message reads:

Do you think it is the same people who complain about police activists lumping all police together who are making images like these that patronizingly speak for all individual police officers? I can almost guarantee that it is. Do you suppose that it is true, though? Do you suppose that every single police officer in America is upset with Beyonce for her SuperBowl performance and the circumstances surrounding it?

Well, the circumstances they are upset about is that the sacred laws the cops uphold are the same ones that forced Beyonce to attain their protection services regardless of her will. Which meant that a bunch of cops got paid to accompany a gorgeous pop star to the premiere sporting event of the year. You will pardon me if I do not lose too much sleep over that cruel misjustice. The poor dears!

Beyonce’s performance itself was a statement protesting the fact that black Americans are far more likely to become targets for police harassment, abuse and brutality; as well as other institutional mistreatment and discrepancies. Am I to believe that every single cop in America is so racist that they would be angered by creative use free speech to make a statement about the racism inherent in our public institutions? I sure as hell hope not. And I do not believe it. Even though there is no such thing as a ‘good cop’, there are good individuals who get misled and one day find themselves stewing in the bottom of a badge. I am sure there are plenty of LEO’s of all skin tones and cultural varieties that agree, or at least empathize, with Beyonce. It is a shame that their voices are covered up by the fanatics who go out of their way to show their support of police via absolutist hyperbole, while abandoning their morality, common sense, human decency and good taste. If you put this quote in a game of, “Who said it, a movie gangster or the police?” I would not be able to decide. The mentality that the group identity of individuals is more important than the values, ethics and morals that the individuals in those groups subscribe to and espouse as their own is the mentality of every group of thugs throughout history. Only those who sell themselves out as an individual in lieu of a group identity would ever believe that it was okay to abandon ones scruples any time someone in their gang was in trouble.

This, too, speaks of the hypocrisy of those who insist we treat police as individuals. They do not even treat themselves that way. They treat themselves as members of an exclusive team who harbor delusions of superiority over everyone else. How is anybody supposed to believe that a group who believes their lives are more important than anyone else’s would have any responsibility or interest in protecting the public that they place themselves above? Cops and their syCOPhantic supporters are not even pretending that police are here for anybody but themselves anymore, and that is frightening! Before you become a police officer you should have a talk with your family, like the one below. If you are unwilling to do live with this as truth, then please go back to DeVry or whatever fast food university you came from and pick a new career path.

Dear Family,
I have chosen a career as a police officer because I firmly believe in protecting every single member of our community. My love for my fellow humans and for this place is such that I would gladly lay down my own life to protect any one of these people. And I will never kill one of these people in order to save my own hide, but only to protect other community members from violence when I am certain the danger exists and there is absolutely no other option. My life is no more important than anyone else’s and neither is yours. While I am far less likely to die than people working in almost twenty more dangerous careers, it does remain a distinct possibility. No matter what happens, I want you to be proud of me for sticking to my ideas until the end. If I die in the service of my fellow humans, then it will be an honorable death, and the end of a life worth living. Because that is what gives our lives value- our ideas, our morals, our values, and the courage and determination to stand by them in the face of any danger. If I ever forget that, then please remind me, because going out there every day with such tremendous power is a responsibility that should not be tasked to the faint of heart or weak of will.

If that is not how you feel, if you feel that your life is more important than your values, then you have no business as a public servant. If you and your fellow gangsters are the most important people you serve, you are a cowardly thug. Life is not measured in time, but in what we do with it. Preserving your life at the cost of your values erodes your own integrity, pride and honor; and drags the world that is stuck with you down with it. Did you know that Michael Brown has a family? Crazy, huh? Can you imagine if you lost a family member and then some creepy assholes were celebrating their death publicly, while mocking and slandering them? What does it mean that the only dead people a large portion of the general public are okay with doing that to are the ones killed by police? What would you think of cab drivers if every time they got in an accident and killed a passenger, other cab drivers and their supporters immediately took to the internet to berate and belittle the dead?

I just spent about 75 years researching the laws which say that ‘bum-rushing with a frown’ is a crime punishable by instant death, and I still cannot find even a single reference to it. Please advise.

Also, what is this ‘his homies’ stuff about? Are they just mocking black culture by imitating its linguistic patterns? Do they really believe that everybody who showed up to protest and riot knew Michael Brown and were his homey? “Well, they all look alike to me, so they must all know each other,” is pretty classic racist logic. And if you love racist logic, you are going to love this next meme. There it is again. The mocking of cultural dialect. The co-opting of speech patterns as a way of belittling those who employ them genuinely. The pretentious, sneering derision of this behavior cannot be construed as anything but obvious racism. And if you aren’t beginning to see a pattern here, let me help. At least half of the memes you see police and their syCOPhants posting are blatantly racist. If they are not racist, then they tend to suggest some other sort of superiority/inferiority. At the very least they prop up support for ideas and an institution that is predicated on systematic inequality at every level.

Other than the obvious racism, the meme goes on to suggest, yet again, that police have the right to kill you for any perceived offense. Morally and legally. With this sort of precedence, where does it end? How long before police departments have snipers set up in downtown areas to take out jaywalkers? Our legal system lays out some pretty clear boundaries for when you are allowed to sentence someone to death on the spot. Which sounds nice until you realize that the people enforcing those laws are not subject to them. Which really just means that policing exists as a haven for criminal behaviors with protection against legal consequences. Which is worse, no cops whatsoever, or giving the worst people in our society a protective apparatus to engage in violent criminal behaviors with no consequences? Because that is what cops is, kids. Hey, who else remembers the good ol’ days when criminals were -more worried about their “rights” than their wrongs-? Ah, the salad days of criminal remorse, however can we recapture thee? That is such a stupid assertion that I must assume that whoever wrote it did so after an afternoon of munching on a bag of lead paint chips while watching Andy Griffith sitcoms.

I guess it does kinda make sense, though, when you consider all of the criminal cops who were prosecuted for crimes and then just sat back and took whatever they had coming and wallowed in their remorse, absent any concern for their own well-being.

Now maybe you missed it, but that meme also put quotation marks around “rights”. To be honest, I don’t believe that the concept of rights is valid or meaningful. But for people who support police and the state, rights are the only reason those institutions exist. Without them, there is no valid argument for them. So if they are belittling human rights, why are they still supporting a system based on them? Or is it just that they believe people suspected or accused of a crime should not have any rights? Rights are unconditional, that is what makes them different from privileges. So is this meme suggesting that rights are actually privileges? Do we have to earn our privileges from our owners/masters by meeting the conditions they lay out for granting them? There is a word for that sort of thing…oh, what was it again? Oh, yeah, right. Slavery.

Well that is all for now, folks. I hope you enjoyed this exercise in meme analysis, and that you learned that a meme is not just a silly picture, but an intellectual gun loaded with a massive amount of bullets you cannot see until it is aimed right at you. If you want to submit more syCOPhant memes for future analysis, you can do so here.