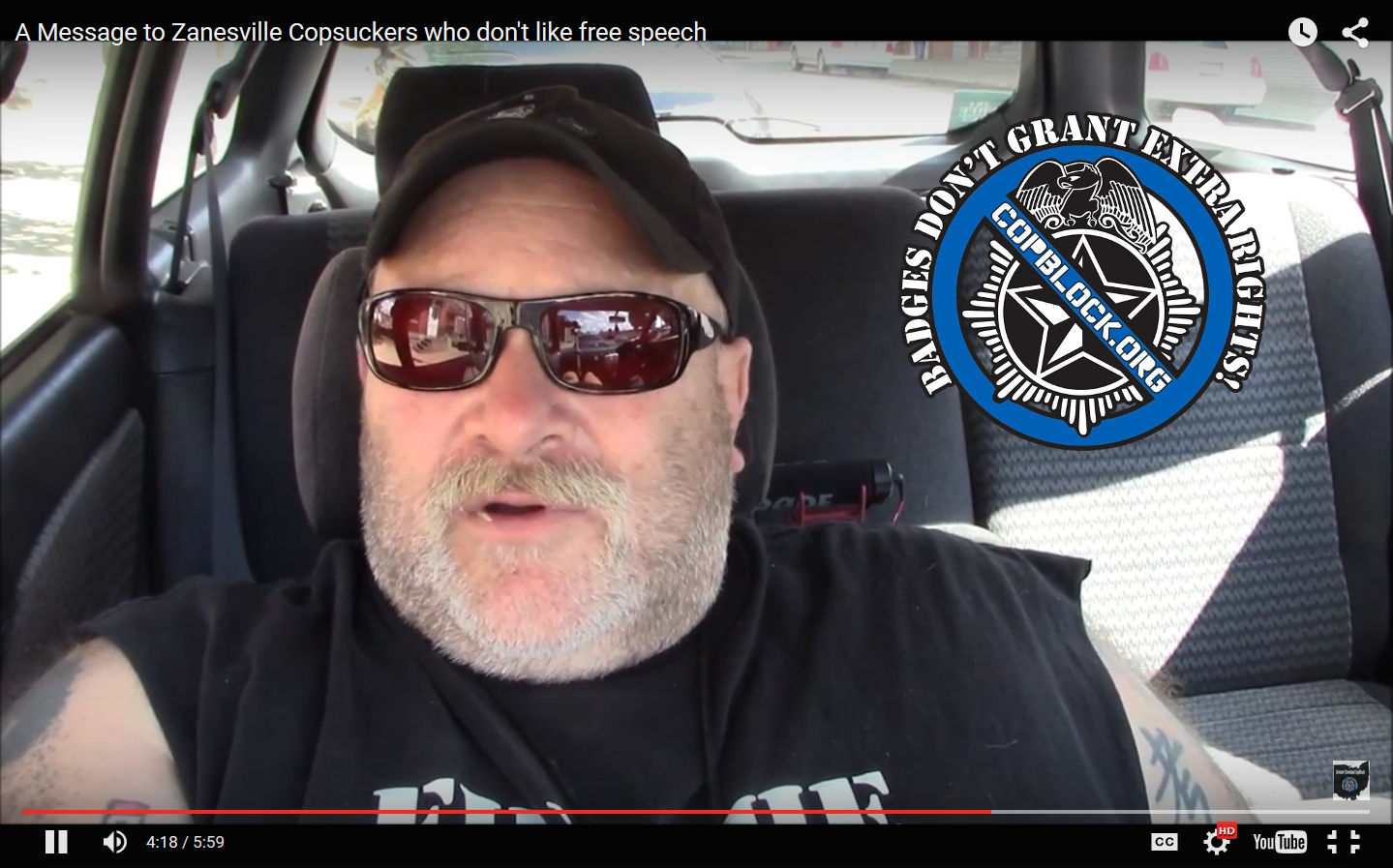 UPDATE: On May 10th, 2016 Deo Odolecki was granted an appellate bond from the Appeals Court. When this request was first made by Odolecki’s attorney, John Gold, the court denied the request without reason. Therefore, Gold and associates filed paperwork with the Ohio Supreme Court who ruled that the Appellate Court must reconsider Odolecki’s bond.

Thanks to that hard work the court ordered that Odolecki be free on $10,000 cash or 10% with a bondsman. Nearly 40 people chipped in to raise the $1,000 for the bond. After 92 days, nearly all of them spent alone in confinement, Odolecki was finally released and taken home.

Gold and his associates are still progressing the case through the Appeals Court but don’t expect a decision on that until the end of the year at the earliest. Until then Odolecki will continue to manage the CopBlock.org Store, assist behind the scenes of the CopBlock Network and enjoy being free(r) with his wife and two dogs.

I’ll continue to update this story as the appeals process plays out. Again, a special thanks goes out to all of those who donated.

Deo Odolecki, founder of Greater Cleveland CopBlock, host of CopBlock Radio and CounterCurrent News editor, was on trial the last two days at the Parma (OH) Justice Center regarding two cases where he was arrested while CopBlocking (also known as filming the police). Both cases involved First Amendment rights (like protesting unconstitutional government actions and filming the police) but instead of upholding those rights, Judge Deanna O’Donnell denied them when she sentenced him to 240 days in jail. Before discussing how Odolecki was railroaded let’s take a look at the cases that brought him to court.

The first case stems from a June 13th, 2014 (yes, over 1.5 years ago) interaction where Odolecki was “CopBlocking” a checkpoint in Parma (read the original post here). Odolecki was at the last intersection before the police checkpoint with a sign warning drivers about the upcoming police restrictions, or trap, on free travel. Parma Police officer, James Manzo, approached Odolecki and stated that informing motorist to “turn now” was obstructing police business. Of course Odolecki disagreed and refused to stop warning drivers of the checkpoint. For his refusal he was issued a charge of obstructing justice and the police confiscated his sign.

Below is the video of that arrest.

The second arrest was on July 29th, 2015 when Odolecki stumbled across several Parma Police officers at an intersection while on his way home. Curious as to what so many police officers were up too, he started to record. Once Odolecki crossed the street, and officers noticed his presence, he was verbally and physically attacked by them. Even though Odolecki complied with their commands – sure after a few choice words – to leave the immediate area they still choose to arrest him and charge him with disorderly conduct, obstruction of justice and interfering with a medical emergency.

Below is the video of that arrest.

These two interactions left Odolecki facing 240 days in jail for merely filming the police. 90 days for both obstruction charges and 60 days for the disorderly and interfering charges. Let me say that again, 240 days of jail time. Even though, in both cases, Odolecki never approached police – though it might seem like that on the second interaction it’s not the case because Odolecki would have had to cross that intersection to return home anyways – and wasn’t obnoxious until police starting verbally and physically attacking him. Most people who watch these videos would agree that Odolecki’s actions shouldn’t require 240 days in jail.

Yet, that’s exactly what happened at the conclusion of the three day trial this afternoon. From the start of it the cards were stacked against Odolecki. The state was granted a pretrial motion to removed his [Odolecki’s] mentions of Parma police misconduct that was stated in his videos. The judge granted this because it wasn’t related to the case at hand but in reality it was. If the police weren’t violating people’s rights (which leads to lawsuits) Odolecki wouldn’t be out filming them. Also the state was allowed to show a DVD to the jury that they made showing snippets of Odolecki’s CopBlocking. Even though those clips weren’t taken on either day he was arrested but from other times out CopBlocking.

Furthermore, the state called the mother of the kid who had attempted suicide as a witness and she kept on about her poor, mentally ill son. Another fact that had nothing to do with the allegations against Odolecki but were more about sympathy for the police and their job that day. All of this, and more, despite the statements by judge O’Donnell that she wouldn’t allow facts outside the scope of the charges to be heard in her courtroom.

To be fair, those weren’t the first signs that O’Donnell had a tidbit of hypocrisy in her. Odolecki’s case hinged on a freedom of speech aspect and that was the issue to be decided in court. Yet, I was removed from the proceedings for ‘making a face’ and  snapping a picture from the empty Justice Center hallway. That’s when I was told that if I took any pictures or video I would be removed from the building. So while Odolecki and his legal team were inside hoping O’Donnell would uphold freedom of speech, she was oppressing it in the hallway just outside the courtroom.

O’Donnell drove the nail home when she not only remanded Odolecki to custody immediately, instead of staying free pending his appeal (which is common),  but also ordered his sentences to be served consecutively and not concurrently. That means Odolecki will have to sit the total balance of each charge before starting on the balance of the next charge. Where concurrently means that each day in jail is one day towards each of your charges. This means that if run concurrently Odolecki would be home in two month, now, under the consecutive sentences, it could be six month.

This brings me to ask. . . How can a building with the name Justice Center explain locking a man up for holding a sign? For filming cops who were in public space and did a poor job at explaining the situation (Odolecki had no idea it was a minor and a suicide attempt and might have just left if he hadn’t been barked at first)? How can O’Donnell go home and feel as if justice was served? Odolecki has been out awaiting his day in court for over 1.5 years on the first charge, so clearly his crimes didn’t warrant him being in a jail cell immediately.

We also know that jails weren’t built for people who hold signs and video cameras. If you believe they were then you’re part of the problem because I know I wouldn’t give my money up for such ridiculous reasons.

Odolecki’s attorney, John Gold, stated that an appeal will follow and he’ll be seeking all legal remedies to get his client out from behind bars. Until then you can call or write the Justice Parma Center (attention: Judge Deanna O’Donnell) asking to reduce the sentence; at a minimum to concurrent (ran together) as opposed to consecutive.

I will update this post with mailing address and additional information for Deo Odolecki when we get it.