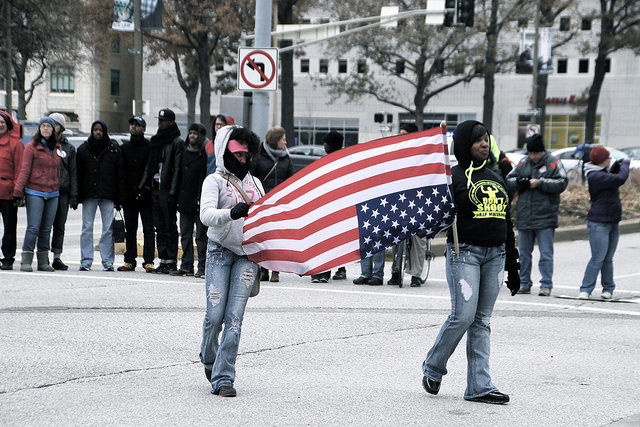 (ANTIMEDIA) — In response to Ferguson City Council requesting amendments to a consent decree, the Department of Justice (DOJ) announced Wednesday that it will “aggressively” prosecute a civil rights lawsuit against the city. Attorney General Loretta Lynch stated that the lawsuit alleges a pattern and practice of unconstitutional police conduct.

“The residents of Ferguson have suffered the deprivation of their Constitutional rights, the rights guaranteed to all Americans, for decades. They have waited decades for justice,” Lynch said. “They should not be forced to wait any longer.”

The DOJ lawsuit comes as a result of the Ferguson City Council unanimously rejecting seven provisions in a federal decree that came in the wake of Officer Darren Wilson shooting and killing 18-year-old Michael Brown in August of 2014. Wilson was not indicted in that case, though the DOJ contends this is part of a pattern of police misconduct in the city.

After seven months of negotiation and four reports documenting police and court abuses, the Justice Department intended the consent decree to address long-standing grievances Ferguson citizens have expressed toward their city’s law enforcement. The 131-page document proposed massive reforms, mandating that officers record all on-duty action with body cams and prohibiting them from using force on “restrained individuals.” The agreement also proposed a crackdown on revenue generating schemes, or what some call “policing for profit,” which apparently is rampant in Ferguson.

However, with their amendment requests the City Council effectively voted against the agreement. Specifically, the Council rejected salary and staffing requirements and proposed a $1 million cap on paying for federal monitors.

“If you think about what the Department of Justice is asking them to do, it’s really embarrassing that there would be any hesitation. It’s embarrassing [that] they had to spend this much time talking about this. At its core, they’re saying ‘Don’t target poor people and black people for arrest, in order to raise revenue. And when poor people are jailed, don’t extort money from them.’ These are some of the most fundamental legal principles in our country, and we spent nearly a year arguing about that.”

Vanita Gupta, head of the agency’s Civil Rights Division, says the amendments were an attempt by the Council to delay the Justice Department’s reforms. Now they will have to showcase their city’s history of corrupt and unconstitutional law enforcement in a federal court.

This article (Justice Department Files Civil Rights Lawsuit Against the City of Ferguson) is free and open source. You have permission to republish this article under a Creative Commons license with attribution to Jake Andersonand theAntiMedia.org. Anti-Media Radio airs weeknights at 11pm Eastern/8pm Pacific. If you spot a typo, email edits@theantimedia.org.