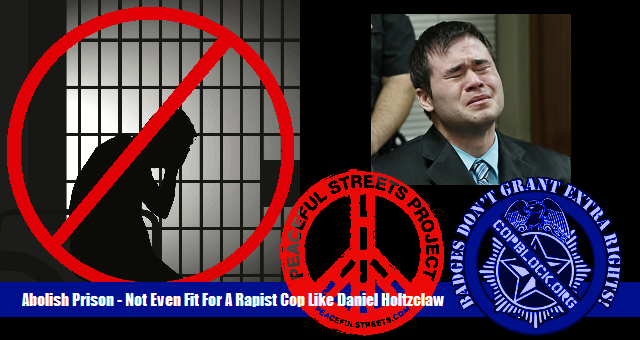 The following article was originally written and published by Peaceful Streets Project. It is a superb reflection on the hopelessness, danger and (sometimes) hypocrisy of police accountability, as well as a reasoned examination of why we must abolish prisons and police.

The Peaceful Streets Project had long ago given up on trying to appeal to or appease the sensibilities of the average tough-on-crime, law and order, police-loving American. We toyed with the idea of appealing to the average person so that we didn’t offend or turn off large segments of society in our attempts to bring an end to institutional violence. But over the past several years it has become more than apparent that the average American is irrelevant to our efforts. Not because we would not appreciate their support, but because their support cannot efficiently be won, and because it adds little to nothing to our efforts.

We live in a society that appreciates order, even if that order is oppressive and destroys the lives of millions. Our society is no different than any society that has preceded it. While there have been tiny flashes of revolution and progress over the centuries or millennia, even in those limited remarkable moments in time, the general populace has most often wanted to moderate the efforts of the tiny number of revolutionaries to limit the change so that daily life would not be disrupted too much.

Today, we see the pathetic racists and classists who support the police. These people claim that there is a “war on police” and that “Blue Lives Matter.” They reflexively defend cops who are caught murdering or raping people, while slandering their victims. And when we point out or mimic their hypocrisy, they whine and cry about how cold-hearted we are. These people are the obvious enemy of a freer society wherein terrorists could no longer pose as peace officers. However, another enemy of bringing an end to the police state are the many who believe they are advocates of progress and change. These are the “reformists.” The people who believe that we can alter the current system of tyranny and oppression that has destroyed or significantly harmed the lives of scores of millions of Americans by simply changing the incentives or policies of police, prosecutors, and politicians. They think they are helping, and many have wonderful intentions, but in reality, they are impediments to change.

The current system of policing was built to oppress and marginalize the marginalized and oppressed. It was built to murder indigenous peoples, to enslave and kill black people, and to crush labor movements. Trying to turn this system of policing into something that is socially beneficial is akin to what would have happened if the Nazis won World War II and people tried to argue that they later needed to simply alter the mission of the Schutzstaffel or SS so that they could promote peace in a more progressive society. Systems of oppression should be abolished, not reformed. This is why we advocate for the abolition of prison.

Prisons perpetuate injustice and they create more victims than they help. The overwhelming majority of people in prisons are there despite not having harmed anyone, or they have previously been victims themselves. When they are taken away from their friends, families, and communities, they are further traumatized and become more likely to harm others in the future (either inside or outside of prison). And when they are incarcerated, the friends, families, and communities they leave behind are being punished despite not being responsible for the alleged crimes that the incarcerated were imprisoned over.

And aside from a sense of vengeance from a hateful populace who wants to see people they typically do not know punished for going against the social order, prisons do not benefit society in any appreciable way. The victims of crime rarely receive “justice” by having their perpetrators thrown in a cage. Prisons do not help make the victims whole. They do not reimburse the victims for their ordeals. They also do not provide the victims with trauma counseling. Prisons do not undo assaults, burglaries, rapes, or murders. All they do is take an alleged victimizer (or law breaker) off the streets and create more victims out of the people who care about the victimizer.

CLICK HERE to continue reading- We Can Say Screw Daniel Holtzclaw and Still Advocate Abolishing Prison: To End the Police State We Must #AbolishPrison