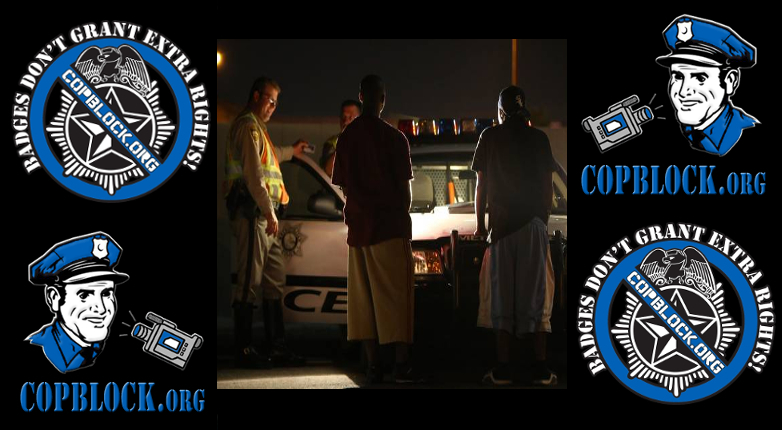 (Note: This post was written by Kelly W. Patterson and originally published at the Nevada Cop Block website. It can be found here. It was shared with the CopBlock Network, via the CopBlock.org Submissions Page.)

Recently, Sheriff Doug Gillespie made an announcement that, due to budget shortfalls, Las Vegas police would be forced to shift 26 cops from the D.A.R.E program and one of four “saturation teams” back to patrol duty. This along with hiring freezes instituted earlier in the year, was of course couched in terms of Las Vegas area residents becoming less safe, as a result:

“Sheriff Doug Gillespie’s face was grim as he described the largest budget shortfall yet facing Metro Police: an estimated $46.5 million deficit for 2013…

‘Should the community be concerned,” Gillespie said in a Metro video. “Yes. They

Deputy Chief Kevin McMahill said in a Metro video he’s worried about the demands placed on remaining officers and the community.

‘Will it be less safe? That’s a tough thing for me to sit and say to you,’ McMahill said. ‘The truth is probably…'”

And not surprisingly, either, the affected programs are characterized as essential crime prevention tools that should take priority over everything else:

“They’re cops dedicated to preventing crime in the valley.

“I think it’s one of the few ways we could keep kids off drugs. It’s bothersome to me and bothersome to the community,” he (Las Vegas Police Union head Chris Collins) said.

But the cuts will continue until Las Vegas and Clark County, which fund about 70 percent of the Metropolitan Police Department’s budget, figure out their priorities, he said.

“You still see city and county parks are being built. Why are you building parks but not funding the Police Department to the level it needs to keep citizens safe?” he asked.

All this teeth gnashing and hand wringing over being unable to fund cops and stuff that the community actually benefits from kinda explains why the city recently implemented what amounts to a protection racket style extortion scheme against local artists participating in First Fridays a few months back.

However, reality tells a very different story in regards to both of these programs.

The so-called “saturation teams,” which were conceived and implemented by Metro Capt. Jim Dixon and Gillespie (prior to him becoming the sheriff) back in 2005, are actually glorified harassment squads that descend upon designated areas looking for any excuse to stop, search, and arrest the people within those neighborhoods.

“They use whatever laws are at their disposal: jaywalking, riding a bicycle without reflectors, outstanding warrants. They work together, swarming “hot spots” around the valley…

‘We’re like wolves,” officer Justin Gauker says. “We travel in a pack.'”

Those of us that are familiar with the way these wolves usually hunt aren’t exactly shocked by the selective nature of their prey or even how brazen they are when discussing it:

Sat team officers have to make constant judgment calls. They won’t pull over and arrest someone in Summerlin (a more affluent, predominantly white section of Vegas), for example, who doesn’t have bike reflectors…

I wouldn’t exactly disagree that “old-school policing” often included a lot of swarming through minority and poor neighborhoods rousting anyone that they arbitrarily decide “is up to something” or “doesn’t belong there.” However, the professionalism of punishing everyone who lives in a certain location for the actions of a small segment of that location’s residents is a little more subjective. Also, it’s no secret that police stop minorities more often, look harder for an excuse to search them once stopped, and are much more likely to make an arrest if something is found. There is a reason that “old schools” get closed down. Usually they provide really shitty educations.

DARE: A History of Failure and Community Destruction

Meanwhile, the Drug Abuse Resistance Education (DARE) program is actually an overly expensive program that has consistently been found to be ineffective and even potentially counter-productive. DARE programs really are nothing more than a product of police desire to justify increased funding, allow access to children for propaganda and informant recruitment purposes, and even convince them to turn their own parents in for minor, victimless drug “crimes.”

“DARE is costly and ineffective. It wastes educational and police resources. The link between schools and drug police has become a sacred cow that leads to a false sense of security, despite clear evidence that DARE is a failure. Since its curriculum went national, two patterns have emerged: more students now do drugs, and they start using drugs at an earlier age…

DARE has a hidden agenda. DARE is more than just a thinly veiled public relations device for the police department. It is a propaganda tool that indoctrinates children in the politics of the Drug War, and a hidden lobbying strategy to increase police budgets.”

Even the psychologists that created the basis for the model DARE uses have since denounced it as “misguided and outdated.”

“DARE is rooted in trash psychology,” Colson told me two years ago. “We developed the theories that DARE was founded on, and we were wrong. Even Abe Maslow wrote about these theories being wrong before he died.”

The Economy isn’t the Only Reason Metro is Over Budget

At the root of all this is the basic question of why Metro is over budget in the first place. The economic downturn that has hit Las Vegas especially hard certainly plays a part in it, although the reserve fund area police accumulated during the good times has been able to offset that up until this year. The real reason that local police departments’ funds are running dry is because they spent the past few years throwing cash around like a drunken sailor on shore leave.

Local governments throughout Southern Nevada decided to disregard the economic crash that everyone else in the world saw coming and go on a spending spree beginning in 2009. The city of Las Vegas, which is responsible for 40% of Metro’s budget, spent $146 million building a new city hall building that they couldn’t afford to staff five days a week anymore by the time of its opening.

North Las Vegas, which flirted with bankruptcy last year prior to taking advantage of a loophole that allowed them to declare a state of emergency in order to circumvent mandated spending requirements and also has been threatened with a takeover by state overseers, spent $130 million on their own fancy new city hall.

Not to be outdone, LVMPD decided that they needed to have a “place of their own” after getting by all these years using space within the old city hall building and rented spaces throughout different areas of town. Instead of joining in on the move to the new city hall or taking over an existing government owned property (including the old city hall), they began construction on a brand new 370,000 square-foot complex.

While the construction costs seems to be a better kept secret than the location of the Holy Grail, it’s been widely reported that they are paying over $12.5 million per year, plus an annual increase of 2%, on top of that to lease the land the new headquarters was built on from a private real estate company.

All of this spending is usually explained away by the fact that they were planned back during the “good times,” even though everyone of them actually received their final approval late in 2009, well after the recession had already begun. The other go-to justification was (as is often the case for these sort of things) job creation, which in reality has amounted to nothing but temporary construction jobs during the building phase.

In fact, the expenditures from that construction has actually eliminated permanent jobs. As mentioned, the Las Vegas city hall is now only open four days a week. North Las Vegas has not only laid off public workers (including cops and firemen), but has also closed down it’s jail and has been rumored to have made unsuccessful ovatures to merge their entire police force with the Las Vegas Metropolitan Police Department. Sheriff Gillespie has up until now been able to stave off large scale layoffs at Metro by not replacing retiring officers, drawing off the once large reserve funds, and doing a bit of creative math to shift expenses around.

Las Vegas Police Shooting Themselves in the Foot

Another factor that has become a negative draw on Metro’s budget has been their tendency to beat, kill, and otherwise abuse people around the valley including completely innocent people and people they just don’t feel like chasing. The 150+ settlements that Las Vegas area police have paid out over the last five years alone (plus another $20 million lawsuit already in the pipeline) come out of that reserve fund and, of course, your pocket. Between the $6.5 million in direct cash paid out and all the salaries being paid to cops sitting home on paid vacation while their friends in the department figure out a way to exonerate them, a lot of Metro’s personnel woes could be alleviated if they just started asking a few questions before shooting or at least afterwards.

The propensity that cops in and around Las Vegas have for brutalizing its inhabitants has both monetary and physical consequences. Since local taxpayers foot the bill for these settlements and most of the offending officers are still on the payroll, these budget cuts are actually one of the few times that local cops have in any way felt repercussions for instances of police brutality.

Unfortunately, it’s not the actual cops responsible for these transgressions that will suffer, but rather it will be new (as of yet) untainted recruits that won’t be hired as a result. However, on the upside, there will be one less saturation team available to harass and abuse people that can’t afford to live in Summerlin.

And that’s a good start…