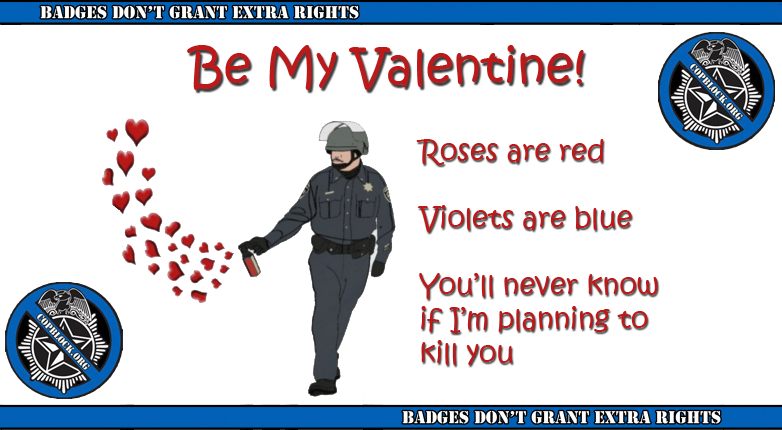 Just in time for Valentine’s Day, several articles that crossed my Facebook feed this week drew my attention to the women who “walk the line” by being in relationships with law enforcement officers. Indeed, there’s almost as much copaganda pertaining to cops’ wives and girlfriends as there is about cop themselves. Women who date and marry police officers seem to view themselves as a breed apart from other women, boastfully basking in the reflected glory of men who dress up in magic costumes that allow them to steal, rape, kidnap, and kill with impunity.

“Ride or die” cop chicks want the world to know the undying loyalty they have for their romantic partners, but do they receive the same loyalty in return?

Perhaps products like the ones above are just mass-marketed bravado designed and purchased by police wives to convince themselves they really want to be in the law enforcement marriages that most of them will end up leaving. Law Enforcement Today reports:

“We all know that the divorce rate for the nation sits right at about 50%, but did you know that the rate for officers is 60-75%? Staggering numbers when you really consider it. Approximately one quarter of the officers who are married will still be married to that same spouse at the end of their careers. One quarter.”

Alcohol abuse, frequently toxic for relationships of all kinds, is a common issue amongst police officers. From Police Chief Magazine:

Law enforcement officers drink in greater quantities and have higher rates of binge drinking compared to non-officers. This drinking is not always off the job—25 percent of officers report having consumed alcohol while on duty.

It’s not just the stresses of the job and the tendency of police officers to cope through alcoholism (and other means), that contribute to their higher rates of divorce; Some experts say the personality traits of cops don’t make for good marriages to begin with.  A marriage therapist writing for PoliceOne disputes that law enforcement officers experience higher divorce rates, but still admits the following:

In The Seven Principles for Making Marriage Work, John Gottman (another guy with solid research to back up his opinions) writes, “Statistically speaking, when a man is not willing to share power, there is an 81 percent chance that his marriage will self-destruct.”

As a marriage therapist, I can say the police personality (cynical and controlling) and the nature of our job (my way or the highway) are not compatible with egalitarian marriages.

While not specifically addressing law enforcement marriages, a Daily Beast article on predictors of divorce warns:

If you’re a man with high basal testosterone, you’re 43 percent more likely to get divorced than men with low testosterone levels.

“This is something that evolutionary psychologists and everyday people should take account of,” says Coontz. “Hypermasculinity is neither an evolutionary benefit nor an adaptive trait, especially nowadays, when the best predictor of a successful marriage is not the specialization into two separate roles”—stereotypically male and stereotypically female—”but rather a convergence and a sharing of roles.”

An embarrassing dirty detail has come out in the aftermath of the murder of Texas Deputy Darren Goforth. It turns out the woman who witnessed him being gunned down in cold blood at that gas station on August 28 was actually his mistress. Goforth’s mistress appears to have a real thing for men in police uniform, possibly being what LEOs refer to as a “badge bunny.”

Photography is not a Crime reports the following:

“She then fell into a sexual relationship with Sergeant Craig Clopton, who began investigating that murder, resulting in Clopton getting fired in October.

And now we’re learning she had a sexual relationship with Harris County sheriff’s deputy Marc DeLeon, who responded to the shooting death of Goforth.

That was an ongoing relationship that began before Goforth’s murder and continued after his murder. DeLeon was fired Wednesday for lying about the affair, according to KHOU.

Now there’s a fourth deputy under investigation who apparently also fell under her sexual charm as some point either before or after the murder, but his name has not been released.”

While it is shocking to some that so many officers at one agency would be sleeping with the same woman, according to one former cop it’s not so unusual [emphasis mine]:

“I know it looks like some kind of swingers society, but it really isn’t,” said former Houston Police officer Tom Nixon. “It’s people who have aggressive personalities who have low inhibition.”

Nixon said it’s not all that uncommon for officers to have sexual relationships with the same women. He said it’s a dirty little secret many don’t know about, but one that has now come to light.

For their part, police wives have turned to memes to protect their marriages from the sexual predators who target innocent police officers.

Side note: Women who pride themselves on their attraction to the boys in blue might want to read up on how they’re viewed in the profession. Those seeking a committed relationship might want to read this anecdote.  Those who have already committed themselves to drowning in blue waters can bookmark PoliceOne’s 8 Ways to Repair a Police Marriage After an Affair for future/current use.

A Love that Takes Your Breath Away, Literally

It’s well-known that law enforcement officers have a serious, largely unaddressed domestic violence problem. There is even a term for it, Officer-Involved Domestic Violence (OIDV). Some studies have estimated that the rate of domestic violence amongst police is two to four times as high as it is for the general population, and the International Association of Chiefs of Police has even developed a model policy for addressing domestic violence by police officers.

This is a topic we’ve discussed on the site before, but here are several examples of how loving the men behind the badge has worked out for some women:

For some former cops’ wives and girlfriends, the stalking, abuse, and murder doesn’t end with divorce or breakup:

5/6/16: Federal Police officer Eulalio Tordil kicked off a two-county murder spree in Maryland by shooting his wife dead as she picked up their daughters from school

Side note: Police wives and girlfriends should watch PBS’ A Death in St. Augustine for a preview of the kind of diligent investigation their romantic partners’ friends and colleagues will likely engage in should they meet an untimely suspicious end.

No doubt all of this will fall on intentionally deaf ears. Police wives and girlfriends have developed a whole self-identity based on whom they are married to. They are far too invested to entertain the idea that cops are anything other than self-sacrificing heroes and that the biggest risk to their families is not the unknown criminal on the street, but the same man they worry about “making it home at night.”