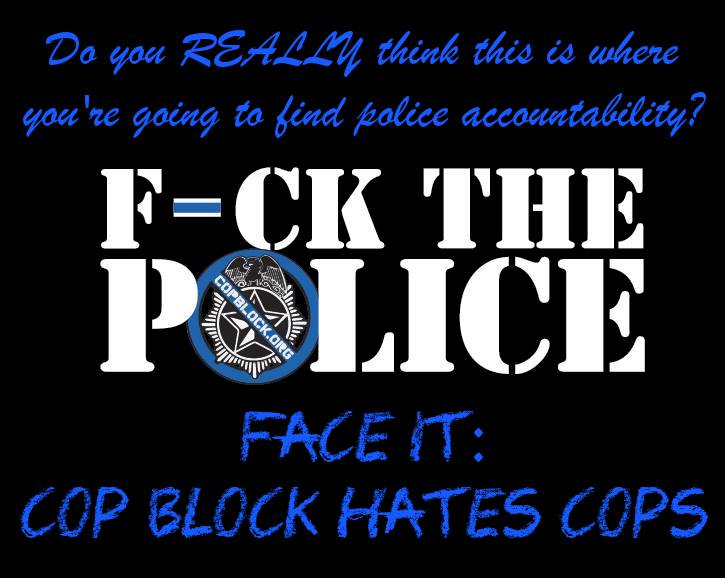 The many trolls of “CopBlock” (or CopBlock.org) are constantly claiming, “This [any random piece of CB content] is police accountability?” This is said repeatedly, therefore, I wanted to take a moment to clarify something.

“CopBlock” is not about accountability. There I said it.

COPBLOCK is simply the idea that “Badges Don’t Grant Extra Rights.” (READ MORE ABOUT WHAT BDGER MEANS HERE) CopBlock.org is a website that houses a “diverse group of individuals who believe Badges Don’t Grant Extra Rights.” CopBlock (the idea) does NOT promote, seek or attempt to gain any form of accountability. Nor does it advocate for any one size fits all solution because the one size fits all forced government protection is the problem. CopBlock.org (a website) doesn’t either because it’s a website whose purpose is to house a ‘diverse group of individuals’ content on police.

For example, Josh Hotchkin wrote a post called, “Accountability is Futile – Abolish the Police” where he states:

All of us here at the CopBlock Network have varying opinions about what the overall goal of our activism should be. There are many different ideas on what we hope to be able to, and believe that we can, accomplish. Not everyone wants to see an end to public policing. Some want to transition to that position over time. Others think that the function of police should be replaced with similar private services. There are as many unique ideas and approaches as there are individuals among us. What follows are my own opinions.

Accountability is futile. There really could be nothing so simple to understand yet so difficult to convey. Although it has been illustrated in endless individual cases, people are unwilling to hear the truth about the institution of policing as a whole. Yet, what it really boils down to is this- the police, the justice system and the rest of the state has a conflict of interest. Like any other system or set of complex relationships, it is duty bound to protect itself and those within it. A thing divided against itself cannot stand. So no matter what it must support its whole self, even, and especially its weakest parts. Systems are like living things. They desire growth, safety, harmony and most of all- to survive. Yet because the police are made up of fallible human beings with faults, it is inevitable that some members will become criminals themselves. Criminals empowered and protected by their authority. And because the larger organism must protect itself, it must prevent its weaknesses from outside attack. And accountability is that attack. So over time policing becomes a haven for the maliciously criminal and psychotically violent. Since police will protect their own, there is no safer place for social deviants to find a home to commit their atrocities. Because no matter what, a thing divided against itself cannot stand, and the police will do whatever they must to protect their own. Accountability is futile.

SEE THE VIDEO TO “ACCOUNTABILITY IS FUTILE – ABOLISH THE POLICE” BELOW:

Josh even created a series to abolish of police that you can read here. Clearly his content is not focused on any sort of police accountability but more towards a complete abolishment of government controlled, funded and legitimized protection services.

This also doesn’t mean that at times a secondary goal, or effect, of his work isn’t accountability. For example, Josh has been a key component in Autumn Steele’s wrongful death and the content – at first glance – might seem to be focused around gaining accountability since Josh has attended protest, wrote an open letter to Hill and has advocated for justice in the case. One could say he’s seeking accountability but that’s subjective to the reader, their own perception. Nevertheless, accountability (which could also be justice for wrongdoings/victims) is on the list of things to achieve but that’s only in the short term and a case by case basis because the system, by design, will resort back to protecting itself.

Even still, Josh’s content isn’t the ONLY content that makes the trolls say, “BUT WHERE’S THE ACCOUNTABILITY?” So let’s look at another…

Last summer DEO, currently jailed for filming the police, and I were out doing some CopBlocking. We came across a Parma, OH cop conducting a speed trap. In the video below you’ll see that after a conversation and filming one of the officers traffic stops I take my interaction with the officer to the next level. When talking, filming and sign waving didn’t keep the officer from extorting (if you don’t know the difference between extortion and issuing tickets; READ THIS) people on their drive home I modified my sign to say “Fuck the Police.” This triggered the trolls to cry loudly about “CopBlock not being about accountability.”

What did that video have to do with police accountability? Absolutely nothing. I too am done with the idea that police can be held accountable as a whole (accountability is only a temporary victory). My goals when CopBlocking, or making content regarding the police, are to spread the idea that, “Badges Don’t Grant Extra Rights” first and foremost. Yet, humanizing the police (because far too many of you worship the ground they walk on blindly) and (hopefully) inspiring others are also things I like to achieve with my work.

In this particular video I might not have conveyed that to the best of my ability but at the time I was solely focused on stopping the aggressive acts by that officer. I wasn’t exactly executing a game plan even though there were many tactics used that day; including conversing, filming and, finally, shaming. Which, for the record, shaming seemed to be what was successful because after holding the “F the Police” sign the officer ended his speed trap. I also was probably successful at two other goals of mine; humanizing the police and inspiring others. I believe this because for every comment that questioned ‘where’s the accountability here” there were others saying, “You can do this?” Or, “Damn, I’m going to do that next time I see someone pulled over.” And even if it was only one person, that’s enough for me.

So cry on trolls, I’ve given you the link to share that clearly states “CopBlock” – an idea – and “CopBlock.org” – the website – are not about accountability. Some of the individuals here might, some of the stories submitted here might but “CopBlock” can’t, it’s just an idea. Plus, there are far too many CopBlock Network Contributors, CopBlock Groups and diversity of submissions here to have any one particular goal, like holding police accountable.

What’s really happening here is an evolution of the mind. A change in how people look at what the police are doing today and how they can ‘police’ better in the future. Never has government model of anything withstood the test of time, so the American Police System will have it’s day. That’s for certain. Those that share their content here are hoping to make that transition a little easier for anyone out there willing to listen. Will it mean Josh’s abolishment, Severin’s reform or a mixture of whatever people can think of? Including, but not limited to, both public and private police with a multitude of options as far as protection is concerned? I don’t know but I know I’m playing my part by asking questions, creating content and doing much more than saying, “this is police accountability?”

Can you say the same?