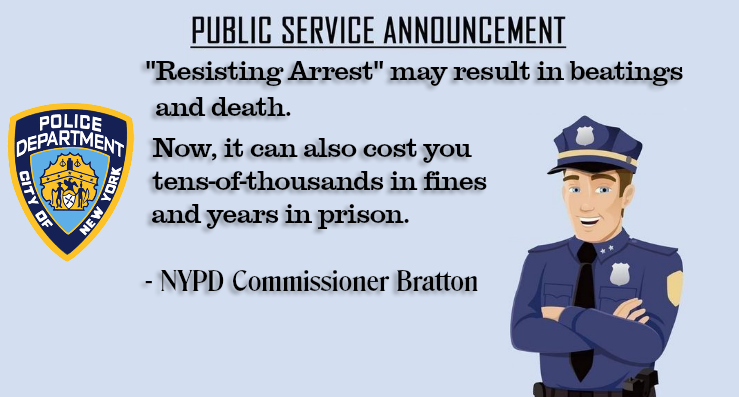 NYPD Commissioner Bill Bratton is trying to get New York legislators to make it a felony offence to defy the ‘godly’ commands of their officers. After a hearing on Wednesday before state lawmakers in Lower Manhattan, Police Commissioner Bratton told reporters that the charge of ‘resisting arrest’ should be raised to a felony. “I think a felony would be very helpful in terms of raising the bar significantly in the penalty for the resistance of arrest,” said Bratton.

‘Resisting arrest’, which is more commonly known as ‘contempt of cop‘, is a catchall charge that police officers use to arrest citizens when no other crime has been committed. New York’s WNYC had previously investigated the erroneous use of ‘resisting arrest’ by the NYPD. Here is what they had to say:

“There’s a widespread pattern in American policing where resisting arrest charges are used to sort of cover – and that phrase is used – the officer’s use of force,” said Walker, the accountability expert from the University of Nebraska. “Why did the officer use force? Well, the person was resisting arrest.”

“The vast majority might end up being dismissed,” he said, though he suggested district attorney’s at times dismiss such charges out of hand. “We’re asking district attorneys to treat them more seriously than they have been treated in the past.”

If Commissioner Bratton is successful in his bid, resisting arrest charges can result in a citizen being fined tens-of-thousands of dollars and spending years in prison. All of this is horrifically ironic, considering that Commissioner Bratton publicly stated that he’s against a proposal by NY Governor Cuomo, which would allow for more oversight and investigations against corrupt police officers.

As Gawker pointed out, here are just a few people that could have landed in prison for decades under the current commissioner’s proposal:

998
SHARES
FacebookTwitterGoogleRedditTumblr
DiggLinkedinStumbleuponMailPrint
You Can Support Cop Block by shoppping on Amazon using the banner below:
BANNERS ARE CLICKABLE