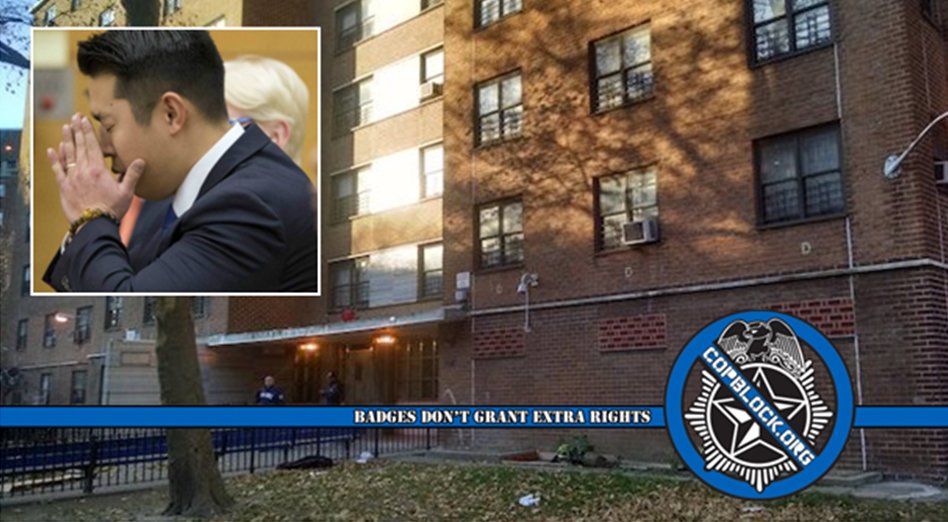 An NYPD rookie cop that shot and killed an unarmed man he encountered in a stairwell while patrolling a housing complex has been convicted of manslaughter and official misconduct.

The incident occurred on November 20, 2014 at around 11:15 p.m. at the Pink Houses complex on Linden Boulevard in East New York. Police said two officers “conducting a vertical patrol” inside the building were descending a “dimly lit stairwell” from the eighth floor when they encountered a man who entered the stairwell from the seventh floor.

That’s when officer Peter Liang discharged a round from his service weapon, striking 28-year-old Akai Gurley in the chest. He was taken to Brookdale Hospital where he was pronounced dead.

Gurley’s girlfriend, Melissa Butler, was on the scene during the incident and said her boyfriend wanted to take the elevator, but opted for the stairs when it wouldn’t come. She entered the stairwell first and he followed right behind.

“As soon as he came in, the police opened the eighth-floor staircase,” Butler said. “They didn’t identify themselves, no nothing. They didn’t give no explanation. They just pulled a gun and shot him in the chest.”

Butler said she and Gurley ran down to the fifth floor before he collapsed in a pool of blood. She claimed the officers never came down to check on the mortally wounded man, and medical help was only sent after she banged on a neighbor’s door for help.

Liang was on a probationary assignment with the housing bureau the night of the incident and remained on duty until he was indicted in 2015. New York City Police Commissioner Bill Bratton called what occurred “an unfortunate accident.”

“[Gurley] was a total innocent,” Bratton admitted however. “He was not engaged in any activity other than trying to walk down the stairs.”

On Thursday, jurors deliberated for 17 hours before returning guilty verdicts. Prosecutors said Liang showed poor judgment and that the shooting wasn’t an accident beyond his control.

“I was panicking. I was shocked and in disbelief that someone was hit,” a sobbing Liang testified in court. He said he was so overcome by the situation that he needed oxygen and was taken to a hospital for the ringing in his ears.

Prosecutors accused the rookie cop of recklessly shooting into a dark stairwell “for no reason” because he was spooked.

“Then, instead of doing all that he could to help Akai Gurley, [Liang] wasted precious time arguing with his partner about calling for help,” Assistant District Attorney Marc Fliedner said. “In fact, instead of calling for help, he just stood there and whined and moaned about how he would get fired.”

Liang is facing up to 15 years in prison for the second-degree manslaughter and official misconduct convictions. He will be sentenced in April.

Mother of the deceased, Sylvia Palmer, had some strong words for the officer before the conviction: “Peter Liang says that it was an accidental death. Peter Liang, my son was no accident. You murdered my son.”

In May of last year, Gurley’s family filed a wrongful death lawsuit on behalf of his daughter and mother, naming Liang, partner Shaun Landau – who was fired for his role in the incident on Friday – and the New York City Housing Authority as defendants.

That suit is still working its way though the system.